There’s a company here in Stockholm that has a quite neat looking 3D scene editor, in the browser. You can export from Blender to FBX then drag-n-drop into the browser editor for creating games, ads, and such stuff.

Now, getting rid of the FBX exchange format would be neat, or not get rid of totally, but for us using blender for 3dcc drag-n-dropping .blend files such as in unity would be really neat.

(and maybe a reality in the near future) 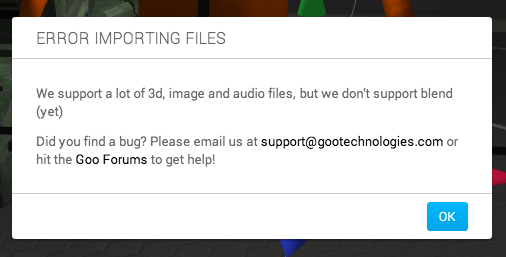 Video from their youtube profile, showing a tutorial how to model in Blender (basic) -> export to FBX -> Import in Goo Create.

it’s still in beta, I’ve find some stuff missing but going to their offices for a presentation and maybe give some feedback ideas, and get to talk some about the tech behind.

you can export unity3d projects to goo create, there’s really no big advantage in goo. but the material editor directly in the browser to see the materials is kinda neat. very wysiwyg.

still no support for .blend files tho

this is awesome! Thanks for sharing

This looks pretty interesting - while I am always suspicious of web apps and their performance.

I have to bookmark this - thanks for sharing!