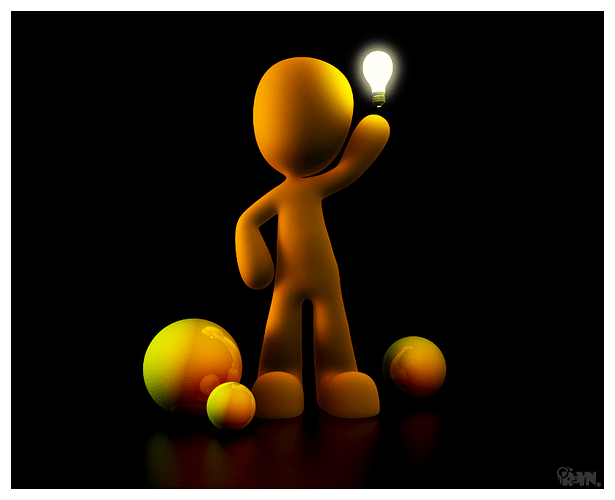 wow, thats a realy nice render, simple yet elegant. Only one little thing, i cant see the light bulb in the balls on the floor, (Could be just me)

Love it! Is OSA turned on?

Between all the extremely complicated and detailed pieces around here…this still stands out because of it’s simplicity. Great work

wow, thats a realy nice render, simple yet elegant. Only one little thing, i cant see the light bulb in the balls on the floor, (Could be just me)

Actually, you can see the reflection of the bulb itself but not the volume of the light. hehehe! Thanks so much, pal. I was really running out of ideas when I did this.

Love it! Is OSA turned on?

I notice that on the two left spheres that the transition form light to dark is a bit sharp. Did you forget to use the cubic light filtering on the material settings?

TheANIMAL: Uh oh, oops, yeah, I guess I forgot to turn it on. Just noticed in now. Argh. hahahaha! Thanks so much for noticing, sir.

Very nice, I like it a lot. TheANIMAL beat me to the banding problem, but I was also noticing that it’s a bit unclear where his face is supposed to be pointing. Maybe it could be angled up a little bit? It’s up to you.
Great in general though.

Love it. Could you show us the setup of the scene? I’d especially like to see your light setup. What renderer is this?

Love it. Could you show us the setup of the scene? I’d especially like to see your light setup. What renderer is this?

Hey, thanks. This was rendered with Blender Internal.

Here’s my light set-up (with one hemi, three spots, and one lamp):

Thats some good stuff! Very artistic. Doesn’t have to be mega detailed to be visually expressive. Sometimes its the concept and composition that counts! Really great.

I am volunteering to video one of our local peewee football teams games in this upcoming season. The reason is I have found out that about 7 of the fathers of kids on the team are serving in Iraq. (I live and work in a military town). It would be neat if the fathers could watch their kid on the web!

Anyway I thought it would be awesome if I opened the video with something similar to the animated crashing helmets they used on MNF a couple of seasons ago.

I have search my butt off looking for a video clip of that actual animation but cannot find it. (not that I want to use it, just to jog my memory on how it actually looked)…

I have downloaded Blender. And to start, I need a NFL helmet model.
Anyone have one they could donate?

The next thing would probably be to storybook the anim? (I’m new at this but more then willing to learn)…

I need to know how to render the animation that will be put on a video. Things like what resolution do I need to render in? What format should the final render be in?

Any help, comments, suggestions will surely be appreciated!

Of course if you are bore and would like to donate your time and skills
I would be VERY grateful!