Hey. Tell me what you think of it? I could tell you how I made it if anyone is interested that looks raelly nice! Please tell how u did it:) Is there a difference in rendertime?

Thanks! rendertime was about 30 sec… It is OK for me. 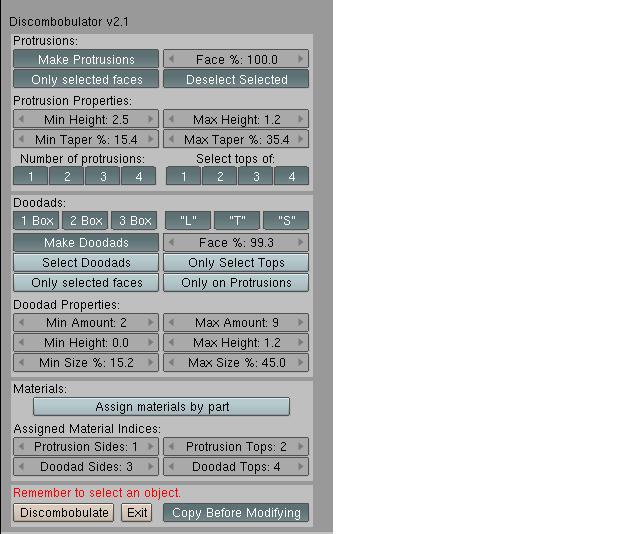 How many verts did that generate?

By the way, can this be moved to tutorial-section? And how can I do that? should I take call one of admins or something

Jason H, Hmm… I don´t undestand you´re question. Could you be more specific? I’m still a noobish and from Finland

how the he… I know

in the upper left corner of the blender window, while you’ve got the file open, look at the thing that says “VE:”. it will have a number beside it…thats the current number of vertices in the file.

Thats what we want to know…

interesting method but thats gotta be the most clumsy way of making grass. first off, selecting random vertices will get a bunch of single vertices and pairs, not all whole faces, and for things like grass, you really dont need the volume that youd get by running the Discombobulator script on a mesh. also, you dont get control over the grass movement or how it falls.
so basically you end up with a ton of useless vertices and faces (=bigger rendertime) and less control (you cant go back and tweak the grass without re-running the script and doing it from scratch).

i think grass could be achieved much quicker and more efficiently using particles or, failing that, RipStings fiber script.

with particles:
-create a plane
-go to the Anim Controls (F7)
-create a particle system on the plane
-under the Particles tab, hit Static and enable Rand and Even (under From:) and Mesh (under Display:)
-use Amount to adjust the density of your “grass”
-under the Particle Motion tab, increase the Normal Velocity a little to get your grass length
-to make the grass droop a little (no grass is dead straight, gravity always works) decrease the Z Force (-0.05 or so)
-for more randomness in the grass, increase the Random Velocity a tad

the beauty with this is that you can adjust any part of it later on and you see the changes immediately and particles can be animated and influenced by deflectors and wind objects etc. takes about 30 seconds to set up.
hope this helps.

Thanks, stompiTon for good post! That was very useful.

And I know that this is clumsy way, but I think that it would be nice if you have more ways to make something, grass for example. And if this is the stupidest (?) way to make grass, I’, still proud of it. And first time I was like “knewing” all the time what am I doing

eaglebreath
Tried and failed, although I did get a very interesting thing that looked like a city. (That will come in handy for another project I have been working on.)

Also, I agree with you on this one. When I tried this the first time I found a quick easy way to create a city. Not everything in your toolbox needs to be perfect and elegant and useful for one thing only. Now if I could just make grass…
J

That looks like cactus-city. I’m so ashamed now… what I did more… hmm…

First os all, Go to edit mode and the to mesh tool-toolbar

That will make some Nor-like to the model. and if it isn’t so good for your opipnion, then make the texture musgrave. Oh, and map to col and nor.

And I’m really happy if you liked the results

But now I try to find what’s went wrong