Surely some stupid questions here, as you know I am just hobbyist and not pro at all.
I’m missing simple ways to achieve repetitive/cycle things, like with modifiers in f-curves. I’m also not sure if it’s possible to use GP as Action/Track in the NLA editor. So, what is the way to work with GP when you want to easily get repetitive/cyclical animations?

good question! i also would like to know this… or if anything is planned in this regard…

i did 2d-animations with flash (over 15 years ago :)) and it was quite cool how you could use multiple timelines and easily reuse stuff at different positions in the timeline.

This new feature is so awesome. I’m already using it for a production project, i know that’s not safe, but even thought it’s just an alpha version, it’s already saving me a lot of time of work. I’m working on a very complex animation of 30 seconds long. So first of all, a big thanks to the developers and artists for this awesome work !!! i’m subscribing now to the blender cloud to help contribute in the further development of this.
I only have one remark and big request for now.
The big thing that’s missing in my opinion in GP is a more handy management of frames. You see, in a very long animation, sometimes you want to loop an animation, or just a part of one character. For now, to do this in GP, i have to click one by one with Shift + right click on the frames that i want to loop, and i have to copy them X times to fill the whole animation. And if unfortunately i want to adjust the drawing in on frame, i have to recopy everything again… First thing would be to allow users to shift + select the keyframes with clicking just the first and the last one (and bonus feature would be to allow shift copy between multiple layers).
And to go further more, why not make instaces of frames (like in Clip Studio Paint Ex). I know GP has an instance modifier, but the current instances don’t have a time delay option. It’s really a copy of content and frames synchronisation, so you can’t try to use it to fake a loop… Maybe just a time effector in the instances would make the job for now.
That feature would be sooooo useful also for lipsync and other complex thing in short animation films. imagine you have to animate lips and complex face expressions for a dialog. With frame instances, you would just need to draw a library at the beginning of your scene, and then place the instances where they are needed

Thanks for reading, and good luck for the beta launch !!
I’m attaching a preview of my current work with GP. Work in progress. It’s a 30seconds complex animation, with a dude riding a bike. You can imagine how many times i had to duplicate the animation cycle of his legs ! ahah!
blenderGP0|690x409 .
blenderGP1|690x388

I’m glad this is in, but even moreso that the devs brought up the following to current

The amount of bugs because of the mish-mash of not current issues within these major underpinnings will not be missed.

Both Master and Blender 2.8 have them updated, across all platforms. They aren’t backporting to 2.79a, but by omission I assume they will with 2.79b or just 2.79c when it is released.

That’s right, methods to achieve automation with different repetitive/cyclic/looping animations would be great.
By the way, I can not see the images/links at the end of your post.

Will blender 2.79b get a cycles edition? Blender and CG Discussions

Officially a/b/c releases have bug-fixes only but exceptions have been made in the past (2.78c had a bunch of cycles speedups in it) however, for an a/b/c release we generally keep the supported platform identical ,ie build with the same compiler versions, and supporting the same hardware platforms. For the current buildbot builds both of these things have changed, a newer msvc was required because the AO node code hit an avx2 codegen bug that a newer compiler fixed, and on the gpu side, we mov…

The amount of bugs because of the mish-mash of not current issues within these major underpinnings will not be missed.

If you had bugs coming from libraries you should have reported those, generally there’s no issue giving a lib a minor bump to solve an actual bug, if it’s just “having the latest make me feel warm and fuzzy” that’s a different story given every lib update takes several hours of the platform maintainers time , on windows i have to build and test the lib for all supported (x86/x64/debug/release/msvc2013/2015/2017) configurations which tends to be time consuming, thankfully with the recent drop of msvc2013 this is now less work but still it adds up really quickly.

Hero movie does not seem to have one repetitive sequence.
I don’t know if it was an artistic choice that was corresponding to the story or if it was a choice to have a story that does not require the use of loops.

If you are using an armature to animate layers, bones animation will have access to all animation features used for regular 3D animation.
Animation of transform, properties and modifiers of a GP object can become actions useable in NLA.

But tools to loop 2D animations were not just designed and built, yet.
You can not do anything else than just copying/mirroring GPframes in dopesheet.
It would be legitimate to have GP actions that could be repeated, scaled, overlaying…
Currently, you can duplicate an animated layer. Animation is copied.
Then in dopesheet, you can make a negative scale -1 of GPframes, make an offset and finally merge duplicate layer with original layer.

For now, to do this in GP, i have to click one by one with Shift + right click on the frames that i want to loop, and i have to copy them X times to fill the whole animation.

I know GP has an instance modifier, but the current instances don’t have a time delay option. It’s really a copy of content and frames synchronisation, so you can’t try to use it to fake a loop… Maybe just a time effector in the instances would make the job for now.

Hi Zeauro ! Thanks for the answer. The ctrl + right click indeed does the trick.
Well, let’s hope the override for animation delays will come soon !
Anyway, for an evolution of the tool, the frame instance copies would be a great improvement, and a way to persuade 2D animators that already use that in current industry softwares like TV Paint or Clip Studio Paint.
Yep i got some crashes wille playing with collection instances with GP, but it’s okay, we’re going to wait for the stable version.
Ok y try to upload again my preview images, i don’t know if it will work but it’s not very important, just to show what i’m working on. 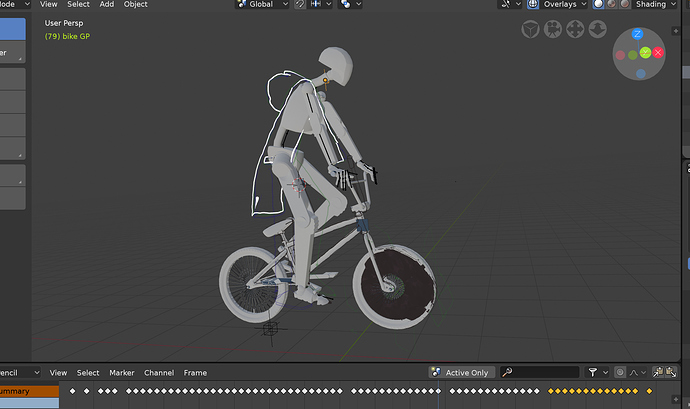 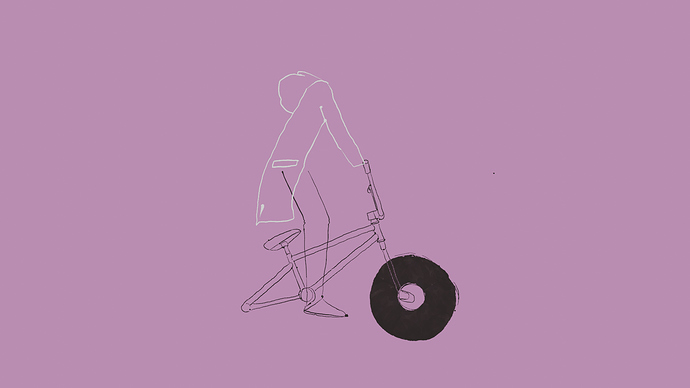 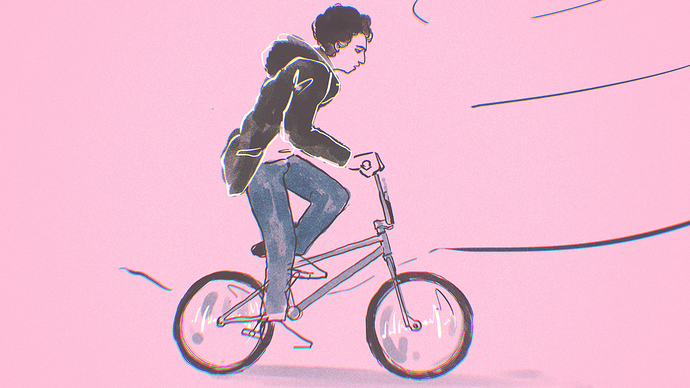 Any plans for a quick introduction tutorial on frame by frame with grease pencil. Even a simple bouncing ball example is enough to get us started. No good having this feature if we have to fudge around clicking this and that trying to discover the basics of how to set up Grease Pencil for simple animation. If such a tutorial already exists, point me to it.

You are not forced to insert a blank frame. It was a step just to have a first reference without jumping.
But you can directly draw something after frame change. It will automatically create a new GP frame.

To keep previous frame strokes in new frame, you have to press the last button at the extreme right of Topbar.

Basics of frame by frame animation with grease pencil are not more complex than that.

Thanks, I will look into it with these instructions.

After replying, I saw this video showing exactly what I wrote.

Animation of transform, properties and modifiers of a GP object can become actions useable in NLA.

Hi.
Do you mean that it is currently possible to do this?
I have tried to work with GP actions in NLA editor but I have not been able to get repetitions (most likely I am doing something wrong). At least it does not seem to work as actions with objects that we were used to. This does not create a GP action by default in action editor, and if you create one from Action Editor, then from NLA editor I do not know exactly how to work with it.

I mean that if you animate rotation of a GP object, you can create an action useable in NLA corresponding to this rotation.
It is same kind of generic property that is common to any object. So, it works for a rotation of GP object like for a rotation of a cube.
Now, if you animate a modifier of a GP object (a modifier or a VFX effect) : it works the same way, it works for animation of a modifier of a mesh.
But animation of GP frames can not be translated into an action. Because a generic object does not have this kind of data. It is specific to grease pencil. And there is no solution for that, yet.

Because it works for modifiers, secondary data ; it would be legitimate to expect it working for main data of a GP object.
For meshes, what is closer to that is support of Mesh Sequence Cache modifier used by alembic import.
And currently, animation of this does not work in 2.8 either.

@zeauro
But tools to loop 2D animations were not just designed and built, yet.

We need ‘linked frame copy’ for grease pencil, so that an 2d animator won’t have to copy-and-paste again when he changes loop part or repeated frame. Feature like that will also help automatic X-sheet creation.

Have you noticed this bug behaviour? I created two Grease Pencil Objects, added circles and blurred them. When I zoom in, they are aligned, when I zoom out - they are unaligned. The same effect is in viewport and render

It looks like a bug relative to samples of blur.
At each sample increment, there is an offset to right and top of screen.
This offset is more visible when drawing is small.

If you put exact same blur on both objects, they should look like having same center but not corresponding to objects origins.

Thanks for reply. I have another question: do anyone know if the new Grease Pencil will have the ability to draw on surface of an object like in 2.79?

It does - the option is in the topbar on the far right. It’s easy to miss.