I’ve been working on this Grey Knight for the past few weeks on my spare time and I’ve decided to add some background to make him look good. So I made a simple spaceship corridor to add to the scene. I really love how the Terminator turned out and I’ve put a lot of work into it. Please comment and critique on the final render so I may improve it where I can.

This is the final render so far: 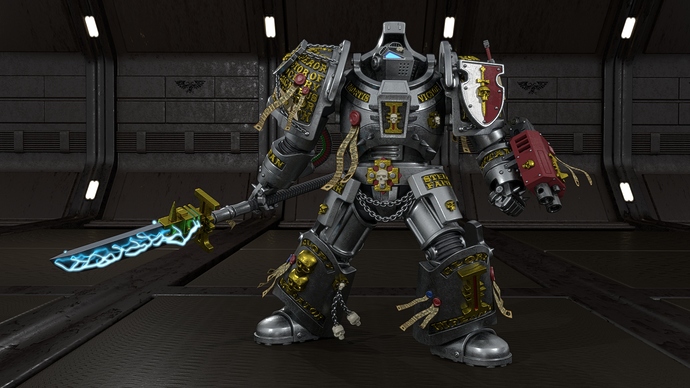 This is the model without the spaceship corridor: 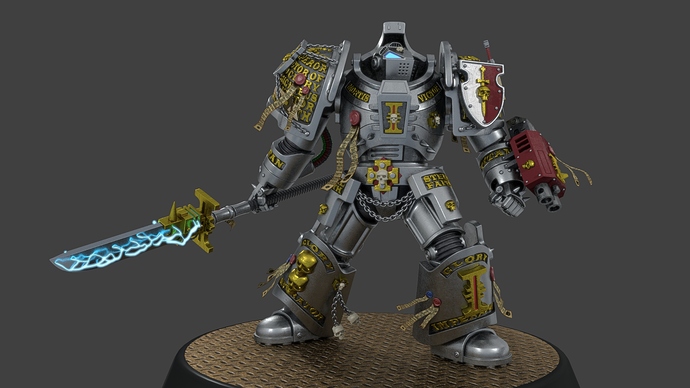 Comments and critique are welcome.

Very nice work. Great model. I have a fondness for art based on the wh40k universe.

I can’t say I see anything “wrong” with the image. It just lacks impact. Maybe because the lighting is too general in nature. I’m not a lighting expert by any means. But something darker, more atmospheric might work better. Strong back light. A more focused key light. I suppose it depends on what you want to do with the image. If you’re presenting the model, the lighting does let you see the form very well. But if you were trying to create something a bit more artistic, it could use some tweaking.

Thanks Macser for your kind words. 40k fiction and models were a big part of my childhood (and adulthood :P).

I actually made the scene just to showcase the model but now that you mention it and I look at it with a different eye, it does lack impact. It wouldn’t hurt if it had some more “atmosphere”. So I’ll try tweaking the lights and I’ll post a new render.

the metal looks a bit fake, especially the sword and the gold. Maybe add some grunge or work on the lighting. The electricity seems to be a bit off too. Excellent modeling work. I always thought warhammer would make really good 3d models because the characters have so much going on. And how did you get the words on the armor? im guessing it was either text being controlled by a curve or it being projected onto the armor.

I tweaked the lights, added volumetrics to the scene to add “atmosphere” and corrected some issues with the texture of the floor. So this is the final result rendered at 2000 samples. Also removed some stray fireflies in gimp 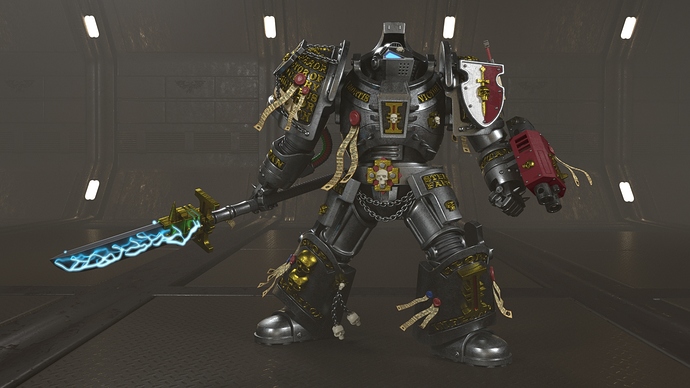 Is there an environment light, or a HDRI? For me, the reflections on the metal aren’t reflecting the world around it. So, it looks a bit fake, but adding an HDRI would greatly assist in the metal look. Also, the electricity should emit reflections on the surroundings, and as I can see from your latest render, it doesn’t affect the surroundings. I think a strong rim light from the behind would help the model stand out a lot more! Great work!

Now it is a little bit better. Try to add some depth of field to camera. You can add Glare Node and set it at Fog Glow, in Node Compositor, to achieve more blur on lights. And the last thing. In my opinion is still something wrong with the lighting. The model is too much brighter than the corridor. For example, compare a brightness of floor and shoes. Shoes are too bright. If lighting is ok, maybe you can try to make some changes in shaders, to match colours of corridor and armor.

Thank you all for your replies!

@Renamon: Modeling is the easy part, making it look good is the hard part… Yes the writings on the armor were made using text controlled by curves and the chains too.

@abalaich: I used an HDRI light for the reflections on the metal and a 3 point light setup to light the Grey Knight and make him stand out from the background. I tried using a stronger rim light but it lights up the fog too much and makes the background disappear. I could though enclose the whole scene in the corridor to make the armor reflect it, since now I used the corridor only where the camera can see it to save up on pc resources and render time.
The lightning actually casts a reflection but it is so faint its hardly visible, that’s mainly due to the fact that all the lights have an emission value in the scale hundreds due to the volumetrics and the lightning has a value of just 5. I didn’t make it brighter in fear that it will become too bright and the detail of the lightning and the halberd will get lost in the glare. But you are right on that, I could play a bit with the value and see what happens.

@PawelBrzu: I was thinking about adding DOF but I actually got lazy

but you are right, I should add it. I’m already using glare to blur the lights and the lightning but I haven’t tried out the Fog Glow so I’ll give it a go and see how it looks.
The model is intentionally brighter than the corridor since the main purpose of the scene from the start was to showcase the model. I don’t know if it looks weird this way but I could try to make a test render with only the corridor lights on.
As for the brightness of the shoes in contrast to the floor, the way I perceive it, it’s natural since the armor is much more reflective than the floor. If you put a tin can on a rusty plate and light it up with a flashlight, I feel you’d get the same result more or less.

Thank you all again for your input. I’ll make some changes based on your suggestions and i’ll post some new renders soon. (It takes ages on my pc to even preview the scene let alone actually render it :P)

its a great model and a lovely turn table piece but i would make the corridor scene more dynamic. repose him into a combat pose and reposition the camera to create a story. darken the lighting in the corridor and maybe add more details to make it look like he’s on an assault mission. perhaps some chaos iconography on the walls. it will take a bit more work but it will be worth it

Definitely looking a lot better. Some of the suggestions others have made are good though. The force weapon could be made more of an emission source. How you approach it though is up to you.

One thing that may add to the image would be some “companions”. A couple of other copies of the model viewed side-on. Of course that would also add to the render time. But it could add some kind of narrative. As if they’ve just teleported into a hostile zone. Maybe it’s too much of an ask time-wise. Just thought it was worth a mention.

And of course it gives the viewer a look at the model from different view points within the same image.

“Art is never finished. Only abandoned.”