I didn’t say it in the title, but this is for the cgtalk contest, spectacular. I don’t like mentioning that it’s for the cgtalk contest, because then inevitably someone always mentions how great everything at cgtalk, and how I am no where near their level. I really don’t care and don’t want to here it, all that matters is that I learn from the experience, so I can make the next image better, and yes, I did indeed learn a ton. I changed a lot from my other thread, and appreciate all the crits I got; hopefully this is a little better. Without further delay here it is. 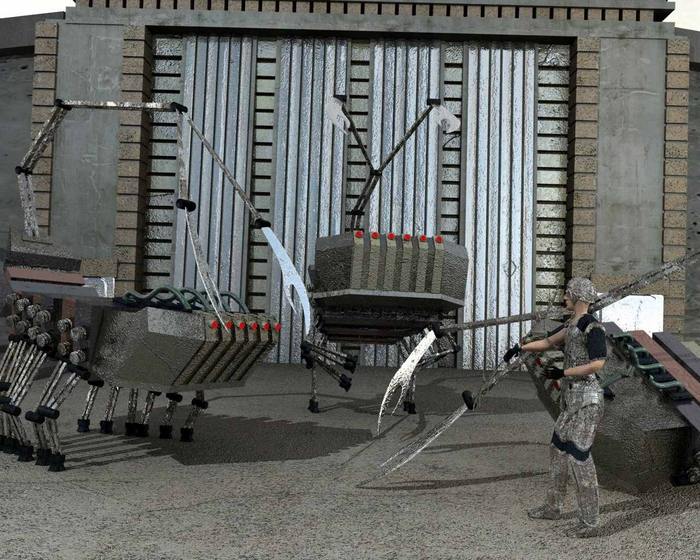 thanks for all the help everyone

I sincerly belive you have a pretty decent chance, and as far as I know, getting realistic results in blender can be slightly harder than in another high-end program. That is to be amired! Great job, really!

It could use a more interesting pose, and a higher quality rendering, as it’s quite grainy as of now. The robot models are also a tad simple, but other than that, it looks good to me.

I don’t know if you still want crits to improve it but anyway here is mine:

I would scale up the robots so they are at least 2X bigger and 2X more spectacular so their shadow cover the poor fighter!!!

Also, try to give your human char a more “moving to save his life” pose!

It could be a dark sky with dark clouds…

I drew a quick sketch I made with paintbrush to demonstrate what I mean, use it if you want or forget about it, just a suggestion !! :

EDIT : OH, i got another idea: his red robot eyes could emit big red lights that project on the monsters and the ground (to make the scene more chaotic and to set a mood).
Also, if possible, the guy facial expression could say “im angry” even if the character is smaller… dunno!

yeah, he needs a more “KAWAAAAAHHHHHH, KI KI KI KI” pose, right now it looks more like a “meh!” pose. Overall, i like the render.

I hope to see how you do on the tournament though, its really a great effort, i really like batman’s sketch, its a great suggestion.

first thing i thout win i seen it is does anybody got a beer cuz them guys got more then inuf can openers. but i really like the picture but i would add some depth to the blades and abit more detail on the legs if it where me maybe the style your going for. at anyrate nice work

I agree that the soldier’s pose is too basic and the robots are too simplistic. Otherwise it looks good.

Thanks everyone, I will be sure to let you know how I do.
Also great suggestions, but I think I am done with this one atleast for now. Right now I am working on “Project Freeze Miser”, I dont know if anyone remembers the WIP. I always pick this up during the holidays, and hopefully will finish this time. My next cgtalk entry will most def be better than the last, and I will need all of the crits again.