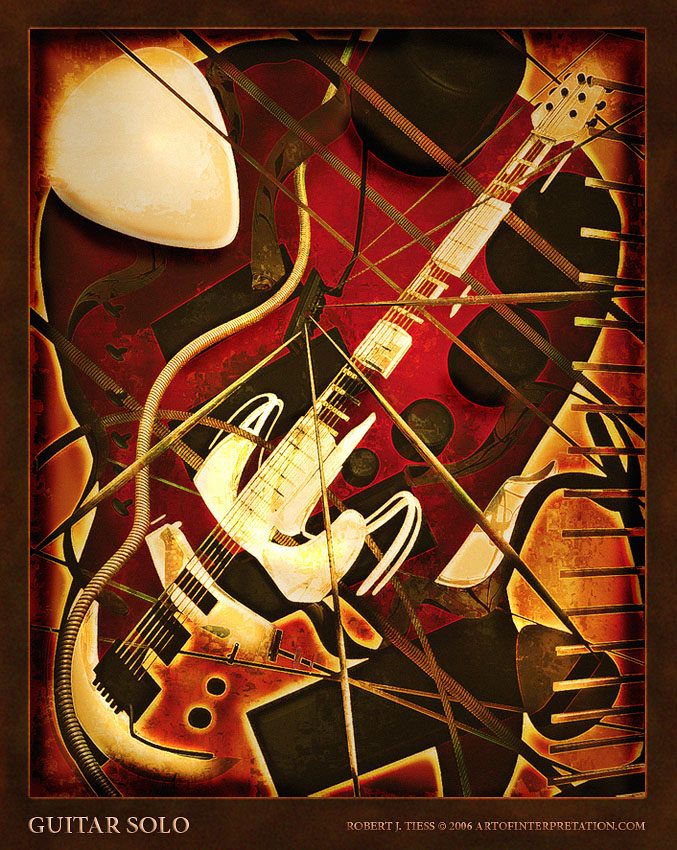 Inspiration came from my experiences as a guitarist (acoustic and electric) and my admiration of artists like Picasso (most notably and relevant here “Violin and Guitar”) while interpreting the feel, power, expressiveness, spectacle, and dynamics of the electric guitar.

For this project I made use of a guitar pick and a guitar which I made for a past weekend challenge at BlenderArtists (my “Heavy Metal Alien”).

Here we see the instrument from various angles, along with pickups, strap flying, strings, knobs, frets scaling the scene. I also enjoyed contrasting somewhat of a vintage look with more of a contemporary guitar.

Man, this one made me cream in my pants. Composition, colours, textures, shapes… strong stuff, man.

i hate u… he stamps these out like every day, and all of them are perfect

just a question
do you make anything but abstract? i love it but just wondering if you made anything else lol

The dirt effect and the brown colours make this again a great work of art.
P

First off, someone get Sago a towel or a hankie…

The guitar stings are perfect as well. How did you get them to stay so tight with the curve in them?

I have to say that this, imo, is your best image to date. Without question.

Maybe a little confusing, but perfect!

I’d say this is one of the best abstracts ever done in Blender. It is absolutely perfect and seems to cement yourself as one of Blender’s best.

This piece is great!! Wow!

Seems as un-3D like as anything can be, feels like a painted piece. I dig that
style! Lovely!
//Mathias

Good god man! How the… but… Damn it! Man you really are talented.

I love it!
It really does look like it was painted by hand.

Great one, this would have to be one of my favourites!

It seems his moto is

All your galleries are belong to me

Nah seriously truely good work im not to keen on most abstract stuff but you put meaning behind your pieces which is nice unlike just randomly placed cubes to make a pattern.

Nice job fast turn outs i’m guessing you have caffeine sweets lol or do not sleep.

Nice job fast turn outs i’m guessing you have caffeine sweets lol or do not sleep.

He just has the ability to churn out near perfect to perfect works every day if he wanted to. Something I have failed at so far but that’s for another topic.

Oh, and lots of practice.

damn, this one is awesome…

Always interesting to hear how people react to my work!

vitaliy: Haha, thanks so much, vitaliy. I actually do mostly non-abstract work, but for me, the way I try to approach my work, is that it’s not a matter of breaking things down from abstract or non-abstract, just pursuing whatever form the ideas must be expressed in.

vliegtuig: Thank you, vliegtuig. The textures, a mix of procedural and custom made, were integral in finalising this piece, so thanks for noticing

BgDM: WOW, thank you VERY much, BgDM. I’m really excited how this one turned out.

eaglebreath: Cool, thanks! I wanted to have a bit of contained frenetic energy here, something to visualize how it feels when in the music and there is just you and the instrument.

Cyborg Dragon: I really appreciate that, Cyborg Dragon. I believe everyone has the potential to be an awesome artist, or awesome at whatever they want to do. The road to this point that I’m at has not been easy or fast, without challenges or frustrations or doubt, but I also know I have to keep going on no matter what because there have to be better things ahead and within me. It takes a lot of effort and sacrifice, but I believe it’s worth it. It’s almost like a double journey to a new world in a larger universe than we ever imagined and also a journey back to ourselves, who we really are, what we really want to be, what we really want out of life.

The M.h.p.e.: I’m grateful for the supportive feedback! That very quality you describe is one of the things I enjoy most about my Blender projects when they come out not like typical 3D renders.

Framedworld: Thanks so much, Framedworld. I think everyone has many hidden talents.

Some coffee sometimes. Sleep is the often the price I pay for these projects. The ideas are essential, and starting out with something to be interested in really helps get a project finished I find.

BleedForMe: Thanks so much! About a week of constant test renders and adjustments well past midnight went into this, so I’m really relieved to have concluded this project in such a fulfilling and enjoyable way.

BleedForMe: Thanks so much! About a week of constant test renders and adjustments well past midnight went into this, so I’m really relieved to have concluded this project in such a fulfilling and enjoyable way.

Well it seems the result was worth it. Did the test renderings and adjustments take a week or was the modeling and initial texturing part of it?

Wonderful, Mr. Robertt. Excellent work on this one. Just a perfect image. In all aspects. Could definitely see this in a museum one day. Just a superb work of art. Agree with BgDM that this is one of ur best. 5 Stars.

EDIT: I really think you should post this on CGTalk and see what they say.

The pick and guitar came from previous weekend challenges as I began to say in my top post. The real challenge though was the materials, the lighting, and the render quality.

I tried various light setups, materials, compositional elements, and render settings. The guitar is something very important to me, so I wanted to get this right and do the concept some justice if I could.

At one point I tried a completely different treatment based more on node curve inversions, which I’m glad, in retrospect, I to have abandoned in favor of this final approach, which required more effort.

The paragraph above also parallels the way I approached the guitar when I was younger, thinking it would be and should be easy but then quickly learning how much discipline and sacrifice it would take just to sound decent.

The building up of callouses, something necessary that happens when you play guitar repeatedly (yet painfully when you first start out) is a good analogy to the artistic experience, I think: the instrument almost punishes you, demands you to tame it, care for it, or it can almost eat you alive and leave you feeling confused or angry.

But then you stick with it, and I mean a total full out commitment, and then harness and respect its power, and suddenly the instrument works more with you than against at some point, once you get past all the intial trepidations and musical theory and just get into a good musical vibe.

And that’s when something nearly inexplicable and amazing occurs down the road, after you stay with the instrument through good and bad so long, something like a real freedom, something that can become a seamless integration of mind, muscles, and air in a seamless stream of sound. You become the music, or the music becomes you in a sense.

There are few feelings in this world like that.

For me, Blender is an instrument of a different kind but one that can work and flow and produce creative sensations in much the same way and offer freedom of another order yet.

GmL: Wow, thank you very much for the great feedback! It’s probably one of the images closest to me that I’ve made in a while, so maybe that helped give it that little extra intangible something

Your best in a long time, RobertT – and you make great stuff all the time, so that says a lot. To me, your latest work seemed to be getting somewhat formulaic – very good technically, but stylistically all very similar, and somewhat bland and lacking emotion.

This one, though, has both the technical side and the artistic side. It’s a wonderful decomposition of a guitar; I love the frets off on the right, and the missing parts of the neck.

I generally am not to big on abstract, but this is gorgeous! Exceptional, inpiring, speachlessenating.