This is a work in progress but I decided to throw it out to get some feedback. I know it’s pretty raw, the guy seems too stiff and there’s something funny about the way he walks.

Right now I’m stuck with getting the arm back down in a natural way, since I’m using IK to raise the cannon it gets a little complicated to release the influence and lower the arm.

Hello R3po, is this your first attempt at character animation? If so, not bad.

Here’s a few images to help you with your walk cycle - the principle is basically the same for 2D or 3D. 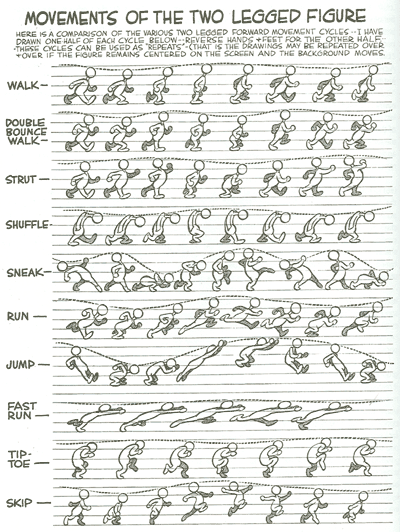 He seems to be pushing the cannon too easily, cannons are heavy, I would recommend having him lower down and have the cannon move in burst as opposed to sliding along smoothly.

Patient190681:
Awesome! I needed that! Yes, it’s my first ‘serious’ project, but I’ve done some exercises and also bought the character book by Tom Mullen so that’s been a lot of help.

Smelz:
You’re correct. The question is, how should the skinny blue guy interact with the cannon? Should the cannon be parented/influenced by the guy or should it be the other way around? Right now, I have two empties parented to the cannon base and the arm IK’s constrained with a copy location to those empties, so I move the cannon base and the arms follow it, then I manually move the pelvis bone of the guy to follow the cannon. The feet rigs are parented to the root bone, not to the pelvis bone to prevent skating.

Thanks for the input!

. The question is, how should the skinny blue guy interact with the cannon? Should the cannon be parented/influenced by the guy or should it be the other way around?

Firstly, do not parent the guy and the cannon - if you want a good result, step up and animate them separately. Secondly, the cannon is big and heavy - so it will resist movement and will possibly roll back (or forward). It’s movements should reflect this, just as the guy’s movements should reflect how heavy the cannon is. Think back to your own question: how should the skinny blue guy interact with the cannon? Pretend you are that skinny blue guy and try to push a car or something heavy with wheels; record your efforts if you can.

Guy pushing a set of shelves (by ptrathos)

I appreciate your help. I think I’ll start over with the push. Thank you!

I reworked the push sequence, here it is:

I changed the approach and do a static animation of the guy while moving the root bone. The arms are IK’d to empties that are parented to the cannon. The problem is that now I get a little skating so I guess I’ll have to key the root on every frame.

Yes very nice! We get a feel of how heavy the cannon is. But it still seems like once it gets going it goes effortlessly for a second then stops like it is weightless and then is heavy again. Looking great though!

Ok, so I guess I need to mess with the IPOs a little. Thanks for the comments!

I think that you should only get one push from every step. I you were to push somehing really heavy you would take position like a short distance runner, then push all you could 'til you got some motion and when your leg was fully stretched you would stop becuase there is no way you can change footing whilst moving the object. It’s just a thought, but I think that’d look more believable. And perhaps not let his hands move around, it makes it look as if he’s pushing the cannon with his arms, if that’s the case then it would be light enough to be pushed from a erected stance.

it’s very jerky… but better than I can do so…

New delivery! I decided to split the animation in several shots, making it easier to animate in small chunks.

I know there’s still a lot to improve but I want to hear (…I mean read) your opinions.