I am working through a new workflow I recently learned to quickly concept out low poly weapons and other objects. The first step is to draw and render the object in 2D, then apply the image as a texture on a plane, then extrude/shape/cut the concept from the plane, and finally mirror it. Optionally, you can do a touch-up using texture painting in Blender to hide any seams or warping. It works best on symmetrical and flat objects like a sword, a gun or a staff since you need to draw it in such a way that you can see every side of the object (except the very ‘back’ side). The benefit is that you do the concept/texture in one go and the modeling stage is relatively simple. Less time = more concepts :D.

I’m currently working on a set of weapons. Here’s the first one (a sort of war hand-axe): 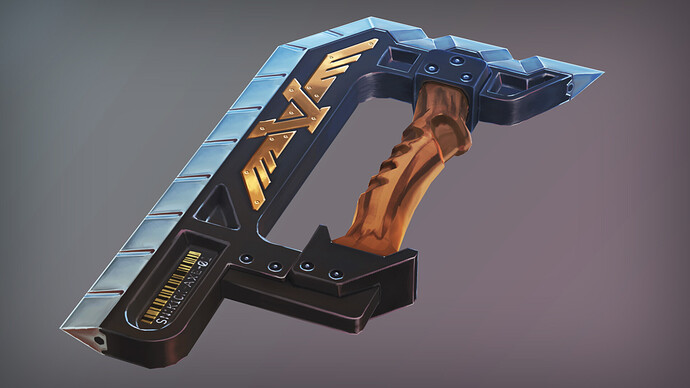 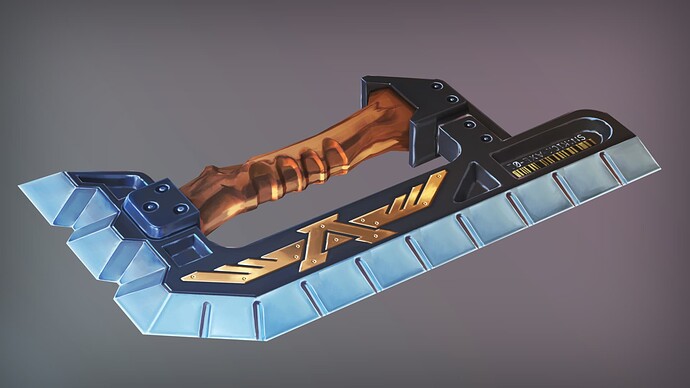 Here’s the hand drawn concept I made before modeling it out: 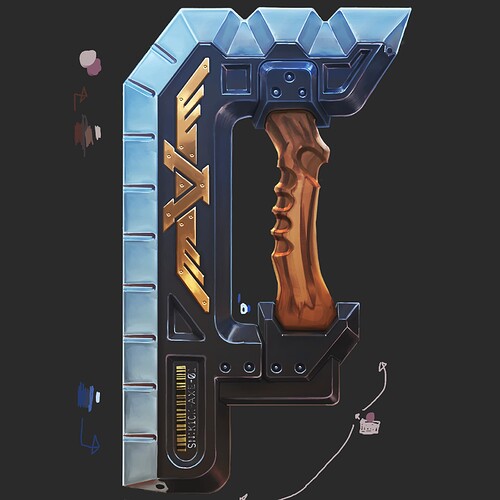 Learning to draw in a sort of “omni-perspective” that wraps around to show all sides was a little weird at first, but I got the hang of it. Modeling it out was also a bit of a weird challenge since you need to cut the shape out of a flat plane and not distort the UVs too much.

I’m currently working on the second weapon in the set and will update later. Any feedback or criticism is really appreciated.

I like the creative concept (quite inspiring for sci-fi stuff) and the workflow seems to be just good enough. Looking forward to see the next weapons on the sequence.

Btw, ¿I guess you do mean “technical (or engineering) drawing” when you say draw in “omni-perspective”? Just like this draft:
engineering drawing

It’s not quite an orthographic view but is similar. Here is a diagram of what i mean by “omni-perspective”: 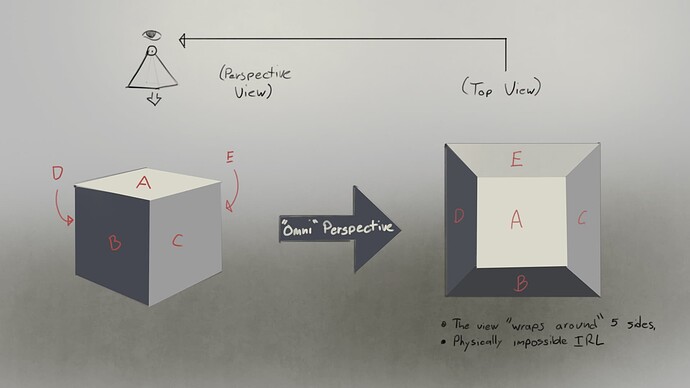 I drew the weapon as though I could see all sides at once (in an impossible way) from a top-down view. It’s almost like what would happen if an elephant sat down on a box and squashed it. The goal is to have full texture coverage over the whole object (except the back) so you can cut/extrude/shape the object from a textured plane.

Here’s an overview of the process with a simple textured cube:

I hope that explains it.

It does. Thank you for the explanation; the way you’ve described it firstly didn’t give me the idea it was about this. Sounds pretty interesting.