help needed, weird deforming, where are the rig masters?

i have a character tied to an armature, and working ok for me, but when i try some poses it deform very weird, i tried to check other setups, i mainly checked sintel rig and it deform in the same weird way, tried to play with weights and mesh density but no good.

this is an attached .blend if anyone can help me

an image for quick look. 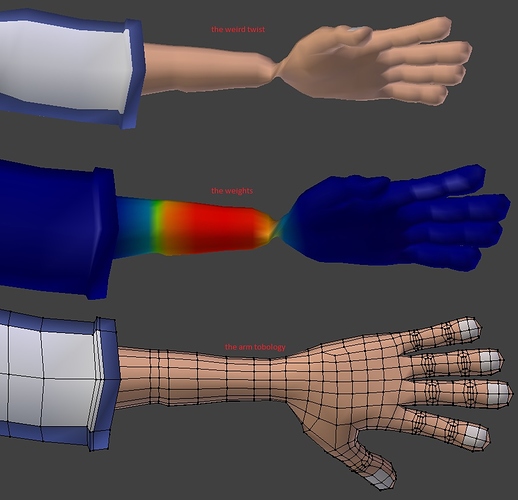 what poses are weird?

After looking at the file… the first thing I noticed is that you have an IK hand setup… when you move the IK hand the Elbow bends in all 3 directions… you need to lock the elbow off such that it only has one Rotation axis… on most setups you would simply do this via the 3D view’s Right hand tool bar… goto Transform… then Rotations and click the lock Icon on two of the axis that you do not want the elbow to bend on… (in your case in the blend file I would lock off X, and Y…) HOWEVER… (don’t mean to shout but what I have to say next is really important…) in the case of using IK you don’t do that… instead you goto the Properties panel for the ForeArm Bone… Properties … Bone (bone Icon at the top)… then find inverse kinematics… you probably will have to click it to open it up… and there you will see a set of Rotation locks… use those… lock off X and Y …

what poses are weird?

the rest is twisting wrongly, if you reset the pose then rotated the hand_c.ik to face above.

i tried both the properties panel and the ik locks, nothing happened!

I am having the same issues with Ik.

I am not sure if IK follows limits or something does not work well but dont forget to check the roll of the bones they should be horizontal bones z-axis up (press control+n, z in edit mode) and vertical bones with Z looking at the front (control+n, view option in front view) If i am not mistaken (my bones rotate well like this and are not misaligned).

@quadface:even after correcting the roll as you mentioned same weird twist.
i tested the free flexrig mentioned in this forum, and it behaves the same, does anyone have successful wrist rig?

NOTE:updated the first post with an image to the problem

I am checking up your file.

Everything looks ok to me, in Rigs I have recently seen they use B-bones for arm twist and low influence, so Im trying to do it with normal Ik bone.

I think may be you should use 2 or 3 bones, May be applying constraints to the lowerarm, but the problem is IK limits it doesnt follow constraints very well

Check this out, not a 100% fix. The thing is, when IK turns out weird its better to control the Def bones… thats what I did, hand bone limited rot and IK copying a little less of that rot… well may be not the best solution xD but I tried.

@quadface:thanks, but that won’t work as it disabled the pose i’m trying to achieve which is naturally opening your hand to get something.

i wonder where are the rig masters?

The ring of quads that is crushing in the wrist is doing that because there are two bones that influence those quads. They are probably the forearm and the palm bone. When you twist the wrist like that, one bone tells the verts to be one one side of the arm and the other bone tells them to be on the other side. When you average the instructions out, the result is that the verts crush into the center.

There are a few fixes for this.

i’m trying to change the topology, maybe it will help!

Hi! You could try using a pole target for the IK constraint. You may have to do something about the shirt though. Good luck!

Okay … after seeing your PIcture… and re-examining your file… Do this…
Select your Armature… Tab into Edit mode… Select the bone “Arm.L”… in the Right hand tool bar of the 3D window find Transform… under that find the text box “Roll” Left click in the text box and type “0” (Zero) hit return… then Select the bone “ForeArm.L”… Got Transform… Roll… Type 0 (Zero)… Then select the bone “Hand.L” … Goto Transfom… Roll… Type 0(Zero)… Select bone “hand_C.L” … Transform… Zero…
Now Tab back into Pose mode… Hit A… until all bones are selected… then Hit “ALT+S” then ALT+R then ALT+G… to clear all the bones back to default pose… no see if that fixes it…

sorry for being late, got swopped with work, and thanks for trying to help guys.
@daren:the twisting still happen on your last file.
@norvman:i already did that, i tried other rigs, same twist.

i think i need to re-topology the wrist.

sorry for being late, got swopped with work, and thanks for trying to help guys.
@daren:the twisting still happen on your last file.
@norvman:i already did that, i tried other rigs, same twist.

i think i need to re-topology the wrist.

Be realistic – there is NO possible way to rig it that allows you to bend the wrist 180 degrees – and the wrist is incapable of rotating that far. Make sure that you are trying to rotate the wrist in realistic ways

Make sure that you are trying to rotate the wrist in realistic ways
check this model out, simple but good topology, and it twists good.

Here is my take on it, it’s a bit complex and I’m sure that there are easier way to resolve it… or to make it better… and my version isn’t 100% smooth…

I had a look at at the wrist, so that I can use the rotation on Y and multiply it by 0.7 with the driver so that the bone forearm would rotate less than the wrist itself. Also I remove some of the mesh, added a smooth modifier and put the sub surf higher… that give you more 270deg of rotation that aren’t too bad. There is a need to work a little bit more on the paint weight around the wist and modify some stuff for avoiding some flipping.

I’m sure that are more simple and better posibility!

check this model out, simple but good topology, and it twists good.

That’s the same as the B-bone example you posted above. It twists up too if pushed as far as you are doing.

There is going to be twisting no matter what. Bad twist when you rotate that much without the elbow following, and jagged looking like that when low poly.

Put a pole target on it and use it to move the elbow up and down (rotates when arm not bent) when you rotate the hand to extremes -like a real arm has to do. That will help lots. That along with the other advice offered above is about the best it gets I think.

Your only other option is to robot rig it. A separate wrist/hand with a long sleeve or wrist band or something to cover the separation.

Really? My file doesn’t work? … no put down intended here… honestly… but what the heck are you trying to do with your rigg? LOL!

@mathiasA: thanks,and it helps, that’s the best result so far, and nice rigging, but still i think re-topology is needed and easier, the forearm mesh shouldn’t give this weird twisting, i’ll do one and post (if Allah wishes).
@LarryPhillips:already added one to the rig, i need it anyway, but doesn’t change the problem.
@norvman:lol, nothing unnatural :), just opening the hand!, cheke the rotation on the y axis, a shot from your fix down: 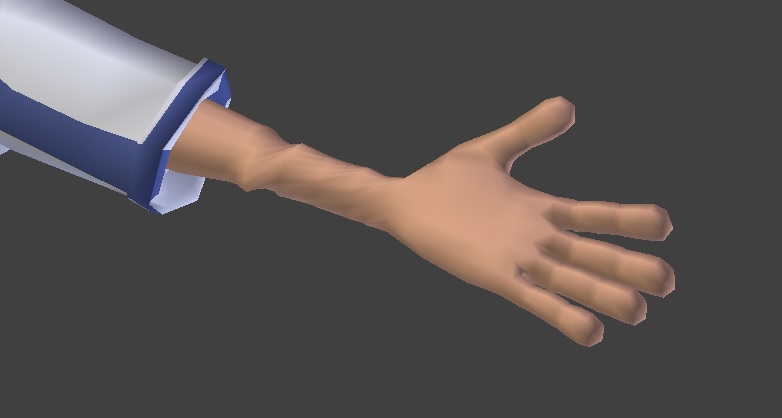