[Help] Size depending on distance from camera 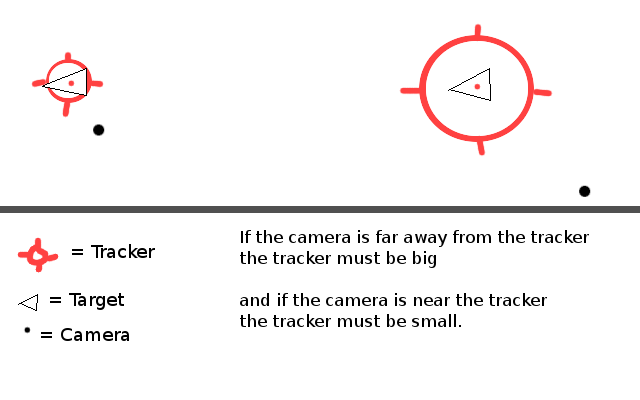 I tried it in python with getDistanceTo() but that went wrong:(

So maybe the tracker shouldn’t be an actual object attached to the target?
Maybe you could put it on an overlay scene, like the HUD it is (supposedly) meant to represent?

To be honest, I haven’t done this one in particular, but I do know there are some handy functions for it.
For example, You can check if an object is visible with:

Finally you should set an object on an overlay scene to this position, with something like:

And have a camera looking down at it.

But yeah, that’s the complex way. The script you’re looking for probably goes like:

i had to do

Hmm, interesting that 0.2 was the magic number here, I expected it to be squared or square-root.

The number will depend on the camera frustrum size/field of view. It would be interesting to find the link between view angle and distance/scale falloff.
Someone with a little more knowledge than me could probably figure it out easily enough.

I may have to play with this a little when I have some more time.

There’s also another appoach. The cursor could be a child of the camera.

Here’s an example of positioning a mouse pointer object locally on the camera. (Mouse_Pointer_00.blend). Even when the player moves and turns the pointer stays in place. Notice that it’s also adaptable with the lens of the camera.

This example works with the mouse position, but if you replace this with camera.getScreenPosition(object) it should work.

Edit: I’ve added an example to show how it works with getScreenPosition. (Target_tracker_00.blend). Use arrows to fly.

Thanks Raco I will look at it

That worked out the best