I’ve been in and out of 3D (just Blender) for quite some time, although the sum of my total 3D “in” time marks me as a noob. I have a very chaotic way of learning things (once I learned the basics, of course), meaning some day I want to acomplish some particular effect and make some scene to try it out. I do watch tutorials but I never make the object or the exact same thing I see on the tutorial. I always try to apply the techniques I’m seeing to the scene I want to make.

Well, I suppose that’s not interesting for you, the thing is that these days my “chaotic way of learning things” has led me to want to model and texture a “realistic” axe (and then, a sword). So I modeled the axe and went into the uv mapping (I’ve never unwrapped anything more complicated than a cube to make furniture and so) and this is where the problems came. I can’t for the life of me have a decent unwrap without distortions, even some parts of the unwrapping doesn’t have the same proportions of the model. And some square parts get rounded (even if I eliminate the subsurf modifier, what I did in order to test). If you do a "project from view it works perfectly but that’s not the goal here…

Yesterday I happily discovered a tutorial in blender cookie with just the same subject but it didn’t help, I have a double headed axe with some holes while the tutorial one is a “normal” one headed axe. I learned about the shrink wrap modifier, though.

So, long story short, I came here , out of “desperation” to see if any good samaritan can take a look at the blend and (if it’s not much asking) mark the seams to a correct unwrapping, just so I cant “study” them and learn how it works. It’s a fairly simple model, it just has some “extra” edge loops to maintain things a bit more sharp with the subsurf. I must say though that in order to do tests I marked some edges as sharp in the head of the axe to do tests (but I disabled the viewing of that in order to see the seams) so it’s probably a good idea to select all in edit mode and “clear sharp”. Just in case someone has something strange happening and doesn’t know why. 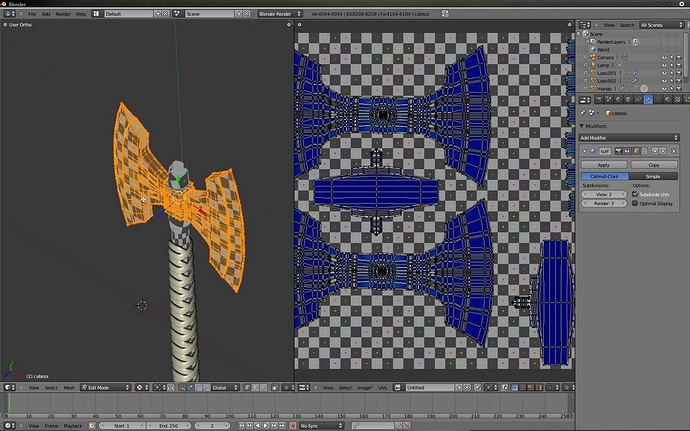 I didn’t do much to it,I just put the seams where the distortion started/ended and tried to make the boxes generally the same size.

Thank you AMDBCG :). That’s better than before.

Though I’m still under the impression that there’s something wrong (not with your seams placement but, perhaps, with my modeling or…). While seeing that videotut on blendercookie, I saw that the UV layout turned out pretty equilibrated (the upper part of the axe’s head, for example) while in my mesh it is totally wrong sizewise. Better not to talk about that square decorated part in the center of the head, or the handle of the axe…

Perhaps is that I’m expecting miracles from the UV’s?. I didn’t expect a simple model like this to be so difficult to unwrap… or is it that you have to avoid some things while modeling if you plan to Uvtexture it?..

Anyway AMDBCG, thanks for that

Though I’m still under the impression that there’s something wrong (not with your seams placement but, perhaps, with my modeling or…). While seeing that videotut on blendercookie, I saw that the UV layout turned out pretty equilibrated (the upper part of the axe’s head, for example) while in my mesh it is totally wrong sizewise.

Apply (Ctl-A) your object-level scaling and rotation to the mesh, then unwrap again.

Apply (Ctl-A) your object-level scaling and rotation to the mesh, then unwrap again.

Can I say I love you?

That was the problem, sometimes we forgot about that little things, but that little things sometimes cause big problems. The thing is after modeling it but before unwrapping it I rotated and moved all the axe to place it for camera render and I totally forgot about apply the changes to the mesh. Whats worse… I’ve never ever had thought of that being the problem. So thank you for pointing me in the right direction.

Here you have a screenshot of the result if interested. It has a very little rotation distortion in the sides (probably for not “refining” the applied scale/rotation/location) but for mi purposes it’s ok as it is. One thing’s for sure, I’ve learned something useful and important so my next model shouldn’t have, at least, this problem :yes: 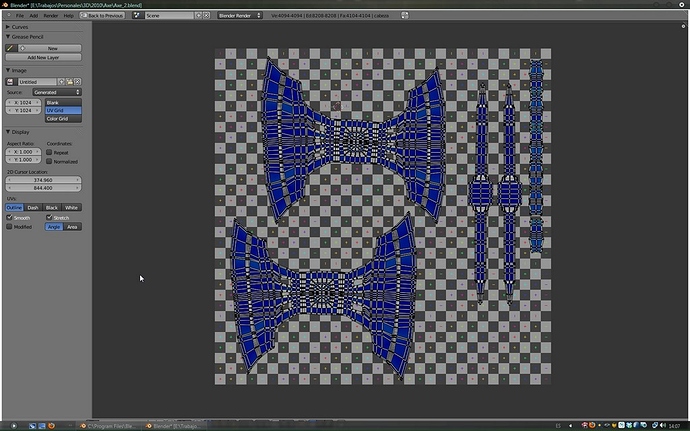