I am doing arch-viz animations. The usual setup is that camera moves into a room, looks around (with narration) and moves to another rooms etc. A five minute render can take weeks to render!

I’ve tried just about every technique (baking textures, etc) to cut down render times. Some help but are just too much work & unreliable or slow.

The technique appears to be making every room into a hdr background. So when the camera is in a room it is actually an empty blender scene with nothing exept a full 360 degree hdr background rendered previously.
Now the render times a ridiculously short (1 sec at most) and thus I can look around with static tripod-set camera as much I want. I does not matter how much stuff is in the room/area.

In above setup the only lengthy render times are when camera is moving to another room (and I am rendering a regular scene) but that I can manage.

Unfortunately the hrd images need to be huge. If my typical camera is 1024x768 for a sharp looking hdr that encompasses the whole room must be 10,000x10,000 pixels or higher. Currently my computers choke lower than that resolution.

My question is that how much memory should my computer have or are there workaround (baking is too way much work, I’ve tried that). And has anyone with lot’s of memory managed to render that hi-rez images.

JoAverage I think I have reread your post 3 times attempting to understand it. Then I realized my interiors in a ongoing project don’t have any windows. Well one but it is 9:00 P.M. Wouldn’t it be less expensive to light the rooms with area lights. And, now you have the portal feature. I can make a comment about baking through. Unless you have the graphics card from Hell baking is going to become your best friend for anything without a glossy component. Baking in Cycles must have been created with animation in mind.

The reason I’m the only one who has posted is probably because you haven’t included any screen shots nor a blend file. That is usually enough to have people passing right over a request for help.

If you need quick render times I’d take a look at Unreal or Unity. Is either that or using a render farm.

But on a single home pc, with CPU or a medium GPU, is not going to be fast enough. Or even possible.

Also: it frankly greatly surprises me that your technical requirements have to be that severe. It seems to me that you might be generating “gigabytes of data” just so that … … 90% or more of it is thrown away to actually generate the frames that the user eventually sees. (After all, “at the end of the day, the output is a series of raster-bitmaps, precisely screen-sized …”)

Furthermore, I observe that you might well be generating vast amounts of data that the camera never sees, simply because it never points in that direction! The directors of all those dreadful “spaghetti Westerns” were ruthlessly economical in their set-building: they didn’t build one measly foot of “set” if it wasn’t going to be on-camera. Therefore, ex minimis, you need to carefully work-out precisely where the camera will be, and precisely what it will and will not see … no matter how “impromptu” its movements might appear to be … and then arrange to render absolutely no more than this.

In other words: “360 degrees?!” Absolutely not!!" By the time your rendering is finished, the actual building might have been constructed and occupied …

But also, ponder whether, in the quest for image-quality, you might be actually doing (far?) too much work. “Cheating a shot,” as they call it, is actually a critical and honorable concern.

Indeed, take a look at Blender Gurus youtube videos on rendering interiors, there is only exactly the amount of geometry needed to sell the final render. Unless you are doing a full on ‘walk through’ showing every aspect of the room / building, then cheat as much as possible.
Likewise, if an item is “back of shot” don’t waste time and CPU cycles setting up super detailed work on it. How big will each item end up in the final view the user sees on an average monitor? If the whole image is no more than 2K in size, then small details may not even be 100 pixels in size, so trim the fat accordingly.

I’ll attempt to actually answer your question, because I think this can be a time saving technique.

First, determine if it is worth it for the time you will save. if you are doing a long slow pan across the room >200 frames, then this technique is probably worth it. If the camera only does a quick turn, then I wouldn’t worry about it. Remember that machine time is cheaper than human time. Also, as mentioned above, if it isn’t seen you don’t need to render it. Adjust the min/max lat/lon properties of the camera and crop tight to what you are seeing in the final animation. if it is a full 360 look around the room, with floor and ceiling, not much you can do there.

Next, if you are still having problems getting it to render, diagnose the source. Are you using GPU? What are your tile sizes? Are you running out of ram, or is it a different sort of crash?

Finally to solve the problem if it is indeed too little ram, render it in sections and stitch those together. You can use the border render option if you go into the datablock editor and gain access to the precise percentages, or you can tweak the lat/lon settings of the camera.

JowAverage, what is in those rooms of yours anyway. Here is one frame from a project using a GT 530 card 2GB 96 CUDA Cores. Here the camera is at the end of a sweep using motion blur. Walls, ceiling and beams have been baked.

Now of course when your camera stops / hesitates you can simply render a still and duplicate that in the video editor for the required time. And, those frames will be much better quality then when your camera is moving where you have to make concessions for your equipment. If memory serves me these frames took about six minutes to render. And, yes we are talking days for a shot to render out. There is no getting around that if you are interested in animation using Cycles. Or, maybe your story could be told using Blender Internal. 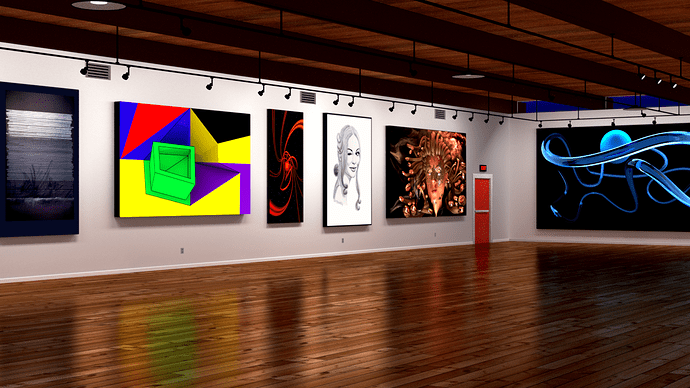 Unfortunately the hrd images need to be huge. If my typical camera is 1024x768 for a sharp looking hdr that encompasses the whole room must be 10,000x10,000 pixels or higher. Currently my computers choke lower than that resolution.

Why do you need the image to be hdr? (Are you using some post effects for blooms and glares?)
I think if you use a jpeg image, you can reduce your memory requirements a lot!

Why do you need the image to be hdr? (Are you using some post effects for blooms and glares?)
I think if you use a jpeg image, you can reduce your memory requirements a lot!

My original question was that I need to have the rooms “prerendered”. And yes I have tried baking. It takes too much time and effort and imho takes up even more memory.

So back to my original question: how much memory do I need to create an hdr or 10,000 pixels? Has anyone done it and could tell more.

Have you actually seen this technique anywhere. Maybe a YouTube link. The closest thing to what I think you are saying is a back plate method of animation favored by ‘harleynut’ on the forum here. But, he makes no attempt to stitch shots together on a cylinder for panning.

So I take it a panning shot takes to much time using the conventional method. And, there must be a ‘prerendered’ method to just get around that. When you find it please start a new thread under ‘Latest News’.