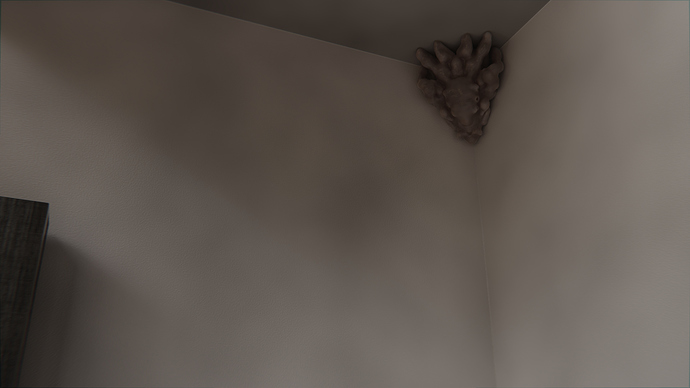 For my recent short film I needed to create a visual effects shot of a creature hiding in the corner of the room; The shot took two days to perfect, as I needed it to look as realistic as possible but also to match the live action set. Rather than compositing the creature into the shot, I decided to recreate the walls and ceiling of the room and make it an entirely CG shot, which was a bit more flexible and allowed me to cheat with the lighting and positioning as long as it looked reasonably consistent.
The digital set was made out of the three visible walls and a large gap as the window with a white plain blocking light from the highest parts of the ceiling; I wanted to have the creature under-lit to preserve the mystery. There was also a basic texture wardrobe prop to appear slightly at the edge of the frame and cast a shadow across the wall. The rest of the textures were procedural. I used basic noise to imitate the bumps on the wall, which was plain and free from any significant marks, and a combination of noise layers combined with the cavity map for the creature, which also had heavy subsurface scattering.
When it came to animating the creature, I decided to keep it very simple and extremely subtle. The thing hardly moves and is slightly mechanical, behaving more like a traditional puppet effect for maximum tangibility. Personally I think that creature animation seems to shy away from the stillness and careful movements that I have seen in real animals. I’d rather it didn’t look like I was trying too hard to make it look alive.