How about a nice cup of Joe?

But it seems to lack shadows. The cups seems to be big, but I don’t know that for sure.

The “table” seems to big. You could shorten it a little. So it doesnt look like an endless plain.

Overall the scene lacks some action. Looks kinda boring imho. Add something that will catch the eye. 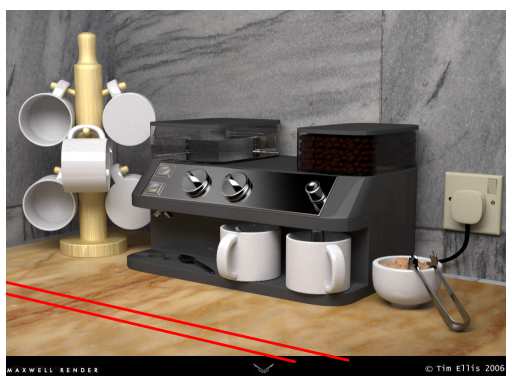 I tend to agree that there is a lack of shadows which really throws this off.

The tongs are going through the lip of the cup as well. You should fix that.

The rest looks good though.

I agree with what’s been said already.

The beans look a little to orderly, almost like they have been purposley stacked.

Other than that, I really like it. A coffee pot has been on my list of thinga to model for some time…soon perhaps.

Thankyou for the feedback.

There are plenty of shadows, but I think due to my lighting set up for this render, they are only noticeable beneath the sugar bowl and in the corner behind the mug tree.

The mugs are the correct size, the coffee machine it’self is too low in height. This is something I had planned to change but forgot before this render was done.

I had intended to shelve this one, hence posting in the finished projects, but perhap I can go back to it if there’s time.

Will raise the sugar tongs slightly too and increase the randomness in the beans.

Many thanks for the feedback.