How can I have my character swing an object with BOTH hands?

I tried by applying plain axis to the gun, IK to his left hand to follow it.
In this file, those are canceled because it didn’t work well.
He has four bones in his arm because he is a robot…

Have your gun be the controller instead of your hand ik’s. So the gun has a rig that will have the handIK’s be parented to it. Thus only needing to polish elbows and gun motion. Of course adding the second hand for a cocking and reloading animation.

Also I think that your hand ik’s seem to be not be independent. It might be better if you have the hand ik’s in the same location and rotation as as the hand. With that you can use the copy rotations for the hand bone. You can set a copy rotation to the hand bone after the hand ik is in the same rotation and location as the hand. Be sure to have the hand IK’s set to a bone like the root or a body bone after the change. I might give a sample if I have time.

I modified your rig a bit. You can even modify this more like parenting gun_control bone to the added torso bone. Though it might need secondary animation down the line. Something that you may need that is called socket bones. This socket bone system could allow you to parent the gun to a chest or abdomen bone using a slider. If you use a bone parent then it would be harder to animate.

Thank you very much I was amazed when I first saw your correction!
I didn’t expect that someone would help me so much like that.

In your blend file, wow the both hands follow the gun.
According to your comment, it seems rolls of bones were not correct.

I’m a beginner, so I have a lot of problems with understanding your correction and words.
I’m going to compare my old file to the file you corrected to understand what is wrong in my settings!

I was wrong, rolls have not been changed.
I noticed that you moved positions of knee bones from front to back.
Also, the IK bones are covering some of arm bones.

Are there several ways to set bones to a character?
I’ve learned rigging from https://www.youtube.com/watch?v=cGvalWG8HBU and other tutorials look similar. So, I thought this was the basic way.

I’m sorry for being rude, but If it’s ok, could you tell me where you learned it? or any good tutorial videos to study it?

No prob, I really do like to help people and the task was pretty simple to me ;). This might get long but hopefully it does help. The one video can be great somewhat but no control for the foot rotations so you need to counter animate by polishing the ik and foot at the same time. With the constraint that makes the hand following the handIK rotations then you don’t have to think about polishing the hand rotations. Though it can be fast for quick posing for a still shot.

Alright first lets take out your bone colors by going to your Display under the Armature Object Data. It will allow you to see your bones that has constraints. 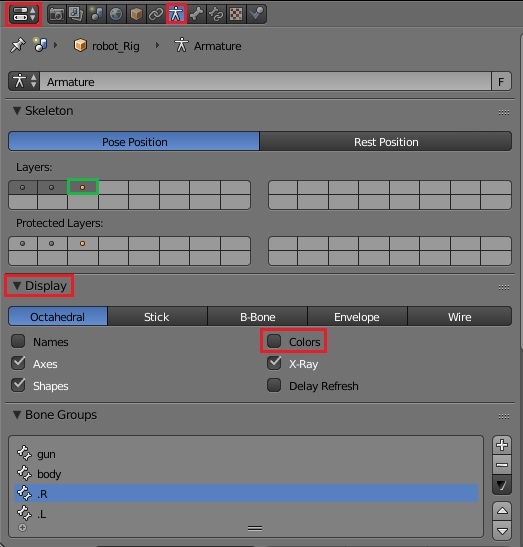 Green box is the third layer that has the gun rig. Just giving a side note where it is.

I changed the elbow bones to the back and changed both knee and elbow bone rotation’s. Currently the knee and elbow bones you had were pointing up. Most of upward movement will be in the Z instead of Y. So changing the rotations will allow you an easier time animating and polishing. I changed the locations of the elbow poles because it is where they are pointing to. Think of it as you are almost picking up the elbow and placing it in that spot.Wrists and hand rotations follow handIK rotations. If you select the wrist.(x) or hand.(x) you will see your constraint. Now if you rotate the hand IK, both hand and wrist will follow. These IK’s are constrained on to bones inside the gun. Might be hard to see so you might need to put some shapes in them. One is trigger and the other is shaft. The shaft bone can be animated so you can cock the gun for a reload in the animation. Torso bone was added so the movement for the body will be easier to locate in the animation but know where the body is. Your control bone that is down underneath the character is usually called the root or rootbone. Its better to keep this “root”/“rootbone” not keyed into the animation.

Root bone Game wise: The root is the origin point to the character. So all actions as jumping or falling is stemmed from the root bone. You have a jumping animation where your character is similarly all originated close to the hips without animation to the root. Once imported to a game engine the root will be animated by script in the three of X, Y, and Z. If the root is animated it can cause the scripter, the one that develops movement in the game engine, a hard time.

Root bone Production wise: Almost like the game but a little different. I usually leave the root and just animate the rest of the bones forward. Though some animate cycles or cyclic animations to put onto paths. Cyclic animations is like a walk cycle. It repeats the last of the animation to make it into a cycle. Sometimes putting a path on animations for characters really doesn’t look good. It takes more time just to get the path to act right. Don’t get me wrong though. Paths can work for other animations and setups.

I’ve been an animator/rigger for a few of indie games past two years on Indiedb.com so some experience is from those games. A lot of the help comes from tutorials and lessons I found. I picked up DVD training 8: Humane rigging by Nathan Vegdahl in the blender store. It has been helping greatly in these past few months and still valid for v2.7+. Animation wise I would consider going to CGcookie.com/blender for Beorn Leonard’s tutorials. A couple of months ago I checked out Beorn’s animation fundementals in the cgcookie.com/blender and helped GREATLY. Now knowing the fundamentals I can look at most animation tutorials on other software to help even more. Those lessons are not for free but pretty cheap comparing what you could have needed for an animation school. Not saying that an animation school shouldn’t be needed. It can help even more than just tutorials and a few lessons.

The sites or youtube channels I usually go for animation and rigging tutorials and experiences are: 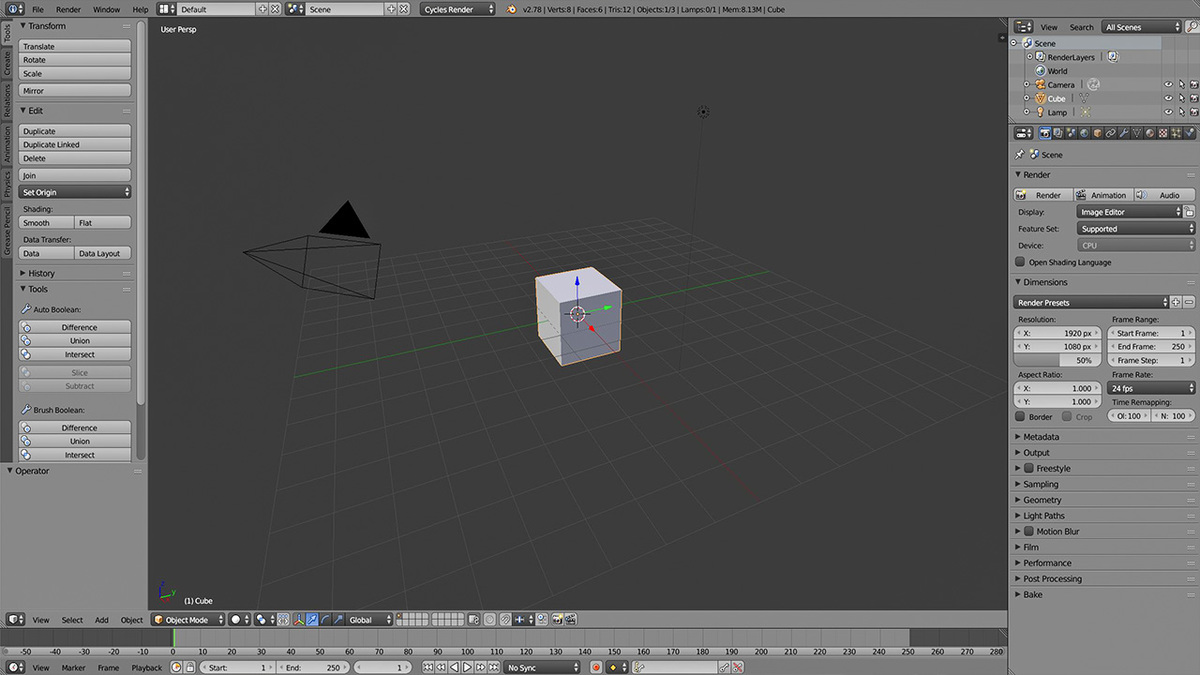 CG spectrum has awesome animation tutorials though in maya. Once you get the hang of animation in
blender then you can look at practically any animation software and learn from it. Now rigging can be a
different story. Constraints can behave differently between software.

Thank you for your amazing explanation and recommendations! Also, I’m so sorry for being late to reply, I was very busy

I think I almost understand your explanation. It’s very detailed and enough plain for me a beginner.
However, when I tried to imitate your rigging on my original file, I couldn’t do it. I think I have a lot to learn something other than rigging to imitate your work. So please don’t care about it. I’m going to take more time and learn. I will look at DVD training 8: Humane rigging as you suggest.

And… wow, I’m honored that I’m taught by a professional animator! I hear that game making is a tough job. Please take good care of yourself. I will keep working so that I can post on 11secondclub.com!