how do I align an array to a bezier curve without distortion?

I made a curve/circle which I think is a bezier circle, not a nurbs circle, and after a while was able to extrude some parts of it to line up to the wheels for a tank. But the distances are distorted between each piece of my track, and each segment of my array is squished or stretched seemingly at random, and while it follows the shape of the curve, it doesn’t follow the scale, but is actually about twice as wide and tall - probably a problem with applying scale transformations, but that doesn’t explain why pieces of my track are getting distorted randomly around the curve.

I had wanted to align it as best as I could and then shrink or stretch the length of my segments along an x axis to form the final link, rather than have the various pieces distorted, which would also distort the circles of bolts into ovals.

Without this, you can be sure to get all kinds of posts that don’t really help much.

I think at this point I would have rather had all kinds of posts that don’t really help much, instead of no posts which help not at all. I have identified the problem. The segments of my curve are not evenly distributed. If I knew how to evenly distribute my segments, then my array pieces would not be distorted in proportion to each other.

Alternatively, if there was a way to retain the proportion of each “count” of my array so that each piece of the track was identical in size rather than warping to conform to the spacing of the segments of the curve, then the problem would also be solved.

Otherwise I am going to have to make 90 individual objects to act as the pieces of my tank track, and will not be able to animate them at all.

It takes only a few seconds to press Ctrl F3 to get a screenshot and upload it to illustrate your problem. I am just trying to help you understand what is necessary to get the most out of this forum.

Here’s a screen shot of track rig that uses that central cube as a stand-in for a tank or crawler body. Moving the cube forward and back or rotating is around the Z axis drives the track. 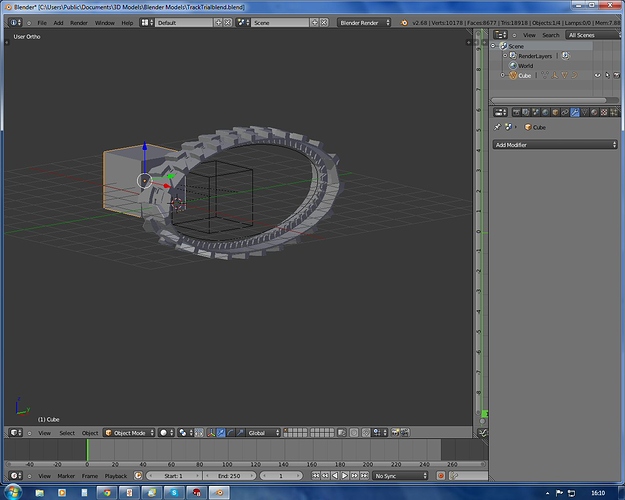 This model is based on the original by Norvman.

I hope this helps.