How do you determine what scale to use when setting up a scene?

I have a scene which will involve a house and a person. My computer isn’t the fastest machine in the world so I’ll probably model them in separate files and then import one into the other for animation. I notice that the Blender grid “floor” seems to be a fixed size, so if I want there to be a rather wide shot involving the field around the house and so on, do I just scale down the model or is there something that I can do in Blender’s environment settings to accommodate a “normal” sized model (whatever that may be).

I know that everything in Blender is relative and that all measurements are simply converted to “Blender Units”. The issue, though, is that with some bigger models, I’ve noticed that they go beyond the bounds of the space rendered and just disappear.

In short, just wondering how to get a person into a wide shot on a large landscape. Or anything in a super-wide shot, for that matter.

You can set units in Scene settings 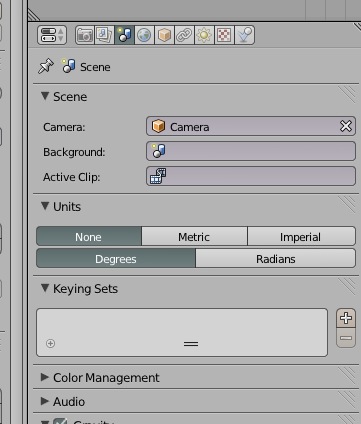 The issue, though, is that with some bigger models, I’ve noticed that they go beyond the bounds of the space rendered and just disappear.
The 3d view (in properties panel, shortcut N) and the camera view (in the camera properties) both have clip start and clip end distances. Set them appropriate for your scene if the defaults are not ideal

Sorry for taking so long. This is exactly what I was looking for! Thanks so much, Richard!