How do you make a muzzle flash?

i do not know how to create a muzzle flash.

I have a halo effect and then i do not know what to do.

i cannot make the halo disappear, then reappear.

Hi, In my Thompson 1921 animation, I used a “shutter” made of a simple black shadeless plane moved in front of the camera. The muzzle flash itself is a flow of particles with halo. The submachine gun an the muzzle flashes have been rendered separately in two times, and composited.

The smoke effect at the ejection window is also added by compositing, using Particle Illusion and an animated mask.

That is a great vid! Please explain why you used the plane “shutter”?

I also liked the effect of the ejected shells too.

Please explain why you used the plane “shutter”?

As the muzzle flash is only visible one frame for each shot round, it is not possible (or at least not easy) to get a good flame shape (with variations from a flame to the the other one) without using a continuous flow of particles.

So, as we want to show the flame only during the firing, I have choosen to use a “shutter” to mask the flame between the shots.

It is a simple shadeless black plane. You can change its layer with an Ipo to show or mask it, or move it Up and Down, or rotate it at 90° for each frame, with an Ipo set to constant, to avoid interpolation between the open and the shut position.

I hope that my explanation makes sense… !o)

The ejected shells are made with an other particle system, using a shell as particle object, with some random in the rotation of particles, and a vector blur node in the compositor.

You can also try my muzzle flash kit. It is mainly for front and side views. Pre animated image sequences.

Texture: Muzzle Flash Kit - This is a set of animated muzzle flashes that you can use for side and front views. 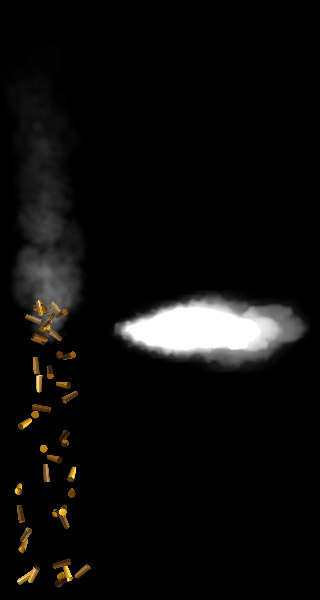 I think you can make a keyed particle system to emit very fast particles every other frame that only have a lifetime of one frame.

Nice model, Phillipe! Did you choose not to put a compensator on the end of the barrel? It was one of the Tommie’s better features once they figured out how to do it, really increased the accuracy by reducing muzzle lift due to recoil. It also made the bi-directional muzzle flash very characteristic.

Did you choose not to put a compensator on the end of the barrel?

@ chipmasque : The Cutt’s compensator has been added on the 1928 model. My animations shows the 1921 model. The stock of the 1928 model was also a bit different (screws on the sides). On my website you will find several versions of the Thompson. A small detail is missing on the pictures : a part of the extractor should be visible, but I hadn’t accurate reference images of the breech when I rendered the images.
http://3d-synthesis.com/32-Thompson1921-1928.html

I think you can make a keyed particle system to emit very fast particles every other frame that only have a lifetime of one frame.

@jergling :I’m not sure to understand well, but for what I have experimented, Particles with a lifetime of one frame appear as single points, not a cloud. This said, I don’t master keyed particles, so an exemple would be helpful.

The Cutt’s compensator has been added on the 1928 model. My animations shows the 1921 model. …

Cool. I don’t know the models well enough to tell the year at a glance, though I know the compensator was a later option, first seen in '25 or '26 I think.

I googled “muzzle flash” just for the heckuvit and man, there’s a lot of pics of guns gone wild! Seems to be a pop’lar subject :eyebrowlift2: