How do you work in imperial units (feet & inches) in Blender?

I work mostly in metric, but every once in a while, I have project that I need to work in imperial units. I am quite accustomed to working in feet and inches in programs like autocad, rhino, and sketchup, where the input in the program is universal - i type in feet or inches in all places - defining geometry, moving, modifying geomtery, etc.

When I used to work in imperial exclusively in 2.49 & 2.5x, I used the default blender units, where 1 unit is 1 foot, and modified the grid to a subdivision of 12. The issue is that when importing geometry from other programs, it would never come in with the right scale.

Now, I am experiemnting with Blender’s unit settings, trying both feet and inches as the default units, but when i input numbers when moving objects, it’s doing something odd that I suspect has to do with the conversion scales m to ft or m to in, that it assigns when changing the units. It works well with importing geometry from other programs, but that’s about it. But why does everything need to be centered around an absolute 1m unit and scale in relationship to it? So, I am defaulting to the way I am accustomed to working with imperial units in Blender, but at the same time I am wondering how are other people working in it?

(PS: I sure hope there is someone on the 2.8 development team that has worked extensively on projects in feet and inches that can help to implement a units system and input that works as seamlessly as in other programs)

I recorded some videos on this very thing in my playlist.

Very useful videos. Thank you. I usually work between Rhino and Blender, and on looking through the obj that rhino exports when working in inches, one unit is one inch, which makes sense. Not sure why Blender’s OBJ importer hasn’t implemented a scale option like fbx or 3ds importers.

The odd thing is that imperial units do not seem to be linked 1 to 1 to the underlaying blender units. They are always in relationship to a meter, which makes play with other files a bit more difficult.

here is a short video of my test

Looks like Rhino is maybe 100 X (or more) than Blender. It is usual for the object to come in at what ever difference there is between programs. Maya objects (sized to real world units) will always come in at 100X what you expect because Maya’s default unit is 1 CM, which is .01 of what Blender is. I read that Rhino uses millimeters by default.

This video explains it:

(note there is an error in this video Unity is 100x)

In this situation, I would have to have access to rhino, which I don’t. But I am going to guess that the first thing to do is to discover what the scale is between Blender and Rhino. Then scale down by 10, 100 or even 1000 (if it is i millimeter in Rhino) and then when you switch to imperial make sure and set the scale back to 1 in Blender to get the proper display and reading on the size of the object. From there you can continue to edit the object in imperial units.

Perhaps Rhino (and maybe other CAD packages) uses the absolute unit of the current document’s settings, at least when exporting an OBJ, which sounds different than other 3d packages.

The only issue is, in blender feet and inches seem to be hardwired as a relation to meters as you say. Instead whatever the unit that is currently set should equal one blender unit which may make the transition process more seamless.

For now, I will keep working with default blender units, and customising the blender grid to base 12 instead of 10.

Anyways, I suppose it’s good to have something absolute anywhere (1m) but is it me or is Blender’s implementation of imperial units input awful? 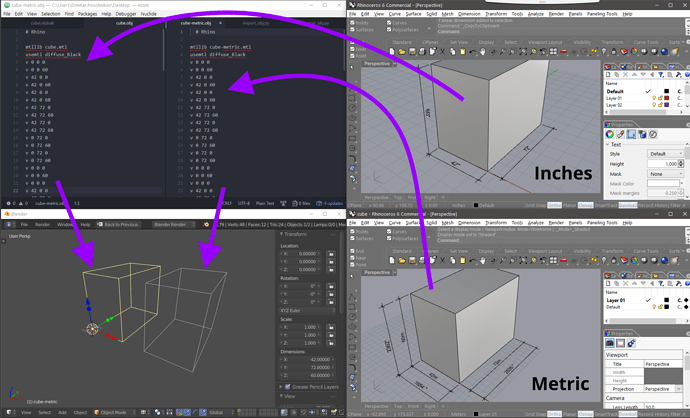 Actually I don’t think Rhino is different. And actually rhino’s internal Unit is 1 meter just as it is in Blender. Not mm, as I had supposed. Millimeters is the default display unit. And the Default display Model Unit. But the units in Rhino are Meters just like Blender.

From what I can tell- and forgive me I have spend only a number of minutes in Rhino - it does not care what you set the display Layout unit to. Just like in Blender. The model does not change scale. But if you change the model unit, it will try and adjust the size of the model to inches from whatever Layout Display you had. And it asks yo if you want to do this.

To test this open a preset blank document in any of the measurement presets, feet inches, millimeter etc. Does not matter. Create a 1 Unit Cube and export to Blender. In Blender it will be 1x1x1 which is a 1 meter cube.

If you create that cube while the model units are 1 Meter, then if you change the model units to inches it will ask you if you want to change the scale of the model. From what I can tell, this will then turn that 1 Meter Cube into an inch cube. You can then export this to obj and import in Blender and then set your display units to Inch and Imperial and then make sure the scale is set to 1 and it will properly display as 1 inch.

And so here is the tricky part. If you start out with a clean document and set your model units to 1 Inch it will export as one meter.

This is what I can tell so far. So my guess is that if you are modeling in Rhino with model set to inches you are actually not modeling in Inches. You are modeling in Meters. I unit making one meter. Which would explain why it won’t make any sense at all in Blender when you try and set it to Inches.

In Blender, as I mentioned in my video, you don’t want to set the scale to anything but 1.

If you want your model to read as inches, scale it by .0254, either in Rhino or in Blender. Then from there your input fields will all be correct to real world measurements.

Obviously I am not a Rhino expert but this is what my experiments using the grid and measuring tool seem to show.

Well, the best answer, which I haven’t seen yet, is. Don’t. Don’t do that. Use SI measurements across the board and your work will be guaranteed to be compatible across the board. Use Trump units at your own peril.