How to change camera focus in animation.

Right now I have my camera following a path. And lets say I want to have the camera turn and focus on an object at frames 100 - 150. Then right after that, unfocus on said object and continue along the path.
I can’t seem to get it to work, because I don’t know how to add a keyframe to change focus on the camera. And as soon as I add a damped track modifier the camera just focuses on that object throught the animation.

Check this out: https://www.youtube.com/watch?v=wPlFrmS4z1g
EDIT: Richard beat me to it, but whatever.

Do you mean the Depth of Field?

add an empty as your DOF object, then select it in the camera “depth of field” properties. (FOCUS property) 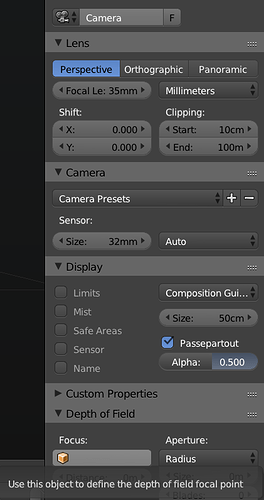 adjust the parameters for more or less DOF. If you like, simply move this empty to control the focus point.

You sir, are awesome!

Ah-ha. Okay, so you were talking about pointing the camera at a particular thing rather than having one thing in focus and another out of focus… blurry. right?

Ah-ha. Okay, so you were talking about pointing the camera at a particular thing rather than having one thing in focus and another out of focus… blurry. right?

Yep!
But now I know how to do depth of field too.

Typically, and I’m not saying it’s the best way to do it, I will use one consistent object as my “focus birdie,” and if necessary animate that. I set marker-tracks on the timeline for everything, and usually convert each individual move into an action for the NLA editor so that I can more-easily adjust it.

Many things, including focus changes (if not actually pulls) can be “faked” in the editing process: if there’s any “cut,” however small, that’s an opportunity to change focus.

Incidentally, if you carefully observe the techniques used in any movie or TV-show you watch, you’ll see those “imperceptible cuts” showing up all over. It tightens-up the action just a little bit, but it’s an important little-bit. Moments when the camera truly isn’t focused on anything-at-all are generally kept to a minimum. Start the motion as the shot starts to blur, #CUT TO# the motion finishes as the blur is removed. Presto. But, it’s two shots (and a simple “blur” filter); tighter, and adjustable.

Studying cinematography and film-editing is a very eye-opening experience. I strongly suggest that you shoot OpenGL Preview “film” first (with “stamp” turned-on), then edit it down to as close to a final-cut as you can get it, then fine-animate only what is left. Just as the Eraser is the most important tool in writing, Cutting is important in film and much of it (if done well) entirely escapes your attention because it helps to focus your attention.