How to configure multiple PC's on a network to use GPUs and CPUs?

Hi, I am uncertain how to setup all of my Blender machines to network render with different compute methods (CPU/GPU) and tile sizes?

Due to not being able to see the output of the current frame that the slave is working on I am unable to determine if setting the compute method and tile size differently on each machine is having an effect.

This is my configuration: 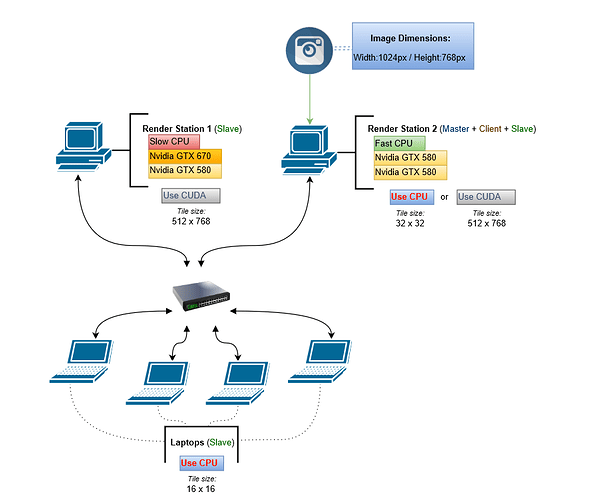 Ok first up Cycles does not have any inbuilt network rendering capabilities… people HAVE started working on it but its not there yet.

The User Prefs are managed on a blender scale not a blendfile scale… as in you change blend files but your blender settings stay the same… this includes enabling compute devices.

However, switching between CPU and GPU… is also a scene setting… which means that switching to that is also on the scene scale.

Pretty much the best way forward is to write a script that is run on load of blend file, to detect what is / isnt available and to change the scene settings / tile settings / user settings based off it.

If i had so many machines i would keep it simple, create a share on your “master” containing the blend file.
Have client side scripts that take the blend, then let the client check if a simple number file is available like 1.txt
Another client would check for next available number (or missing numbers) 2.txt so you know what frame to render.
If you know a little of perl web scripting, you could also write a page that upon requests increases a number, so the client would know what frame to render. (and you might consider a batches of frames like first 10 or so)

Tere note the P option to run a script inside your blend file, to set futher set blender specific settings.

I don’t know any magic script but there was a youtube tutorial on how to use a shared drive folder and in the render settings use placeholder and disable overwrites. Then create an instance of blender on every machine you use.

That way it jumps over every placeholder a machine is using and renders the next image in line.

That way you can use both cpu and gpu on the same machine, and the other machines will also render to the same folder but won’t overwrite the ongoing renders.