How to detect a faked photo?

Hello. I am wondering one photo from the news of Finland that is in the net.

The straight url to the article where the photo is here:

and here is the straight link to the photo:

I dont know why, but it seems to me that the girl in the left is added to the photo with the photoshop.

Can you prove it some how that its manipulated or real?

Levels looks not manipulated to me but in the HS there is professional photographers and photoshop users who would make the fake looking so real if they want to.

Okay, or i am just insane…

I don’t speak finnish but the article appears to be about subway fares. If that is corrent, the question arises, why would they add her into the photo. There is also what appears to be her reflection on the side of the carriage that would again cast a doubt as to why they would add her.

They would add her to the photo because here in finland we have some problem about the immigration. And hs is really famous newspaper that tries to make only good news about the somalis.

Few days ago we had here a raping where 4 men raped a girl and it wasnt in the news because 2 of them were refugees. But then everyone who did know about the thing started to spam it in the net and everywhere and then - and only then the news publised something about that.

Please dont understand me wrong. I am not a racist. i dont have anything against the refugees. But i dont like the ways that hs uses for trying to show their views.

I can tell from some of the pixels. 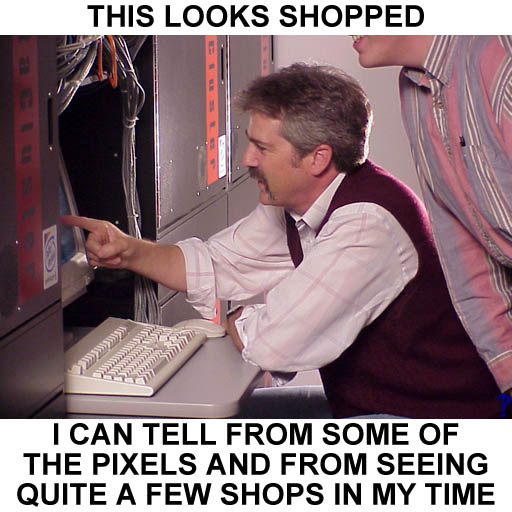 It looks weird because its high saturation and looks like a good dose of ‘sharpening’ and the fact that she appears to not notice her surroundings and her surroundings appear not to notice her. Everybody else in the subway car are standing there like they’re standing in a subway car, looking casual, looking down a bit. Also the person on the right looks as though she is about to enter a subway car. Yet the girl is looking at a completely different thing.
But if I hold my hand over the red part left, she blends in better. I think it’s just that the red side shows too little depth and thus she doesn’t appear to really be in front of it. And the lighting also doesn’t give any clues.
So I’d guess, probably real, but touched up in PS, I would say too much saturation, too much sharpness.

I’m no expert by any means. I would say that the photo is real. But I would also say that the photo is staged. I think the girl was there at the photographers request. Maybe a model or something. The little boy appears to be looking directly at the photographer. The girl(model) looks as if she is afraid of something. But if you look at the occupants of the rail car you notice that it is full of older people. These people do not appear to be looking at the girl and she has no reason to be scared. The photographer is standing in the perfect spot to capture the picture. As if he was expecting this girl to appear from the rail car. So even though it appears to be a real photo it could still be a manipulated scene to enhance the story the paper is trying to tell.

I have no clue what the story is because I can’t even begin to read that language. WOW. Those words are all so huge and hard to spell. That is one of the most complicated languages I have ever seen.

I first thought this thread title was " How to detect a baked potato?" Sometimes I read to fast I guess.

I can translate the text with the photo:

HKL moves to the staired prices of the ticets. Arja Masalin and her grand children Henri Thauvon (center) will stand up from the metro at the trainstation of the Helsinki

The whole article tells about the prices of the metro tickets and Arja and Henri just were in the metro when the photographer went in for taking the photos.

So we have a question why dont we have in that text the name of that girl in the left and the old woman in the right side because they looks like to be more in the photo than Arja Masalin and her grand children Henri Thauvon.

Maybe the photographer just founded that girl from the metro and asked her to pose like that in the photograph? But then he had better change to ask her name and it didnt happen as we can see their names is not there…

One reason why the girl would look scared is if she is muslim. The muslim girls shall not be in the pictures because of their religion and now his man maybe have very good reason to hit her… or something… :s

" How to detect a baked potato?"

the photographer had to get a release for using her image, which he/she had to get right after snapping the photo, so i would say its legit since they publish her name. The car is extremely clean and shiny and vibrant, which makes it look fake, but those Finns are mighty particular so that could be real. Subways also stop in the same spot, so he should have known where to plant the tripod. You also don’t know, however, how many he took, until he “had enough” and then his editor reviewed them all and determined which one to include. So, if the editor wants to include more photos of diversity, then he/she chose … this one!

I’m no expert, but I think many times a faked photo can be caught by looking at the lighting. Things such as light:

Definitely a fake one: the colors doesn’t match (I’m not talking about skin tone, u racist guys :ba:) and the blur level is not the same. Nicely photoshopped though. 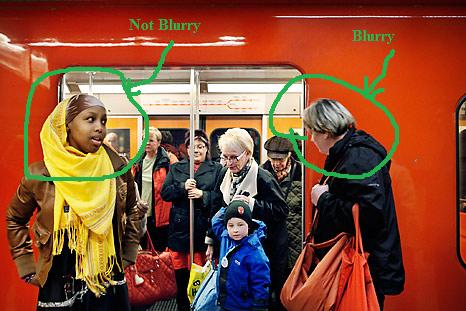 The one thing that is probably photoshopped in this image is the trademark “Heikura” vignette at the edges. This may be some other HS photog, it is a popular effect in that paper.

From the looks of it, this was taken with available light, using an (expensive) fixed focal length lens, rated between f/1.0 - f/2.0. This is an underground station, and all light is artificial. The spectral changes between lights inside the car and in the station may have been exaggerated by the digital camera ccd.

The picture has apparently been taking during the day, outside of rush hour. The persons present are those without 9to5 jobs, obviously.

If you look behind her in the highly glossy material of the train you see her reflection, which could be photoshopped, but why go to the trouble. As for the staged photo, yes indeed I agree, I think its staged.

As I cannot understand the language, I dont know the context.

ArMan re your views: I dont think you’re racist. Europe should let go of the “Guilt trip” succeptability and start taking a harder stance on the refugees still rushing it’s borders. I can’t flee to Emirates or Liberia and set up a church or synagogue there without being accosted by whoever keeps them “culturally pure”, yet in Europe freedom is widely requested and respected. Whenever Europe implements stricter regulations, the rest of the world screams racism, but when China, Saudi Arabia etc. does the same thing it’s fine. Reverse racism is still racism, and lord knows this planet at this point in time and the modern human race (All of us) need to sit down and work out how to get rid of all these “isms”, because globalisation and current travel speeds, communications will blow such extremes out of proportion. Thereby ending us before we could even go into the wide universe as a single unified race.

I don’t know if it’s shopped, but that black chick sure is hot.

I say definitely not shopped. Those Finnish like free software. So it was
definitely GIMP’ed.

I really forget that I have done this thread.

Maybe that everything is made with blender. The artist just forget to add rust textures to the wall and thats why it looks too shiny. (bad joke)

AnubisZA, I agree your comment about Europe. We really have problems because of that. I hope that we will never go here in Finland to the same situation that is in the center Europe. Especially in the France and its neightbours where is all the time some kind of fighting in the cities…

thanks for the valuable information, this thread is really helpful