How to head modeling a pre-modeled head with front and side images plane?

I’m newbie in 3d working. So I have a human model and I want to remodel the head with 2 images. I spent all day tried to search for a tutorial but there are almost all tutorials to model a head from scratch, not for such a case like this.

If there is no way guess I will model it from scratch then attach it to the body. But the original model has rig so before I go that long way and mess it up, I want to make sure if there is a way to remodel the head.

I will appreciate all your comments. 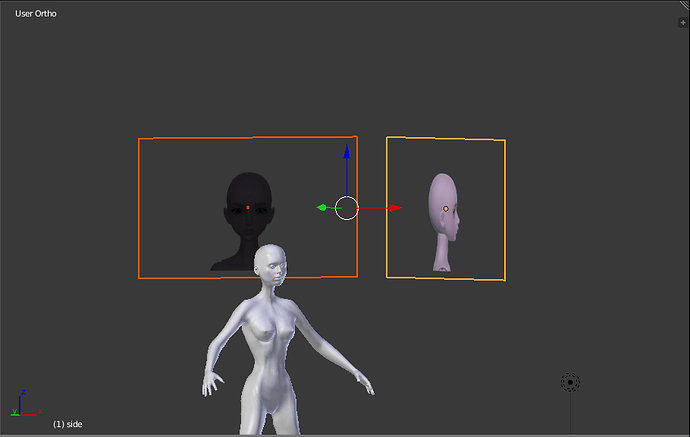 mmmhh… the reason, why you will (in my opinion) never, ever find a tutorial, which explains “your way” is, that it is nearby impossible to “redesign” a given head-face topo. Some scupting-gurus, I mean really highly expierenced ones could do something like this, but they won’t ever. Cause in reality it’s much, much easier to set up a new head from scratch.

Imagine something not-virtual Let’s take a head formed by clay. Let’s say it’s a very good work which shows Christina Aguilera. And now you want to change this one into, let’s say the face of John Claude van Damme…

Hope you get what I want to tell you.

As for a beginner, start up with the basics of modelling. get a feeling what it means to “build” a mesh. Get the rules of topology on easy meshes. And then go into learning character modelling. Again, get the rules of topology on this type of mesh and then, maybe then, you will be able to cut off the head from a given model, create your own one and “connect” it to the original body-mesh.

That’s only an advise, from someone who started some years ago with the same “dream” of getting something created like you try today. I failed and I nearby gave up. But then I started to learn from scratch and now, slowly now after some years now, I feel ready to start realyzing my initial dream.

I kinda disagree with that Mike. For me sculpting a head from scratch is one the most difficult skills to master (specially likeness). Also, I see a lot of professionals start with a generic head (to save time).

I kinda disagree with that Mike. For me sculpting a head from scratch is one the most difficult skills to master (specially likeness). Also, I see a lot of professionals start with a generic head (to save time).

Well :-), when I say “from scratch”, then I mean generic-base. At least for the majority of sculpters. But the best ones a starting from a simple primitve.

But I agree totally!! Sculpting is one of the most advanced technics in the 3D-world.

But here, especially in this threads case it would mean to “build” a topologie on a 2-sided sketch. That’s a total different approach! If there would come up something like scupting, then only in the very end at finalize distinct areas of the mesh. In principle the “other way round” as in case of first scupting. It’s like the necessary re-topo in the sculpt–> to simple mesh work-flow.

Thank you two for your comments. Well I’m the type that will spent time to find a chainsaw first, in order to take down a tree. Apologize for that laziness. I made my first step into 3d things about 2 weeks before, and found out there is actually a way to model (a human) (almost) as expected. But it seems isn’t a completed chainsaw for now so I decided to come back to the handsaw. The way to do it is:

But the output of those is way too ugly for my purpose so I put it aside and back to the basic. But I’m still “dreaming” for a day they will improve and then I will be able to… lazy. My bad lol.