How to make dynamic text in 2.57b (and where is the texture face panel)

Does anyone know how to make dynamic text in 2.57b? I have followed tutorials for a method in 2.49 but for the life of me cannot find the options (like in the texture face panel).

Can anyone show me the steps on how to make dynamic text? And although I have searched for the texture face panel (physically and searching online/forums), can someone tell me where these options are?

Weird, 2.57 its supposed to be a very logical interface…
But, maybe the function was renamed or…removed!
Who knows?!

I certainly hope not, but if its removed I hope its replaced with a more sane system. The only workaround is to append it from a 2.49 file but thats just plain stupid.

Texture face panel is in the edit-mode section, when you select ‘Blender Game’ at the top of Blender’s window. You have to have a UV-map on your object (U-key to unwrap a UV-map from the mesh, in edit-mode). 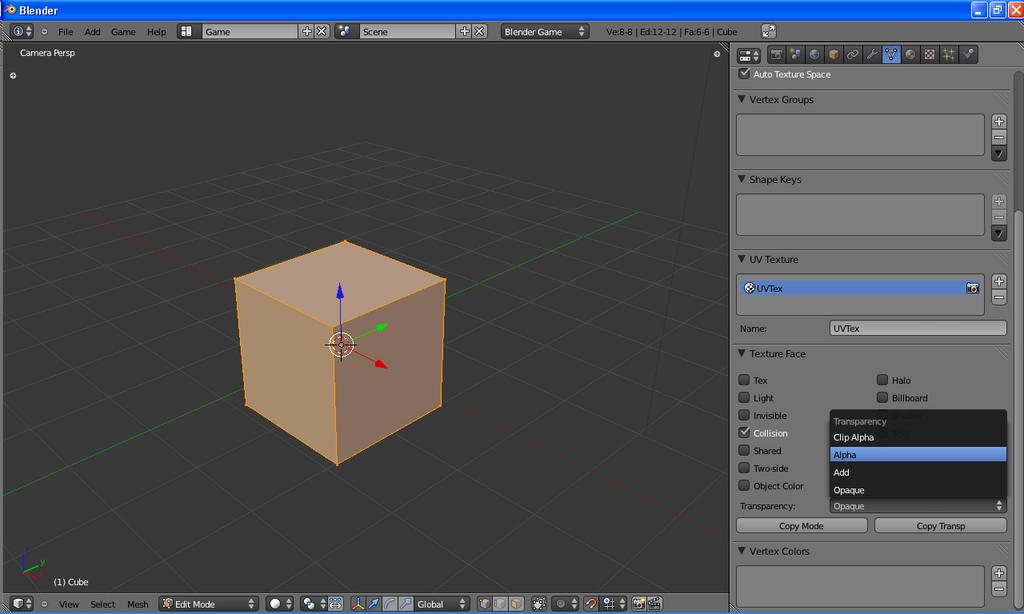 there is a new feature in 2.5 to use normal Text Objects in the Game Engine.
http://www.blendpolis.de/viewtopic.php?f=15&t=33682
It is in German, but i think you’ll get it trying the atached blend.
Much easier handling and !!!

Thanks (and I mean THANKS!!) SolarLune! I thought I would go mad before I found it in 2.57b.

And thanks sevi for the link! Very interesting indeed!

Been playing with the text, why is it that you cant change its colour? Is this a limitation of this technique?

Object color in gui works to.

LaH: Unfortunatley I cant get the colour to stick to the text: it always defaults to black.

sevi: thanks for that-one thing I forgot though was how to also change the typeface?

Many thanks to you all

Rubbernuke: Are You sure You use the object color, and not material color? It do work for me anyway. But alignment, kerning and stuff don’t seams to work - have not tried to change font.

Wow that’s so much easier

One Thing im wondering, is how to change the type of the Text (font).
If anyone find it out, please post it here.
What kind of fonts will be accepted??

Any font will be accepted, but you need to convert the font (.ttf file) into a targa image using a program - usually, ftblender works well. I didn’t know about this until recently, but apparently, you can load fonts and draw text directly using Python using the blf module. I don’t think new lines are supported, but when it’s finished, this will make things quite a bit easier.

Thanks John_tgh, I found the options you describe and it does indeed change the colour! And LaH, you were right! All these new options to play with!

Plus, I do hope the blf module results in some logic block controls too.

Edit:I translated the original post and it looks like you have to define the font at object creation (I highlighted the relevant section).

So, I know that this issue has been a small thread, but since the function of which I speak in 2:57 is working properly, I thought I’d write this little post and try to explain something …

So, (almost) everyone knows that in the GE so far had a little effort, if you wanted to have variable text. You had special font textures (which were not always easy to obtain, at least for me …) work. But more recently it is also possible with the built-in text objects to work from Blender.

Just as usual, and press Shift + A “Text” to add a text object.
any font in the Font tab and then select the desired color (IMPORTANT!) in the Material tab, but the Object tab under Display in Object-Color Set NOT!

The text can be either by type (not working paragraphs about Enter!) In edit mode of the text or object by Python code

EDIT 2: I can confirm that it works, the typeface does indeed need to be set at object creation. So problem solved and party time!