How to make own spherical mappings...

Please tell how to create your own spherical mappings with ordinary digital camera. I have heard of such a software which is free to use its called HDR shopping but the download link is dead. Please recommend some free or very cheap software to make spherical hdr environment mappings in order to use them in Blender or in hypershot

I have only ordinary lens in use. I could also buy a tripod for camera for this purpose…I think it is needed also.

Hmmm, you can turn any image into a spherical mapping with some work in most graphic programs.

I made one not to long ago, but was just going on hunches or tial and error. It was pretty easy, but I dont remember what I did now.

I tried fisheye, but didnt care for it. Also, you can fix many problems by moving the verts of your sphere around to remove distortion in the uv image editor.

Some just use sphere for the sky, then a ring of one or two rows at the base of the sphere to put the horizon of trees, buildings, whatever on. Solves the distortion problem at the base.

If that is what you are using it for.

I have understood as follows:

If I take shots from all angles of the cube I can make a spherical of them. I need all the sides of the cube and top and bottom: togeather six pictures. Then I need a software which combines all these pictures to one sphere. Like in Quicktime panorama images. I wonder if there is a software for this…

Here is one way:

How to make this with gimp?

This is pretty close what I am looking for…

Is there some other method than this? Something easier, something cooler?

I would like to make as fine spherical maps as this is…but with as little effort as possible while acheaving as high resolution as possible.

I am still looking for tool to make this from 6 images, but the more there are images the better the result. However there must be some reasonable amount for the needed pictures and this tool could melt those pictures easily.

There is such a tool as HDR shop but its not downloadable now…I wonder what you can do with Terragen? 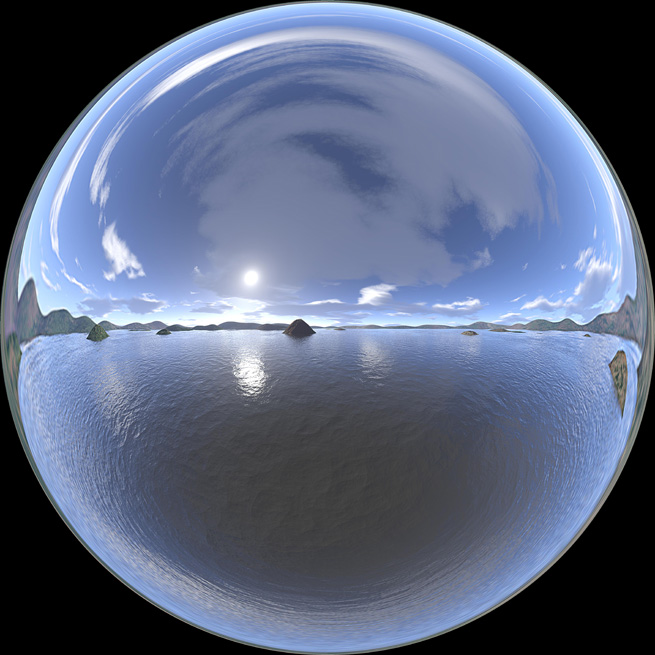 You know, there is a tutorial for creating a similar sphere as that one. I did it once.

Thats actually some fun graphic manipulations done in photoshop. You could use gimp too.

I dont know where that tutorial is though. You may want to do a google search for photoshop tutorials spheres or something like that.

Everything you see there is created, I mean the shadow is made and put on it, the light streaks, everything. I think it was made from two images.

Also, I think you may be able to make something similar in blender, using procedurals.

Or maybe even uv map to an image and use reflective? then do a screen print of the resulting reflections that show in the GE. Never tried it. Could work though.

As for creating the panarama and adding the top and bottom, there is a tut on blendenzos site. Its a pain.

Yes there is software to help make panarama pictures, I think one comes free with windows software. But you still have to manipulate the top and bottoms
I’ll see what I kind find later. Cooking dinner now…then eating it…

Yo, thanks for your efforts to help me…

However I have find a little hint from this:

This is not exactly what I need but it tells of such a software as autostich…Its small and free to use for personal use…its even used by ILM guys…cool. Its probably been used in making Star Wars, what a credit.

Its very small software and does not need to be really installed so you just copy paste it to your desktop and double click it. So its easy to delete if it is not needed or makes your computer unstable.

I wonder what you think about it, it may help a little. But it does not make top and bottom which are obviously rather painful to do…this is where mathematics becomes very complex.

Well, I didnt find the one I followed to make that same sky sphere you pictured, but there are still a lot of links to look at from the google search.

Oh, I have the serif version of stitching, but I think it didnt work correctly. I mean you still have to fix the overlapping… I dont remember its been a long time.

Be sure you check out the urls, there is one I know you will really like, in the top of the list somewhere.

Many thanks for help…

I’m trying to use Hugin to build a skydome. Hugin is a great free package that does everything automatically to build a panorama.

http://wiki.panotools.org/Animating_panoramas_in_Blender suggests:
“…so convert the scene to a square 360° fisheye image with the principal point on the horizon. I use Hugin for this …”

However, selecting “Stitcher” “Panorama” “Fisheye” doesn’t give a full circular fisheye image … and doesn’t seem to work in Blender as a sky map. Is it essential to have 180 or 360 degrees of vertical images as well as 360 degrees horizontal ? ( My test is just using a set of images around the horizon but nothing overhead).

Is there something else I need to do in Hugin or Blender ?
Thanks for any help.

I think I may have found a way to do it … build a panorama with Hugin; paste onto the centre of a black square the same width; open the single square image in Hugin; render as a fisheye. It seems to work fine as an angmap in Blender, although strangely the sides of the circular fisheye image are cut off.