How to make water that my character can walk into

and a waterfall in GE.

I have searched this forum and found a few threads. One has a .blend but is not there anymore.

try this,…make a plane with raymir, and a stucci texture,…animate the offset of the texture,…render an image sequence of it, and use that as your animated water texture. if you want circular ripples then the wave effect is fine, but if you just want regular water, use the stucci texture with animated offset. you can set keyframes in the material window just like in the 3D window and the IPO window. once you have the sequence you need to know how to make it into an animated UV texture. also if you need a waterfall, or rapids, try rendering an animation of particles made to look/behave like water.
<edit> also there’s a freeware called caustics geneator which does animated tiles.
…

But it’s over my head. Please help with the above, or point me to something newer. I haven’t learned python yet.

I would guess learning wouldn’t really help me with this since I don’t understand what I would code to make water. If you follow me here? :o

OK and thanks in advance,
Iti

this looks like an explanation for animations, as opposed to the GE; raytracing and procedurals are render-only. for a GE waterfall, I’d use a plane with an looped, scrolling texture (look for a UV scroll script). If you want mist, you could try to make a variation of the fire/smoke in monster’s tutes emitting from the base of the waterfall.

I can’t help you much in non-GE water, but maybe somebody else can.

LOL. I did think of that, I need help with the mesh part and making it look like it ripples as the character walks into it or kicks it or?

Ok, I will search for that now. I only want the moving water in the GE.

Thanks to both of you for helping. Its hard to even find a beginning spot when you are new to all this.:o

Azazel,
Thats so funny, I was just there about 5 minutes ago, but I didnt see the old stuff. Thanks so much for the info. My fingers are crossed.

All that I hope, is that it helps

Hi ititrx
If you want flowing water - see my screenshots in MechaCop game.To see it in action in BGE just download the demo and BGL - skip the first level using “vetri” cheat code. In the second level you’ll find the water at the beginning. If you want something like that i’ll tell how to make it. It is very simple technique - i use animated textures.
http://blenderartists.org/forum/showthread.php?t=92984

It’s not mine, but I’ve had it for some time. It was made by Novaserph, but I haven’t seen him around the forums for quite a while.

It’s not mine, but I’ve had it for some time. It was made by Novaserph, but I haven’t seen him around the forums for quite a while.

Thanks very much I will.

Oiy, it made me see sick. wow. Thanks again. I will play with it.

I think this would work great for a hydroplane track. I have been looking on line for a game like that forever and never found one. Maybe someday I will be able to build it myself.

This is a script and I havent even been able to figure out how to access it, lol. I have a headache again. But I did adjust it to a be almost still and fun to watch.

It’s awesome !!! But its slow :S I m waiting for the day in gameblender will have vertex lpo. Until then, its a nice script to work.

It’s awesome !!! But its slow :S I m waiting for the day in gameblender will have vertex lpo. Until then, its a nice script to work.

The script is slow? Does that mean on your machine the waves are slow? On mine it was too fast. Just curious. Thanks.

The waves goes perfectly on my machine. The problem is the CPU consuption. Its much for only an FX. The waves alone are great, but if you use it with anothers logics (in a complex game) + physics and these things can be really slow.The trick could be switch it in off when the player dont look at the water. I dont have any problem with the script, its simple and an great example of how move vectex in GE. 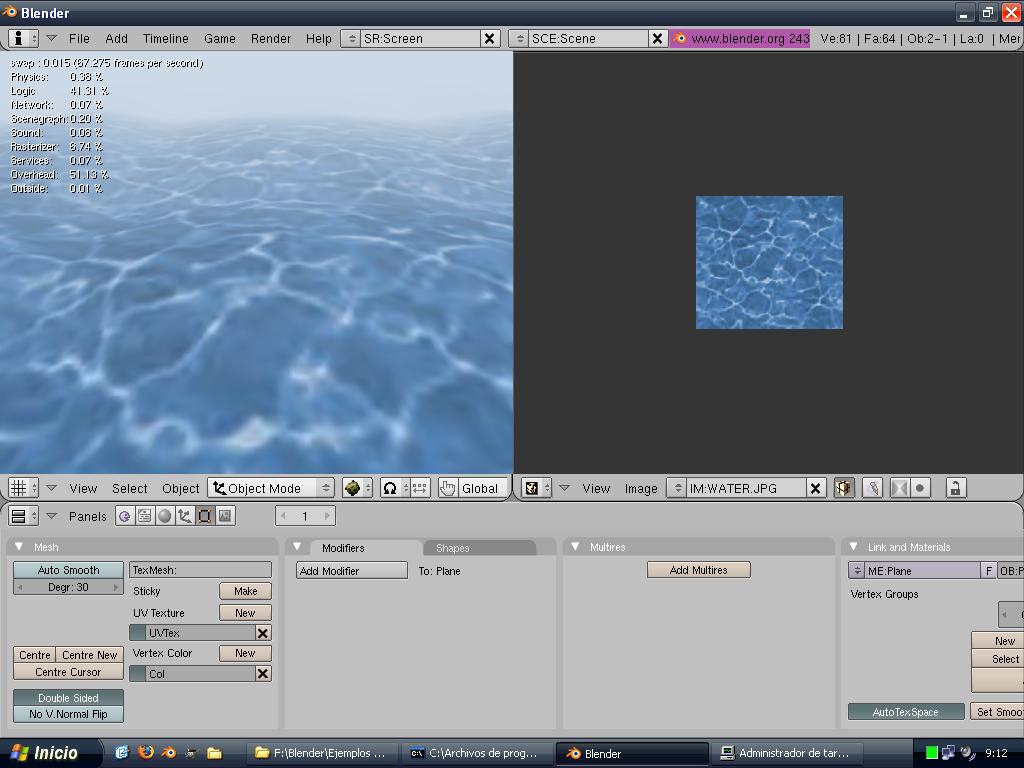 I am hopping we get some more control soon…
look here:
http://echo-plugin.sourceforge.net/about.php

somewhat of a “fart in the wind” …
but it is the only hope we got… please keep wishing!! (and send hope,money,cheap whiskey,free pizza,expensive beer,rent money, and hookers to snailrose!!)