I wonder what to use for model this fretwork. I’ve got a test task, given me by possible future employer.
He gave me only this image 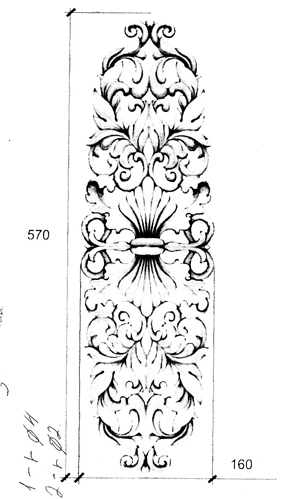 I tried to make it in ‘Sculpt Mode’, my pc get slow running with all this one hundred thousands vertex. And all this brushes makes a mess, but not the model.

Tried make it with Surfaces, the same mess.

What techniques to use to achieve results? some tutorials or tips would be nice

try using displacement. it only works on a dense mesh, and it’s kind of sensitive. hopefully it will work somewhat. you might touch it up in photoshop or gimp a bit first too, to make the shading less severe.

Yestarday I read about this technique. By this link (rus). And this is tutorial for 3ds max. Where I saw this technique in ‘action’, but I thought there is no such function in Blender.
And after yours tips I got it, where to find this functionality.

Greate thanks! I definitely try it immediately.

You may also want to look at this,

Trying to isolate a tileable pattern from a photo or sketch to use in your 2D and 3D projects can be a pain, and often involves tedious tracing of patterns by hand. I’ve come up with a method…

I would just extrude it with a mirror modifier. maybe you can use curves for some then convert to mesh then adjust. Use this picture as a background image. You are going to want a nice even mesh. No fancy tools. Start at the center.
Hope you get the job.

I would have done it like this:
Picture isn’t the greatest, so any displacements, normalmaps won’t work here.
Since it’s symmetric, it’s only 1/4 what’s to model.
Deal with background image. Strighten in Gimp (rotate), cut out 1/4. Set in blender for top view background.
Add plane and in edit mode subdivide (Ctrl-R), move vertices to follow one detail, say for leave you see in example - cut initially in 4 vertical parts, adjust vertices. Then subdivide horizontally, adjust again. When more or less done, apply Subsurf modifier, make some more cuts for grooves and pull middle lines up as needed.
Then in object mode add another plane and start next detail.
When all done, join parts, duplicate, mirror, join again. One more time mirror and that’s a finish.

Might be a bit of pixelpulling work, but doable. 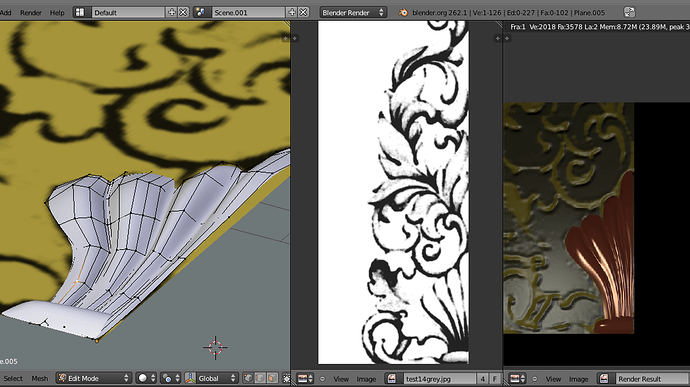 So, I’ve tried different way to solve my task. And finaly I got the good technique to model this fretwork.

Firstly I’ve tried ‘Sculpt Mode’, this technique failed for me. Slow computer, misunderstanding about brushes and so on. Also I’m not the true artist for this method.
Secondly I’ve read tutorials found by my self and given by you guys. What can I say? Method with ‘Displacement Modifier’ is good, till you have good prepared image. In my case I have only this b\w image without gradient. I tried to make it more appropriate with Photoshop, CorelDraw, again Failure.
Thirdly I tried method proposed by ‘eppo’. Simple mesh with Stack Modifier. Subsurf and Mirror. And this is what I’ve got 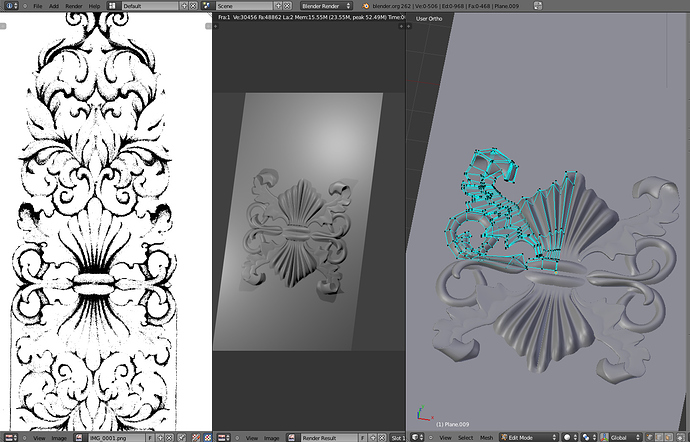 By the way, it’s not for this topic, but what price/money I should ask for such task? If it was real work…

Not sure but if you gonna need this for a 3d prints, there will be one more tedious thing to do - close mesh, make flat bottom part. As far as i have red, 3d printers work with closed volumes only.
You could use another subdivided plane to shrinkwrap on top of the modeled one but there are upwards bent parts, which probably wont come out of this nicely.
Anyhow - great job so far! Glad to be of help…