How to prepare character for rigging? [Beginner questions]

Okay so I’m quite new to Blender and I’m trying to rig my first character.
But there’s a few things I’m a bit confused about and I might not have the right words yet to properly search for it. But hopefully these are quick questions to answer or it’s easy to direct me to the right place to look for answers or follow a tutorial. 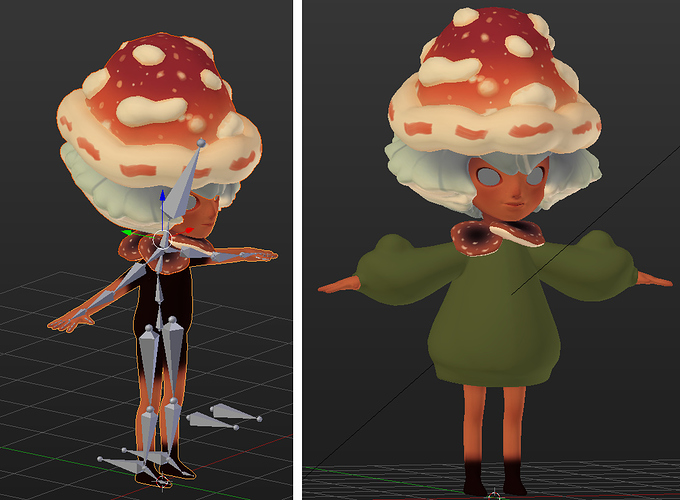 This is the character I’m working on and right now everything is separate as individual objects like this:
The body.
The eyes.
The hair.
The mushroom hat.
The mushroom neck pieces [4 separate objects]
The sweater. [Unfinished]
[I still need to make the teeth]

I am following this tutorial: https://www.youtube.com/watch?v=PM8mOq9RiNE

I’ve finished the armature as shown in the first part of this tutorial, but now that it’s time to connect the armature to the character, I’m a bit unsure how to do it. It looks like all the parts of the girl from the tutorial are a single object separated by vertex groups?

I’d like to know if there’s a way to make the rigging work while keeping each object as separate [Or if it would be too complicated/cause problems]. Or if I need to merge all the separate parts into a single object for the rig to work?
And if that’s the case, how should I go about it?

I think a lot of things should be able to work even if they’re separate. Especially because a lot of it shouldn’t move too much like the hair and hat. But I don’t know how things will work with the Sweater and neck parts that should interact with several parts of the body. Is this part of the rigging process or is it a particles thing? Which is something I haven’t got to just yet.

Should I just continue following the tutorial and connect the armature to the body and then worry about attaching the rest of the parts later?

I’d also really appreciate any links to tutorials that deal with this part of the process!

I’m still newbie too, but I think you should learn about weight painting. I’m still learning that too.
I follow from this tutorial from youtube. https://www.youtube.com/watch?v=Q2MGttB1E7U

You can keep the parts separate. Things to keep in mind:
The vertex groups of each part must correspond to a part of the armature. So for instance, the same bone that moves the head will also move the eyes, so you’ll need a head vertex group in the eyes. Or, you could parent the eyes to the head bone, but you’ll have to play around with different poses to see what works best for your model.
If you wanted to combine everything into one mesh, you just select a part (eyes) then shift+select the body and press Control+J.

Hello! Thank you, thank you!!
That video/series is perfect, It’s really helping me with all the questions I had! I think I will continue following that video for this character as well as try and follow it next time I made a new character, it seems so complete <3 thank youu! You saved me!

Ohh! I’m not entirely sure I’d know how to apply this just yet BUT I think I do understand.
I will definitely keep it in mind that the vertex groups need to correspond to a part of the armature as I move forward! And once I get a better feeling for rigging and posing I’ll also check out that idea of parenting the different parts to the corresponding bones, thank you!!

Oh and thank you so much for also adding how to combine everything into one mesh, it’s exactly what I was looking for, thank youu!

tHIS IS WHAT I WAS LOOKING FOR! tHANKS!!