How to setup a HDRI to get sharp shadows ?

VizPeople had released a few non commercial HDRI’s about two years ago.
In their examples they get sharp shadows but I always get only soft shadows. 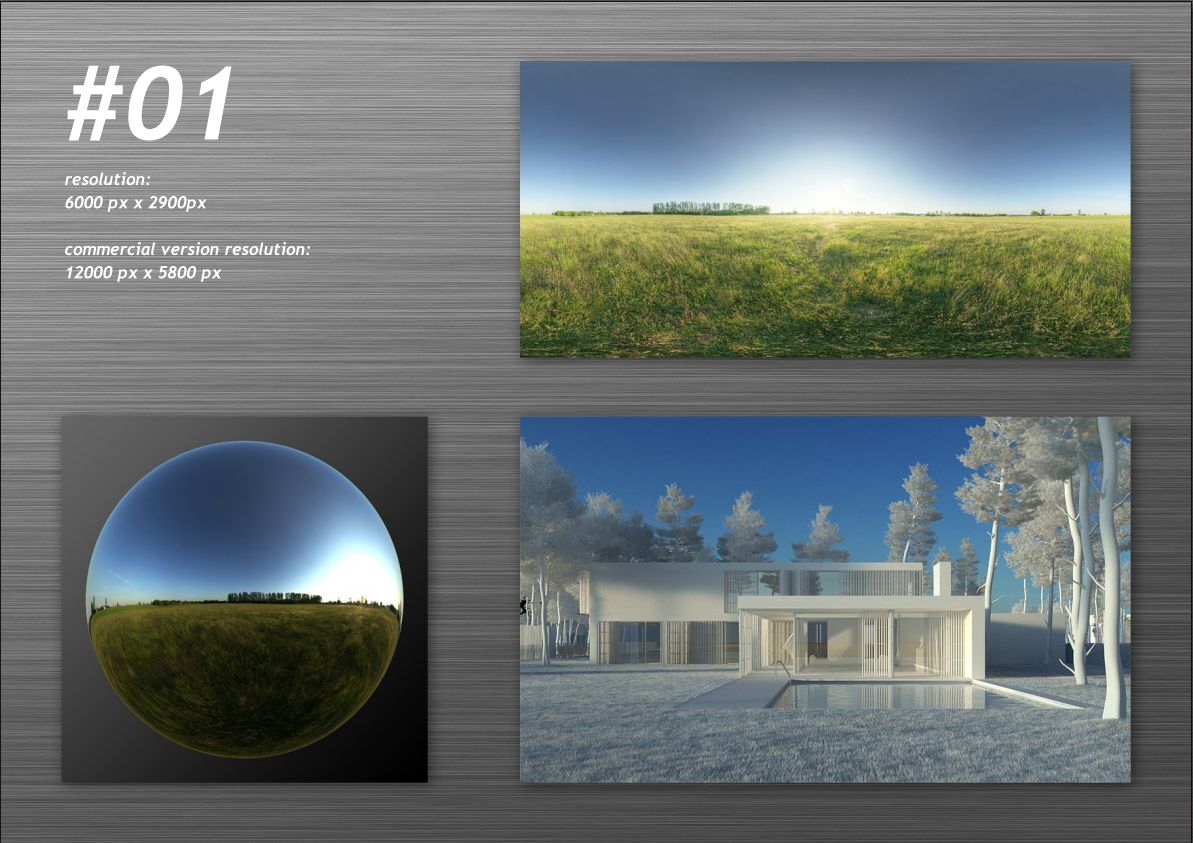 And this is what I get: 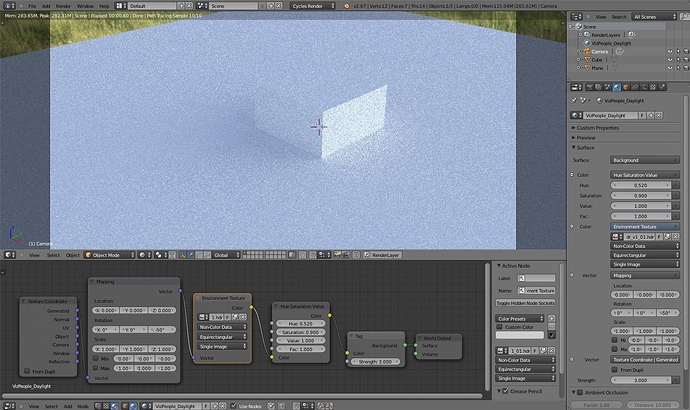 Does anybody know what I do wrong ? 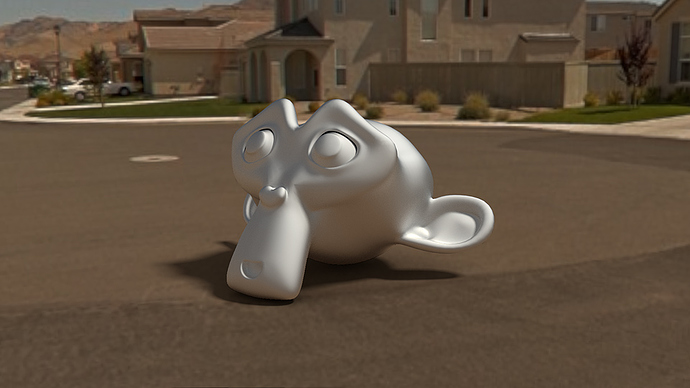 And don’t forget MIS activated under world tab, you had it turned off!

Or you can use a high quality .exr UPDATE: My  HDR Sky shop  is now open, please buy my products there instead, thanks! Before I start making new...

reC but you can get shaper shadow with this one too, that was Alain question.

@marcoG_ita: Thanks, didn’t realize that one. Helped me a lot, since I have had same problems. Btw, I also added desaturation if I’m “gamma’ing” too high, and setup camera/glossy/transmission light path mixing so that this “special map” didn’t influence those parts. Too high gamma requires extremely low strength, ending up in noise hell though (noisy as hell even at 5000 samples, lol - yes, MIS is on for world). For that reason, I’m probably still going to stick with Steve S method of only using HDRI’s for ambience and reflections.

Or you can use a high quality .exr

I made a light probe of my own using 8 exposures, but I’m not getting very distinct shadows even when using the tips mentioned above. Here’s the darkest and brightest images from the probe. I can’t get much brighter, but should I be going darker? 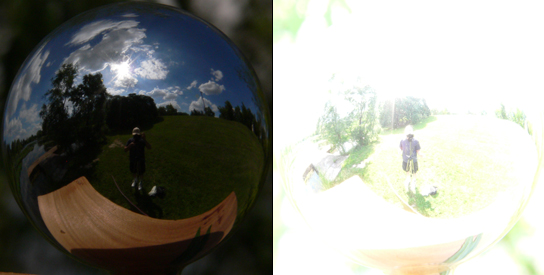 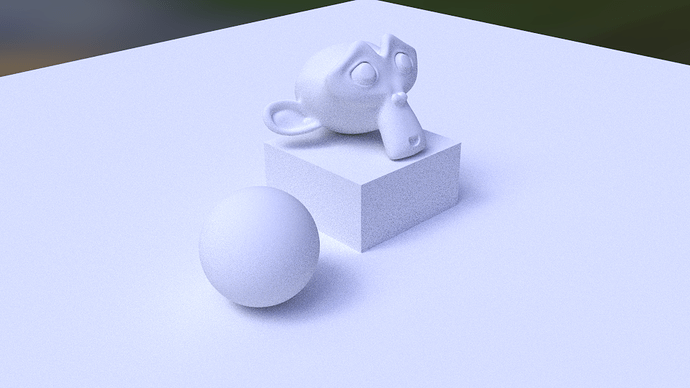 @CarlG - glad it helped. Yes going over too much will get your sun become a supernova

But it depends on your hdr. If it is good quality and has a well contrasted sun point, it will produce usable sharp shadows. If you note the first post those shadows are not so sharp either, from vray. It’s not the best map for sharp shadows, the brightest point is not that small.

Steve, my suggestion was relative to Alain blend file. If you provide yours or post node setup we’ll see what’s going on.

Steve, my suggestion was relative to Alain blend file. If you provide yours or post node setup we’ll see what’s going on.

I just used Alain’s file and loaded my HDR image into it. I’ll try making another HDR with a greater EV range and see if that helps.

Thanks, it works great

There is another trick to get hard shadows using two sun lamps without affecting the scene lighting.

Add sun lamp Shift+D to duplicate it ( DO NOT MOVE THE DUPLICATE ).

We are going to give the duplicate a negative strength value of -1 and uncheck cast shadows.
Basically the lights will cancel each other.

Here is a pic of how it looks like

Otherwise you could open the HDRi in Photoshop, edit in 32bit mode, and paint a bright area on the sun. Ill try an example and post it.

Edit: Yep it works fine. I opened the HDR, found the sun area, changed the paintbrush until it said +20 stops, and did a small dot on the sun (or where you want the light) 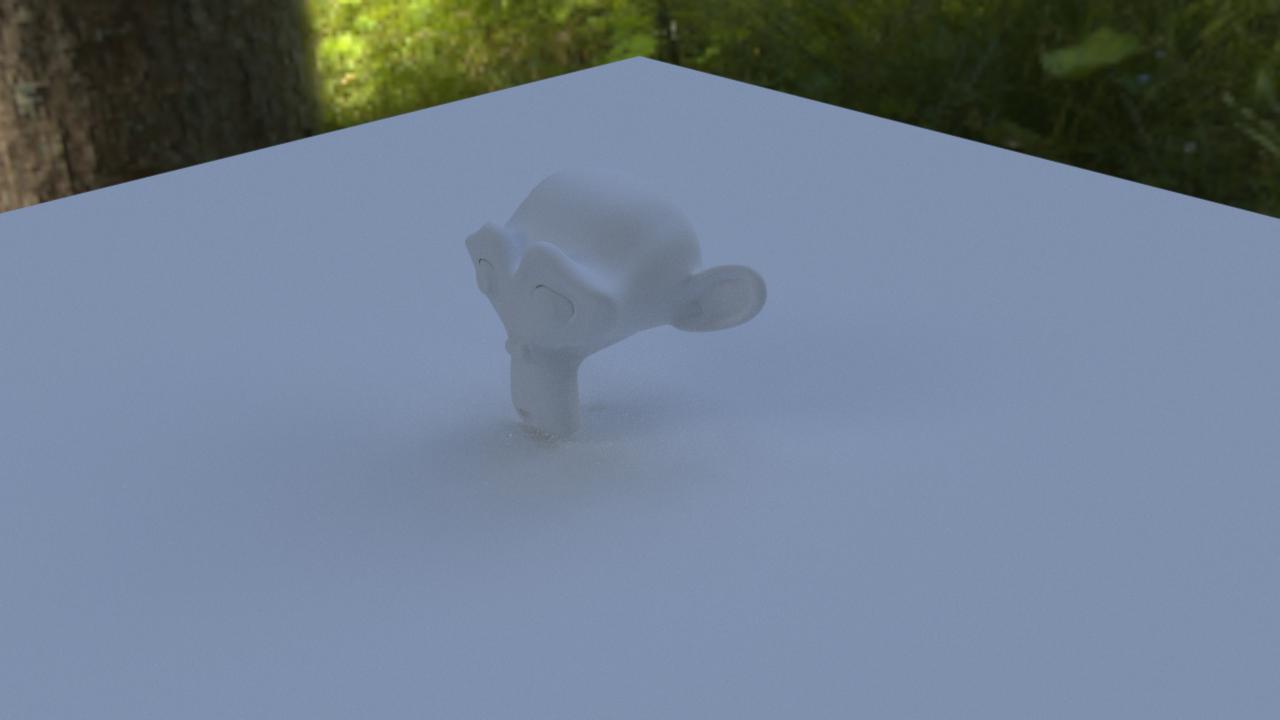 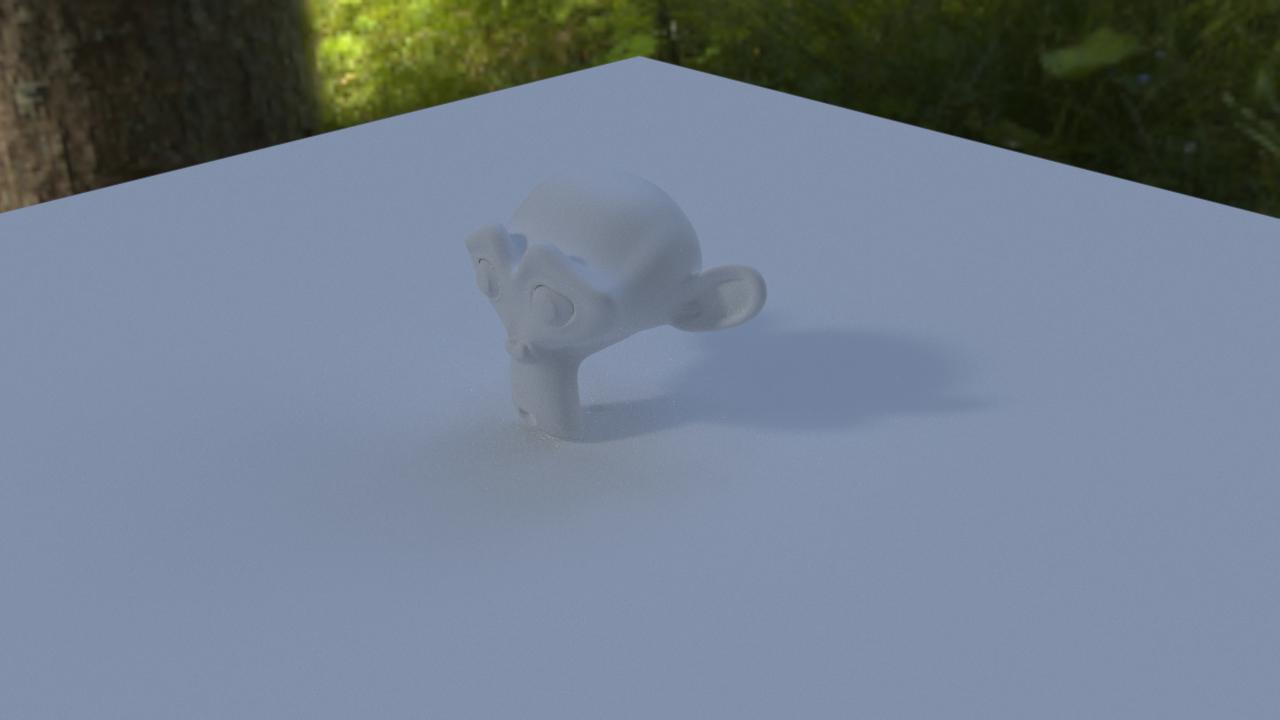 Otherwise you could open the HDRi in Photoshop, edit in 32bit mode, and paint a bright area on the sun. Ill try an example and post it.

Edit: Yep it works fine. I opened the HDR, found the sun area, changed the paintbrush until it said +20 stops, and did a small dot on the sun (or where you want the light)

What version of PS are you using? I’m on CS2 and it wouldn’t let me edit in 32-bit mode.

What I did was to go back to my original eight JPEG exposures. I took the darkest one, duplicated it a few times, opened up Levels and darkened the Midtone slider on the duplicates. Then I reassembled them all in HDRShop into a new HDR image.

The image at far left was originally the darkest one that I shot. 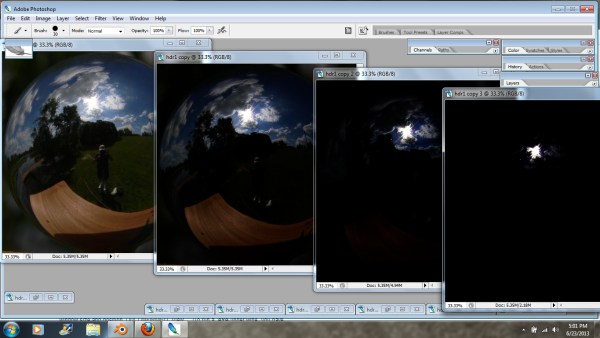 The resulting render. Works pretty well but I had to crank up the Strength setting to about 60. 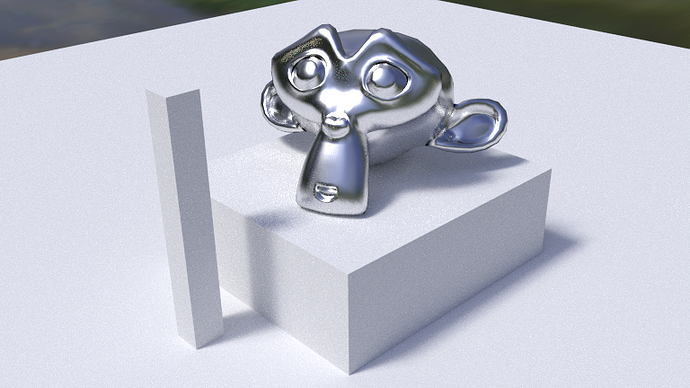 Or use this here

Use a HDR + Sun Lamp

Catching cast shadows is pretty easy if there’s a lamp or mesh light lighting the scene. But it’s apparently more difficult if the scene is lit entirely by IBL. I can catch the AO pass, but using the Shadow output on the Render Layer node just results in a solid black plane.

So I came up with a simple, if crude, cheat. Use the Image output from the ground plane and send it through a Hue/Saturation/Value. Set saturation to zero, turning the image to grayscale. Then turn up the Value all the way to 2.0 to lighten plane. Then send this through a Color Balance node and turn up the Gain slider to lighten the plane even more until it’s white, or nearly so. You may need to turn down the Gamma a bit to darken the shadows.

Then just use Mix:Multiply to merge the shadows with the background. I don’t know how well this will work with a complex scene, but for a simple ground plane it works pretty well.

The balls are by dzerbs and were downloaded from BlendSwap. 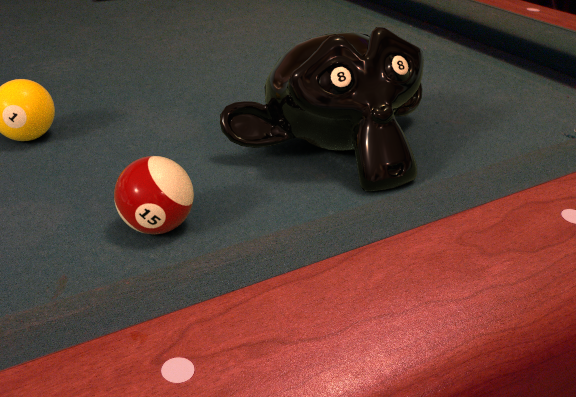 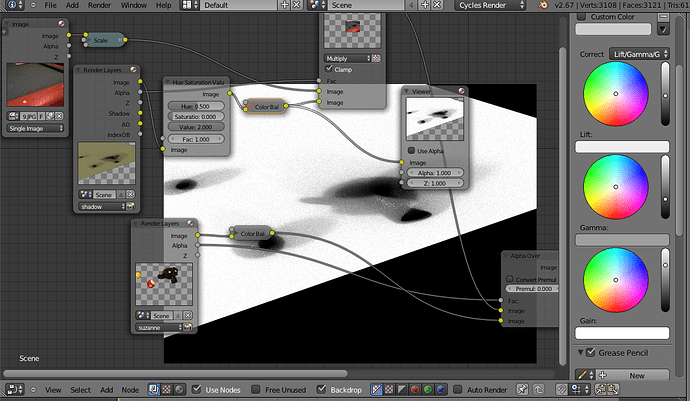 This is another approach of the @marcoG_ita idea, trying to reduce the effect on the environment color : 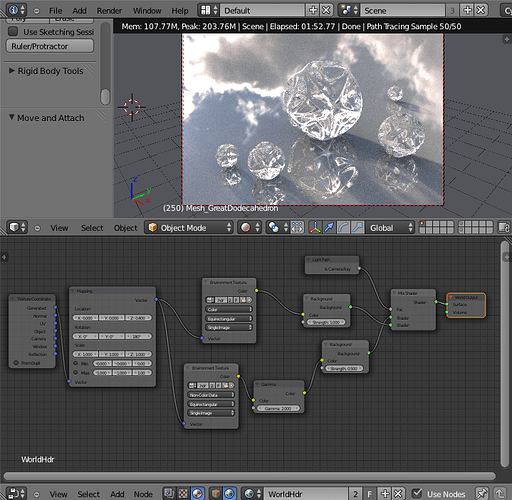 This is the node setup. The HDRI image is the same, but its color space parameter is changed depending on it is used for camera or not:

And here there is a HiRes version of the scene with some compositing.

Shadow is acceptor light source. HDRI is commonly used to do the ambient light. you can use the technology here:http://www.foxrenderfarm.com/

@elbrujodelatribu - already did the trick in my post actually, for camera ray i used the vanilla texture, didn’t show it though, i thought it was basic, also it should be used carefully, because it display the “not-gammaed” hdr but light and shadows produced are pretty different and high contrasted.

This is another approach of the @marcoG_ita idea, trying to reduce the effect on the environment color :

Is that all CG or can you use that for compositing into a background photo?