How to texture high poly model

hello, i have this model, this model has a very high poly count and am hoping to turn this into a low poly later down the line, i have 1 issue though, i dont know how to texture him, i know what i want, or at least i think i do, and i dont know if i have to hadn’t texture it or if there are any thing that i can just pop onto the model, i want to make them look like like aluminium rope. this is the model, as you can see i want wires but i didnt put any actual cylinders for a wire texture to wrap on top of, which is because i want the body to stay looking organic though being made out of metel wires, how would a texture over these sculpted wires here, thank you. i need the metel rope to match the positioning of what these ones do, if i cant i have as mooth version of this model at only 4000 polygons if that would be bettere, still in the same positioning as the hight poly mdel though

I would not even bother to texture a High-Poly model till you have re-topo down to a lower-poly model! Then you can bake your normal Map for the UN-wrapped Low poly…Trying to get an unwrap from a Hight poly is really a waste of time and effort and is not an easy thing to do…

All that said, it is absolute to have a good UV to start your textures…so as soon as you have a lower poly, Unwrap it and Bake your Normal…you could also bake a roughness AO and everything but a Diffuse as it doesn’t have one as yet…for that you could start with a basic wire wrap aluminum cable and apply it to your UV map as strips or to wires if you are going to add them… 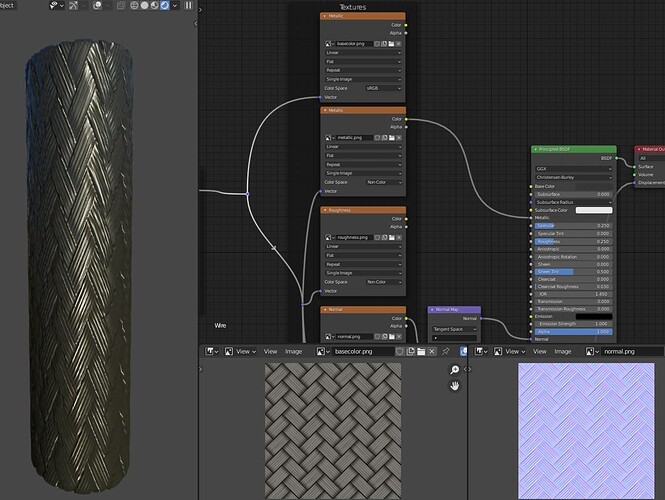 i do actually have a low poly smooth version of my model without any sculpted on wires, i can se you used a cylinder to make your wire texture on top of, would that be fine if it was for a humanoid model like my model, im just asking since i dont want too many polygons i have a 4000 limit so i want to put the cables in the areas that my model in the image above, is there some kind of plugin that i can drag the textures where i need them to be, its a little confusing i know, but if there is a way like i am explaining, is their??

I am not fully sure if I understand, but if I wanted a character made from ropes, here is what I would do.

First, I would not try to sculpt the detail, but instead I would make a high-poly character using curve objects. If you need each rope to have more detail, I would add a bump map to the curves (you might want to setup and test the material on curves in advance, curve texturing can be a bit complicated).

Then, I would make sure I have a clean, low poly mesh that matches the shape of the high poly as well as possible and has a good UV layout. Then, I would bake a normal map and ambient occlusion (to be used as a base for the color).

If this sounds too complicated, I have an other method, without baking.
You would use only the low-poly mesh. Make a seamless texture with multiple wires side by side, then arrange each UV island of the character so the wires have the correct size and orientation. Then, model a few actual 3D wires into the mesh to hide the seams.

Hopefully, there are some useful ideas in here!

i will consider this option actually, thank you for the ideas, i will defiantly tell you if anything is succeeding

OK…first the wires…I would use either a plug-in, something like Cabelnator or add Bezier curves with rounded bevels…It can be kept to the minimum vertex count you need…and they could be textured as shown in my pix…
As far as dragging the textures around…yes there are plug-ins that allow you to use Texture Paint to add PBR textures…like PBR Painter…here is a good list…

thank you very much