My chairs have 4 legs. I wish to cut an additional line horizontally on each legs at the same horizontal location. Ctrl R can only cut 1 line at a time which I feel is very slow and the cut at each legs might varies in location.

Anyone knows how to cut the line for 4 legs together at one go?

You cannot cut them at once in 2.57. Ctrl+R creates a loop cut, selecting more than a single loop won’t work. You need to learn your tools and think more creatively. Are the legs all the same? If so why not use an array modifier so you only need to edit one leg, or the same with linked duplicates. If you cut one leg and then want to cut the others at the same height use the snapping function (magnet icon on 3dview header)

Misread the post… yeah you can’t do it the way you want. Follow Richard’s advise while I go get some food for my brain.

just loop cut and adjust by the same dimensions, i.e. manually enter the dimensions, otherwise mirror arrays would work. Sure there are also also other ways.

If the legs of the chair are reasonably the same in geometry, you can do this:

Thanks Fweeb, the cut works.

Richard, I can’t use array because I use extrude to extrude the 2 legs together.
I do have one other questions. I notice that Blender is very much different from 3ds Max in a way that many functions like sub-divide/bevel/etc have lesser flexibility where cannot be use for individual face (applies to the whole objects). Thus, I have been wondering if the right way to model is to model partial objects and then to merge them when the whole object is completed. Example a chair is made up of the seat, the legs, the handles. What is the most effective way of model them in blender? model them separately as object first and when completed, then only merge them together as a chair? If I merge in this way, will it cause problem in the future if I want to play with animation where the body move but hand don’t move?

I see it this way. In the real world do you carve a chair out of a sold block of wood ? If not, why would you do so digitally ?

That’s dumb.
You carve sculptures out of a block of wood, so should we totally sculpt everything out of it!!111one

See your flawed logic?
No, probably not.

sorry if I sound stupid…but I am totally new to 3d and blender. Still trying to figure out many of the basic staffs. Thank you for your patient

That’s dumb.
You carve sculptures out of a block of wood, so should we totally sculpt everything out of it!!111one

See your flawed logic?
No, probably not.

I don’t think you see your own flawed logic. Sculptures can be one piece, some are not, however you can make a sculpted piece out of one piece digitally, that’s true, but for other things that are manufactured and are not one piece, for example the keyboard that you typed you misguided logic, the chair you sit on while reading and jumping to conclusions, are indeed made of separate pieces, and therefore do not need to be modeled as one mesh, but rather separate meshes made for the assembly of these items such as they are in the real world. To limit any approach to modeling anything, to one way or another is a hindrance and should not be done.

Richard was merely stating a fact using a real world example for the basis. The real world object being the chair that was presented, which is in fact made of separate pieces, unlike some others that may be molded or carved out of a block of material, which would be contiguous with all of its parts and need to be one part, but in some cases are modeled in separate parts. In this case the parts would be separate, regardless of whether or not the individual parts are joined in one common object or left as objects on their own.

@alice_ylk You can model all of your parts in edit mode under one object. In fact that’s how I made my chair, one object, many pieces… 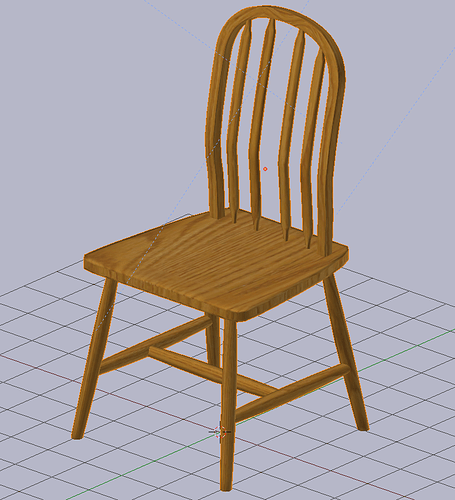 I hope you didn’t spend too much time on something I’m not going to read, ajm.

ya I did notice something is not right. As modeling can be complicated especially for those beginner like me. In fact I have been doing try and error as there is no much resources available in Singapore. Any error/wrong concept might means re-do everything again. Thus, I posted the question. Thanks for all the clarification. All your helps are appreciated.

One thing that would help you is to do some tutorials and get more familiar with the tools. Try Blender Guru or Blender Cookie. Both sites have lots of 2.5* tutorials.

I notice that Blender is very much different from 3ds Max in a way that many functions like sub-divide/bevel/etc have lesser flexibility where cannot be use for individual face (applies to the whole objects).

You have hit on yes a fundamental difference between Blender and other apps. The modifiers do work on the object level. So you kind of have to shift your way of thinking. I am still trying to adapt. But I have found that modeling in Blender is a process of switching between Edit Mode and Object Mode and using the benefits of each mode. For example something I do a lot is snap a portion of the model I am working with to another part. I do this by breaking the part out into a separate object and set the origin to the place I want it snapped and then enter Edit Mode of the part of the model I want it snapped to and select the plane or vertex I want it snapped to and put the cursor there. Then back in Oject mode I can use the cursor position to snap the object in place. Cltr J joins them back.

This is much more precise than the snapping options in Edit Mode.

The same can be said for curve modifiers. If you have parts of an object you want to apply a curve modifier to you have to do that as a separate object. Works great for tubes and so on but can have other uses. Same for the Simple Deform modifier, Solidify and so on.

And another use I do all the time is to isolate the object into different parts. I very often model an object first in separate parts keeping them on separate layers as I go allowing me to concentrate on one part at a time then merge them together at the end.

I think you are on the right track. Your chair model looks nice. Keep up the good work.

As has been stated, I recommend breaking the model up into different parts. There is no need to even connect them, unless for some reason this is a requirement for some you are trying to do. Also, is there any reason you do not simply make one leg and then duplicate it (SHIFT-D)?

I hope you didn’t spend too much time on something I’m not going to read, ajm.

Nope, I have plenty of time, and it was probably educational to others.