this is my first serious try of a human Character. Her Name is Barbara, and she loves Blenders Texture Painting and Texture Mapping Tools. Besides she is a great Fan of the Cycles SSS Nodes. As you can see, Barbara still hates Hair Rendering…

The Basemesh is designed in MakeHuman, the Skin is made with Blender using reference Images from a professional Female Modell. Texture Mapping and -Painting done in BI, Rendered with Cycles.
Renderjob was done with SheepIt Renderfarm, it took 10 Hours to Render the Orignal 4MP Image with 2000 Samples.

Please be so kind to offer some helpfull Critique. In Detail, please tell me how i can improve my Model, especially some Help with the Hair would be find. I don’t know how to make it more soft, round and less plastic. Besides That, i don’t have a good Hair shader, so some node setups would be fine too.

Thank you in Advance an Greetings from Germany. 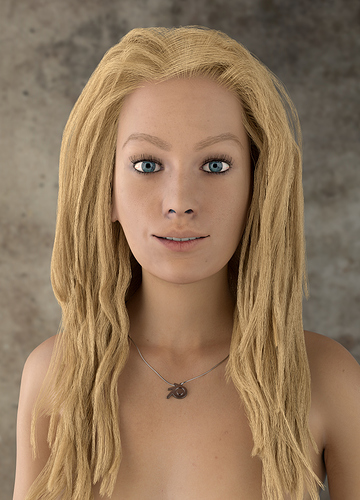 I’d be interested in knowing how SSS figured into the texturing. It looks great.

Well you have done pretty well. Hair is tough in blender. I can see your biggest fault is in the top of the hair line. Its not natural. Also are the eyes. It is so tough for most people to get the eyes right. your pupils are to white. Look at any photo of eyes…the more you open them…the more you have to work on the gamma and color. grey em down just a bit. If I could take your render from the lips down, great…Fix the eyes, and don’t worry about how to render it for ten hours, fix the eyes and render it for 2 minutes. I love the flesh on the upper breast. Really nice. You’ve got a good thing going, but work on the eyes.

A good start, but getting humans to look realistic is one of the hardest things to do since we are naturally geared to spot anything suspicious about the human form. In this case the eyes are not a natural shape. The eye lashes look like they are coming out of the wrong place (I can only really comment on the lashes on the lower eyelid in this case). The smile looks rather fake too, I suspect that is a result of posing a rig? I don’t know what your basemesh is like, but I imagine that most rigged models will do a pretty poor job of replicating the change in the muscle shape under different expressions. It’s hard to tell with this lighting, but the skin looks a little too smooth and just a little like a wax model. How have you set up your SSS? Are you using multiple layers?

that was one of the best settings for hair I found. I think from there you have to play with the particle settings to find what works for you.

for the skin i used this shader: http://www.blendswap.com/blends/view/60646
The UV Map was created with texture painting an texure mapping.

i like your reply. You wrote: “I love the flesh on the upper breast. Really nice”
Well, that’s what we all love

Nevertheless, thank you for your Hints. Do know about a good eye shader? I tried my own version with SSS, but i’m by far not satisfied with the eyes. How can i make them both shiny and transparent, hence natural?

Hello Matt,
thank you very much vor your comments. The Way you’re focusing my issues shows me that you are a person from which i can learn a lot. You Sketchbook also look very good.
The Basemesh of my first attempt doesn’t have a rig, i tried everything by myself with mesh modelling, because i don’t know about sculpting. he skin might be too smooth because of the lowered strength of the normal map, i will increase it at the next render shot. I think the smile look fake because of the teeth, i have no idea og how to set up a proper material for teeth. Do you think it ist the best way for the teeth to use texutre painting /Mapping from refImages?
By the way, is there a difference in using the SSS node with mesh lights instead of lamps, or do both achieve the same results?

Hope to hear from you soon,

Everything your doing is fine. Since you are not animating this shot, Its a lot easier. The lips are great. The teeth are fine. Get down to the basics. Google eyes, or get a friend to take a close up of the eyes. Then just image map them. Very easy. You would be suprised if you can control the mapping how good it looks. In other words, if your having eye problems, map it out and go into the dreaded nodes. You can control every aspect of the eyes in nodes. You can green screen it or use layers, But the problem most people have is they make the veins and stuff, but the spec and diffuse is terrible. You have such a good start I’m picking on you…Work on the top of the hair to. Anyway, nice. One other things is the distance between the eyes and ears. I know shes young, but your pic looks a little fake right there. try and add A subtle crease, if that is possible. Its not easy, but you can do it. Matt

for a first try this is really good… i don’t know how much model “makehuman” is, so i will not comment on such points.
i like the texturing and the skin material alot. eye shape is wrong (the highest point from upperlid, and lowest point from lower lid form a slanted line. yours is vertical). muscles around mouth are wrong (there is a ring of muscles around the mouth) ,

why does it not look like a smile?
a smile is not just pullig the mouthcorners up, but much more happens in the face. for example, the mouth corners are also pulled back, creating diagonal folds, how deep depends on the “strength” of the smile , the eyes squint a little, giving the eyebrows a more stretched look, and little folds show at the outsides of the eyes, above the eyes the fat tissue is missing, making her eyes look surprised…
the smile of the mouth stretches muscles, and these push skin of cheeks up, which gathers under the eyes, deforming also the lower lid… so, this description sounds dramatic changes, but, no, it need be done, yes, but subtly… smile with eyes wide open like you have reads as if she is saying “cheese” and thinks “is this boring”… i hope it helps… smiles are very hard to sculpt correctly…

Hi Matt,
i’ve got some many advices from you and the community regarding “Barbara”; i will work it out and post an updated version as soon as it is done. But with a daytime job and a three kid-family, time is rare. Keep watching, Barbara will grow !