I can't make the leaves of different colors, using IviGen.

Hi!
When I create ivy, using IviGen, I can’t make the leaves of different colors. I think I have everything in the sample (herehttp://www.3dtotal.com/index_tutorial_detailed.php?catDisplay=1&roPos=1&id=1792&page=2#.VRMdAzusWwB), but will still result in - all the leaves of the same color. 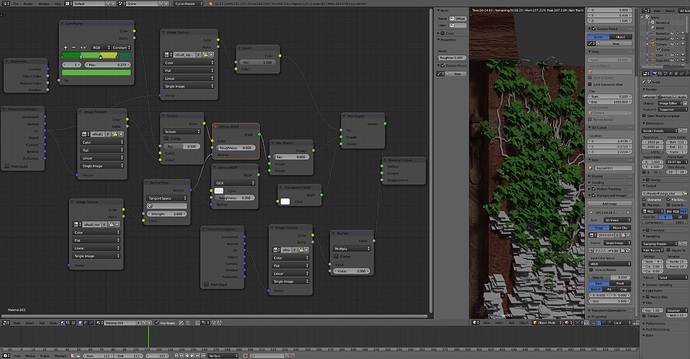 The link goes to zbrush tutorial and the reason you don’t get different colors on the leaves is because they’re not separate objects, so object info returns the random number once.

You could separate the leaves by loose parts then the material you have created will work as they are separate objects to JA12’s point above, I just tested it and it works but it will generate a lot of objects, not sure if there is a better way to do it, this person uses same technique I had a quick search to see if anyone else had done it the same way. Perhaps someone has a more optimal way to do it! but at least this will work for now if you need to get it rendered.

I thought there must be a nicer way to do it I was trying to assign random colours to each loose part in vertex paint mode but you can’t seem to do it out of the box, there’s a small addon here + a paid more featured on that does just that then you can keep all the leaves as one object and use the vertex colours to drive the variation rather than the random node in the material setup.

Here is a simple file to show it works for ivy leaves without separating them.
The random node group is from a thread here which can’t seem to find now.
The colour group is from the tutorial that JA12 linked. 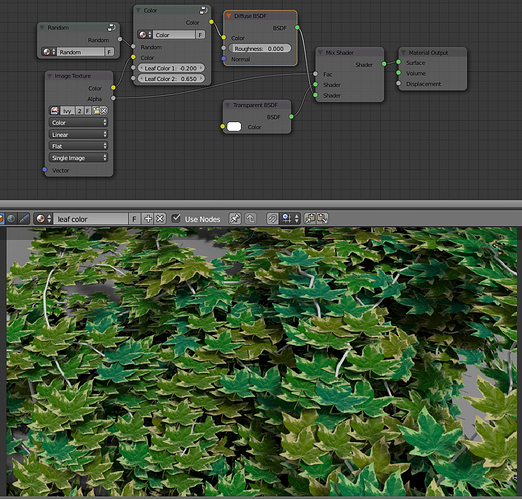 Here is a simple file to show it works for ivy leaves without separating them.
The random node group is from a thread here which can’t seem to find now.
The colour group is from the tutorial that JA12 linked.
http://www.pasteall.org/blend/35241

That a really clever way of doing it, have saved that, thanks

@Secrop
^wouldn’t this make it impossible (too much manual work) to use alphas /per plane?
Although very nice solution for modeled leaves & other multi-geo stuff.

About the topic, the leaves from the Ivy already come with a ‘leaves’ UVmap. For the random part we create a new UVmap as I described in the previous post.
The material should be quite easy to setup… here’s the basis: 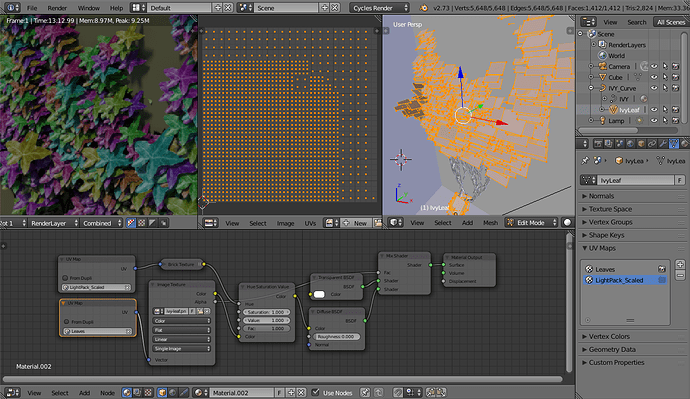 uauu… great, this is just so lovely!
Thanks for pointing it out.

I’ll try these techniques! Thanks again!