I KNOW there is 3 POINT LIGHTING BUT....

what is it called when they use colored lights to set the mood and stuff. I noticed in the backgrounds animators use like a blue or purple light for I guess back shadow, but then I see a whole scene that is all one color, then others like the Blender movie kajimba has mixed in (pic) below. Then like on Tangled. The sky is normal, you can see the halo of the light on there heads but, down around there bodies it is pink.

I also heard something about pixar used a painterly render. I have no clue what that means , but i did like how they textured the animation and I guess it was digital painting, if you cant draw cant you just use brushes of an image to do digital painting for textures?

anybody know where I can find out more about this cgi lighting, everytime I google that I get just the normal lighting, so not sure if this is like teal lighting but not orange color and then theres cinematic lighting. 4th pic in next thread do to 3 pic option, 4th pic has the blue light backdrop in a very lit scene. 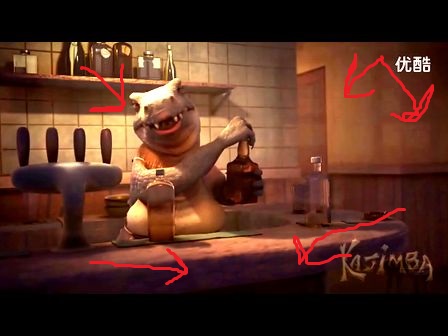 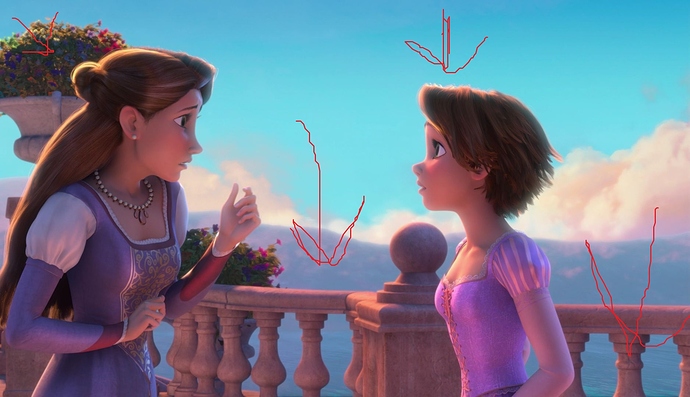 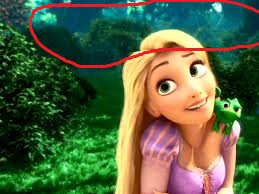 see how there is a blue light in the backdrop

That’s not blue light, that’s just simulated atmosphere. Things on Earth are tinted blue as distance increases due to scattering. Your other examples are just the result of color correction, rim lighting, accents, and fills.

Should I look up key light, fill light and rim light? I cant find tutorials on how they use warm and cool lighting. I did find this but I cant find a set up on how they do it. I do know your suppose to use say for an example you use a red light, you use the opposite color across from that on a color swatch for the cool light I guess.

This is probably done in post production. For the first example, I’d take the render and put a screen on top, with a gradient fill from yellow on top to pink on the bottom. Set the opacity of the screen way down, maybe 6 or 7 percent, and set the mode maybe to lighten only, or screen, or multiply.

On the other hand, they may have used a side light for the yellow highlights on the hair. There are a bunch of different ways to accomplish the same goal.

As to what to study to find out how to work with the tools: go back to traditional art. Warm and cool colors have been around ever since cave paintings. General principal: warm colors are reds, yellows and oranges, cool colors are blues and greens. However, warm and cool are relative terms, so it is possible to have “cool yellows” and “warm blues”. Since atmospheric effects tend to make things in the distance look blue, another rule of thumb is cool colors recede, warm colors advance.

The opposite color on a color wheel is the complement, not necessarilly a warm/cool distinction. Stay away from CGI search terms. Look for ‘color theory’ or similar.

If its not postwork It may just be material shaders.

In your image you point at difernent object so they may simply dont react to the light the same way.

The same light can react totaly diferently from one material to another and even inside one material depending on the angle the face of the object compare to the camera view for exemple.

Light and material are working together.

This tutorial show how the same light can be interpreted diferently by diferent object using the light path node thats another way to have diferent effect with a single light.

The first picture you have was probably created with a Renderman style scanline render engine. In those kinds of engines artists use all kinds of localized, colored point lights to create those rim halos and different colored highlights you see. That kind of lighting is very difficult to do with a path tracer like Cycles, as the light is much harder to control in such precise ways.

I was a Sr. Lighter at Disney Feature Animation and did some early work on Tangled back when it was still Rapunzel. I don’t really understand your question entirely but I think you’re seeing the process as more complicated than it is. These are final renders which can be many layers composited together. Some layers have a completely different light rig (i.e. the characters). This is done to break them out from the background so they are readable. Also, a lot of work is done on shaders to recreate how light plays upon a material.

The backgrounds in Tangled are rendered with a special technique that makes them look like paintings. This effect actually has a falloff and as you come toward your center of interest, the effect gets less and less. You could accomplish this in Blender by doing 2 renders. One painterly and one pure CG, then composite them together and paint your own falloff depth mask. I’m not sure how to accomplish a painterly effect in Blender though.

If you see an image you really like, study its color palette and composition and try to recreate it. You’ll learn a lot from “copying” other’s work. Just make sure you pick someone good to copy. You don’t want to learn bad technique.

If there is a specific question you would like to ask about feature lighting, you can always PM me and I’ll do my best to answer.

The reason why they call it “painterly colors” is that Pixar’s artists are using the same color-blending principles that painters use, although they’re working in the (R,G,B) color space of additive colors … the color-space of digital projection … vs. the (C,M,Y,K) color space of subtractive colors used in printing. (See e.g. this article on color systems.)

The colors that are used in adjacent areas, such as the heroine’s flesh-tone vs. the nearby background, are often colors on opposite sides of the color wheel: so-called “complementary colors.” These colors will work well in close proximity to one another without producing the unwanted sense that one color is “in front of” the other.

There’s actually a lot​ of theory here, if you’re the theoretical type . . .

It’s also worth emphasizing that every shot which you see in any theatrical film is the product of many individual renders, artfully composited together.