I’ve got the basic body done mostly the way I want it so now I’m at the part where I’m going for the Head and Face Design. What I am seeking to do is create a Male Face that is a bit young yet aged a little bit because I want to create a " Commander " with a Military look to him for my first character. I’ve started making this shape and I saved a backup before I started this just in case I’m doing it wrong and need to work on it more. The character will be animated and used in a game I’m trying to build. I was thinking about somehow trying to be able to animate his eyes and mouth but I’m not exactly certain how hard that will be since this is my first game character I’m building so if I can’t go that route at first then I want to at least get a somewhat decent look to fake it all somehow. The problem is I feel like I’m adding too much topology just to get this look. I thought about trying to sculpt it maybe but I’ve heard it’s really bad to do it that way since it only creates more topology then is needed or at least in other programs like mudbox. So at this point I’m not really sure how to go about this or where some good tutorials are for this other then wasting time on google and youtube trying to figure it out more. I want to try to move forward with this and not backwards. I feel stuck on this.

I’ve looked up that Control + Left Click can create new vertices but the vertices seem to not attach themselves to the ring even if I click there. Only thing I can think of is creating more Rings and then just merging the ones I don’t need when I redo the topology to reduce it somehow.

The other problem is I’m trying to think of what would be better - to make eyes, a helmet, and a tongue maybe apart of him or how would I go about creating these on a separate level then? So I’m thinking I should just somehow create these within the model to avoid more work then is necessary but it concerns me that the model would look worse instead of what I am trying to actually achieve in doing with this for a game. I can’t seem to really figure out the mouth and eyes to make them bulge right without indents and extra quads.

Does anyone have any advice or pointers on all of this?

Here’s what I kinda have so far…and yeah I know it probably looks really terrible. 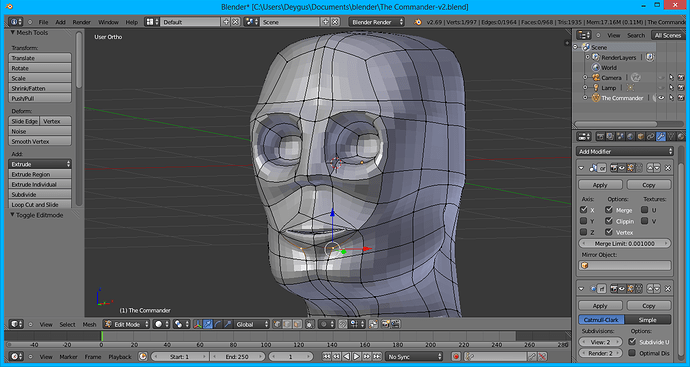 I think I may have found something using this Youtube Tutorial I just found. Maybe I could build this separately then somehow replace the head to merge onto the head of my Model for my character. Would that work maybe I think?

Yeah, I figured out that it actually solves my own problem on my own so just continue ignoring this thread as you were, thanks anyways though. Anyone else who’s new can just look here and get a better idea of how to go about doing this for future reference. I’m just going to make that and import it into my main char’s file then merge it to be used for the head. The same guy in the head tutorial has a good ear tutorial also!