I need some help with shoulders :(

I’m not sure if I added this image right, but I need some help with the shoulders on my character.

I know it’s hard to see, but does anyone have some pointers in order to get shoulders to work better? I’ve tried several different combinations of weight painting, but none really came out right. I think it’s more of a modeling issue than an animation issue, because it isnt deforming right. If anyone knows something that might help, I’d like to hear it 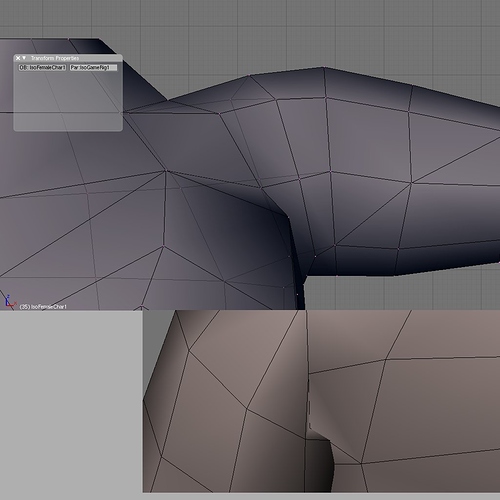 get rid of the edges in dividing the quads into triangle.seperate the 2 verts on top … Shoulders are always the worst thing to rig. My advice would be to try the corrective shape key add on.

Having good Topology helps alot for making trouble areas like shoulder flow smother. http://vimeo.com/10596662 good view of how shoulder topology can be. But like Modron said, Shape keys can do alot of benifit if still having issues.

I’m not really sure what shape keys are. I export my models to UDK and I don’t think UDK supports shape keys, that’s why I didn’t bother learning about them.

Basically the problem with my shoulder is when the arm is lowered. It crinkles into itself like a crushed soda can. I’m not sure if it is my rig or my model anymore.

Edit: Basically all of the problems are the armpit itself. I think the top of the shoulder is fine. I just don’t know how to get the inside of the armpit to smoothly move and not… screw up like it is

try adding rib bones that runs along his sides. that will lessen the influence of his arm over his armpit/rib area.

Well, he… is a she. I wonder if its the chest that is messing with things. I’m not sure how that would happen though.

I tried making it all quads, but if anything it made it worse. It is almost like it is ripping the verts at some angles.

I tried adding a couple rib bones on the side, but no luck there.

Maybe I’m looking at this the wrong way… What is the best base pose to model the character in? I have heard -many- different methods and have tried all that I can remember. I’ve done the generic T-Pose, with palms down and forward. I’ve modeled a character with their hands at their side. This model I did another method that is sort of an inbetween for animations. The character’s legs are slightly bent and the arms are also slightly bent forward, palms facing forward/at eachother.

I did this because I figured it was something like bending metal. If you have a straight piece of metal and you try to bend it into an L / 90 degrees, it will snap. If the metal is already at a 45 degree angle, it would be able to bend 45 degrees in either direction to get both straight and L poses without snapping. I know the logic isn’t quite the same, but it made sense in my head.

Point is, with all modeling types I run into a problem with the shoulders and wrists. The wrists I have a fix for, which involves separating them completely so the glove and forearm are not connected, which would allow for better rotation without any twisting. The shoulder… I still am not sure of. I know this is the modeling section, but maybe it could be my rig? 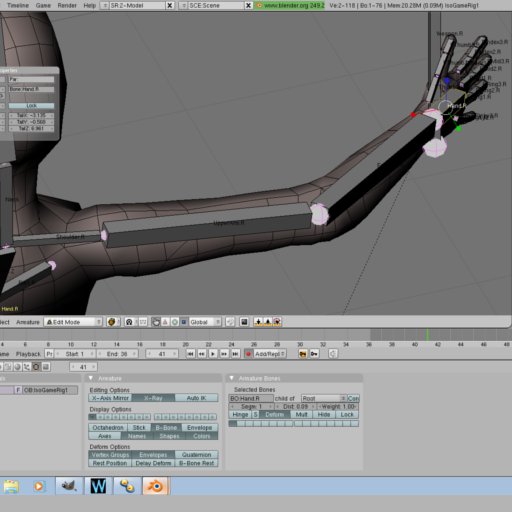 The Hand is not connected to the forearm. The IK chain goes from the hand to the forearm with a length of 2. The shoulder itself is not effected by the IK, but I can still move it manually. Perhaps my rig is why it is messing up…

I really appreciate the help so far. I have tried -many- times by myself to get things to work. Now and then I get something to work right, but the shoulder has always been something that has been wrong. Although it would not be very visible in my game, as it is a top-down style game… it would always be in my head, taunting me. Not to mention, I need to figure out how to make it work with the basic body, because when I add clothing and armor to my character, I will undoubtedly run into the same issue. I have to figure out how to fix it now, so I can continue with my project.

One other note. I have been told to use “pole targets”, but I have not been able to get them to work. I use blender 2.49b as it seems to be much more compatible with UDK than the newer versions, not to mention I much prefer the interface and flow of 2.49 than the 2.5+ versions. What I do is have a bone, in this case it is an elbow bone. It floats behind the character and has an IK chain that goes to the upper arm/bicep section with a chain length of 1. That way, when the hand IK moves the arm, the upper arm/elbow points at the elbow bone, to be like a normal human elbow. I’ve been told that is not a good way to do it. I have not been able to find information on pole targets though. Would they maybe help with this?

Any help would be appreciated

Once again, thanks for the help so far.