I was just checking out the new Ubuntu interface

From all my other Linux experiences this seems to be the most
easy to use - geared towards just users and not Linux geeks.

Interface design wise it just feels well done.
The greatest part is the package manager. Finding, installing, and
accessing the software through the main menu is a snap.

Funny to see where win7 got some inspiration from.

Thanks - I never got around to checking out other O/S apart from Windows, but your post has arosed my curiousity. I think after many years of ignorance, I will trial it out.

From a usability standpoint it is really good now.
The interface is well designed and consistent among all windows and dialogs.
The way how functions are grouped is logical and easy to access.

The desktop and x-windows system makes sense and is also besides visually pleasing
with those jiggle window effects also quite intuitive and effective.

The only issue of course is the software selection with all adobe products not
natively accessible for Ubuntu.

I feel this is the first Linux distribution which has the same consistency and focus
on ease of use as OS X.

It might not be the most complete or powerful OS - I dont know. I am not a Linux expert.
My judgment was more from a design and simple end user point.

True, Ubuntu is very slick and simple to use.
As a Bonus - Blender works better under Linux

The Software Center gives you almost anything you need (be sure to activate the Restricted Extras).
And if you need more “cool stuff” - then hunt for some extra repositories to add to your list of servers, then life suddenly become very smooth indeed.

I’ve been using Ubuntu for over 3 years now, and never looked back (8 years with Linux BEFORE that though…)

The updates are bi-weekly, and plenty of them too.
One difference you’ll notice between windows and Ubuntu, is that Ubuntu will still boot after 30 seconds (17 on some machines) even after 2 years of installing/removing 1000’s of programs, try that with Windows…and it’ll eventually grind to a halt.

good to know, dude. I’m used to Linux back from the early 2000, so I’ve seen a truly huge jump in GUI designs – first ones were very hackish and full of geekiness. Now Ubuntu is making such an excellent job in the user-level front that even designers begin the praise. Truly nice to know it clicked with you.

BTW, perhaps you’d like to know that Canonical is now investing in font design from a well-known firm:
http://www.daltonmaag.com/docs/FontDevelopment.pdf

And if you need more “cool stuff” - then hunt for some extra repositories to add to your list of servers, then life suddenly become very smooth indeed.

I’d recommend at least he adds Wine repository: latest Wine is able to run both Sculptris and ArtRage pretty much flawlessly. Which is impressive considering their beautiful and unusual interfaces, plus their amazing features.

I’ve been using Ubuntu for over 3 years now, and never looked back (8 years with Linux BEFORE that though…)
same for me. I was into Redhat, Debian and Fedora previously, learning my *nix way through the command-line. Now I leave the CLI just for development, not to mount devices or startup multimedia servers…

One difference you’ll notice between windows and Ubuntu, is that Ubuntu will still boot after 30 seconds (17 on some machines) even after 2 years of installing/removing 1000’s of programs, try that with Windows…and it’ll eventually grind to a halt.
so true… guess the problem is too much “me too” in Windows culture: most of the programs want to startup very fast, so they all get preloaded during Windows boot… :spin:

Years ago CLI was great, today I really do not want to touch it.
There is a difference in being able to poke into every hole and to
just wanting something to just run well without having a screw driver at hand.

I am still amazed …

I’d recommend at least he adds Wine repository: latest Wine is able to run both Sculptris and ArtRage pretty much flawlessly.

If you only knew how much I hate this program; I am most likely switching to windows 7 this month end mainly due to my in ability to use my PC for gaming wine is a complete PITA for me.

Ubuntu itself is a joy to use but not been able to play my games pisses me off. Wine is truely hit and miss.

Ubuntu is much better now.

I’d still only use it as a platform for doing some heavy modelling/ sculpting/ rendering though, for everything else I just can’t get use to the application equivalents, like the GIMP for example.

It would be nice to see Adobe bring it’s products to Linux, but I can’t see that happening.

Also, I believe with the porting of Steam to Mac OSX that it may be easier to now support a Linux version, that would be great news!

Yeah… I’ve been using and watching Ubuntu’s progress for around 2 years. It grew significantly usability/eye-candy wise. I heard rumours of plan on making it prettier in next release.

Funny thing is I had tried to use Linux around 6 years ago. Dunno which one I tried, but I got a really bad experience. It was ugly/blocky/confusing/geeky-looking/etc.

I tried Ubuntu live CD around 2 years ago when WindowsXP simply woudn’t startup after a sudden shutdown in middle of an update (the blue screen one). I wanted to just recover my important files, but when I saw that thing working from a CD I was like “oh… this is no Linux…”. That was when I realised the meaning of “Linux for human beings”. :eek: Today I have a totally customized Ubuntu with a lot of stuff I love in Mac OS and Wine for rare situations.

Maybe it’s getting to the point now where instead of getting Win7 64 bit, I just dual-boot and get Ubuntu 64 bit on a partition.

yes, works great: pretty flawlessly and as fluid as my go with it on Windows. Artrage is amazing too: a sort of “unbiased” painting program with a real physical feel of painting oil on canvas. Previous wine that came with Ubuntu 9.10 wasn’t able to run it, which is why I added the latest one from the official project repository:

If you only knew how much I hate this program; I am most likely switching to windows 7 this month end mainly due to my in ability to use my PC for gaming wine is a complete PITA for me.

I can’t care less for PC games, I’m a console guy as you can see from my avatar…

I’ve used Linux for around 5 years. I’ve seen quite a few changes since Ubuntu’s start up (Warty Warthog, I believe).

I used Ubuntu for around 2 years, moving onto Gentoo for around 2 years, and I’ve been using Arch for around a year now (along side Ubuntu on my desktop). My initial move to Gentoo was to learn the in’s and out’s, configuring everything myself and compiling my own custom kernel, tweaking all sorts of things. I ended up going full circle though, wanting something more basic, requiring less maintenance. Arch has been good to me in that regard, allowing some practical customization, but being more or less hassle-free in updating.

I’ve been impressed with the latest Ubuntu 10.04 as well. Nice and simple to get everything setup and everything worked. Sometimes Ubuntu jumps the gun on new software and creates a bit of a mess for those who have obscure hardware (PulseAudio, Grub 2, etc), but no issues this time around.

I also tried Fedora 13 on this desktop and was excited to give a RPM based distro a go (since I haven’t used one in spite of how common they are), but I had all sorts of trouble getting the nvidia driver to install, with no official documentation to go by and only a recommendation to pick another video card… So, after breaking X trying to install it on my own, I defaulted back to Ubuntu. (Just to note, the process of installing official nvidia drivers is incredibly simple even in Gentoo, which is known for making everything hard.) Oh well. Ubuntu has been nice.

I have to say, I’ve upgraded to Ubuntu 10.04 recently and it’s very impressive. It’s much better than previous Ubuntu versions.

However, I have had a few minor hardware issues with Ubuntu 10.04. For example, my speakers work fine but my headphones don’t. The headphones are not broken and they worked fine in Ubuntu 8.10 (but not in Ubuntu 10.04).

The other minor issue is that Ubuntu 10.04 can’t properly read the size of my hard drive (or maybe it’s a typo). I don’t think 128 TB hard drives even exist…

Other than these minor issues, the latest Ubuntu works like a dream. 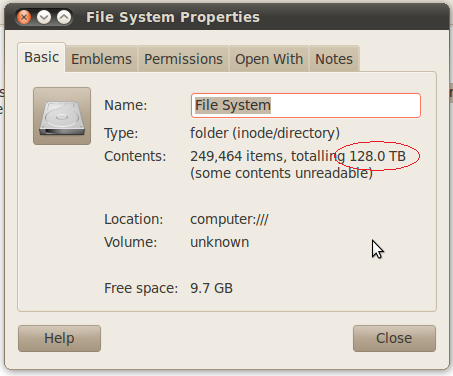 try it out - I do not want to promote Ubuntu, but after hearing so often that it runs Blender much faster and wanted to give it a try and was nicely surprised how finished it feels now.

It lost its geekness and became mass compatible. It feels much more like an interactive platform than a Linux running beneath it.

so do you like art rage? do you use the new version? It is a great competitor against sketchbookpro or paint from Coral.

It lost its geekness and became mass compatible. It feels much more like an interactive platform than a Linux running beneath it.

Does that mean that you can set things like resolution through a graphical interface now instead of needing to know how to use a console? How easy is it to also extract programs like builds from graphicall.org?

It’s pretty much the need for these two things that have mainly been preventing me from considering Ubuntu.

Ubuntu is really like OS X now. Usability is great.

I should give it a try but I cant really be bothered that much. Windows 7 works flawlessly for me and I got it to the point where everything is a click away. My biggest fear I guess is that Im gonna download it and install it and then come across some installs that required geekiness. For example windows 7 has homegroups which took few clicks to set up. Now my brother downstairs can view everything from pictures to movies that are on my computer. Im not sure how to go about that in Ubuntu? Maybe install Samba but what then? Also I like windows gloss theme. Every time I try Ubuntu everything looks like it was made using 16bit colour palette.