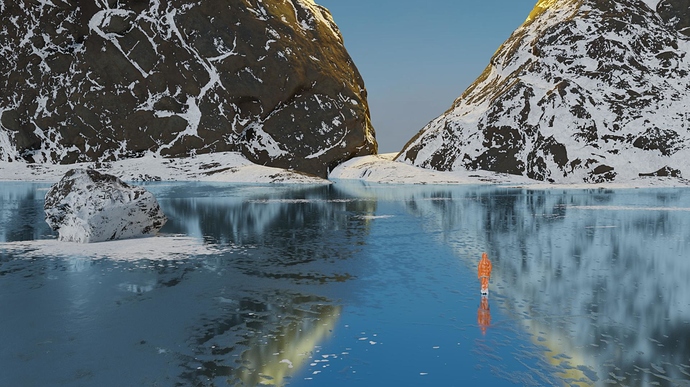 Critique would be appreciated

A few things stand out to me:

It’s interesting, but a little bizarre, ya what is the orange thing? It looks like someone made of fire with the underwear down around their ankles… haha. I also find it strange that there’s nothing in the gap just blue sky, no mountains in the distance etc. It makes you wonder why the lake hasn’t drained in the crack between the to different mountains. But I do like it, this is almost something I’d expect to see in a ski lodge on the wall. It sort of makes you feel surrounded and claustrophobic but in a nice way, like you cant leave, but why would you want to. Like being in a small ski lodge with hot chocolate and good friends. Personally, I would make a skier trekking across the ice in a bikini. Then add a UFO in the sky thats not totally apparent but unmistakable when pointed out… thats just me.

Never realized how wrong the gap between the mountains looks until you pointed it out and now it’s all I see, can’t believe I missed that lol

I was going for someone in a high visibility winter coat just looking at the landscape with the choice of orange. I wanted to keep the figure small but I could never get to look quite right. I tried giving him a more neutral color at some point but it made it blend in too much, perhaps a middle ground or a different color would have worked out better. I didn’t try having him be in motion, that probably would have helped as well.