Hello,
I went through several finger+hand tuts these days, ( http://www.blender.org/documentation/htmlI/x7613.html , http://blender.active-domains.com/x/x5638.html , http://en.wikibooks.org/wiki/Blender_3D:_Noob_to_Pro/Printable_Version , aso ) but can’t find the needed solution for controling the fingers of a hand…
Is there any possibility to have the fingertips tracking an object?
For example:

Just wonder… Of course, i can still animate on a one-finger-after-the-other basis. It would juszte be cool to get a “simple” way to do it.

I like the scale bone version for controlling the bending of a finger. Basically you create a IK Chain for your fingers with the IK target as a bone at the tip (IndexIK.L). Then you create a bone from the base of your ik chain to the root of your ik target bone (IndexBender.L) and connect the ik target bone to the just created bone. When you now scale this bone the finger bends.
Here is a image that might explain it better. Not sure if this is what you want but I find it gives you pretty good control with just one bone. 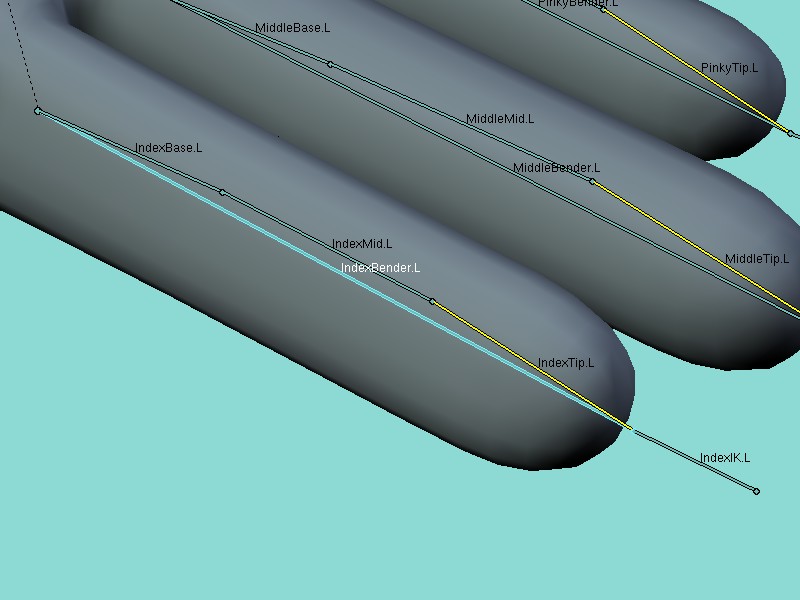 :yes: This is a great approach!
I was trying this:

but it is rather cluncky and doesn’t use the IK as it should (finger tips will move… but want force the whole fingers to follow the gesture - other issue is a inexistant control for individual finger moves…).
Yours looks more promising. Guess that with few handdles these fingers might even play piano!

EDIT: Of course, in my example there could be some extra finger controls made parent to that palm control, aso…

Huu-Hooo!
I get some strange behaviours here…
First i have to get it all done the right way. If you’re still around and willing, correct me.
I did this:

I will quickly make another blend file with a single cylinder and tell you then.

And Blend file (in case):
http://www.visionnart.ch/public/bending.blend
Actually IKtarget.004 is connected with ctrl-P and EfromBone should be sticked to Bone as it is Shift-E from Bone’s root… (?)

Ok here is the setup in detail. See the pics for references. The finger is only parented to the hand base but not connected.
The Hierarchy is as follows:

IndexTip.L has a IK Constraint applied with Chainlen = 3 and IndexIK.L as the target of the constraint.

That should be it.

To control if the IK Chain is working simply unconnect the IndexIK.L and move it in pose mode and see if the finger follows. Once it does connect it to IndexBender.L and start scaling. 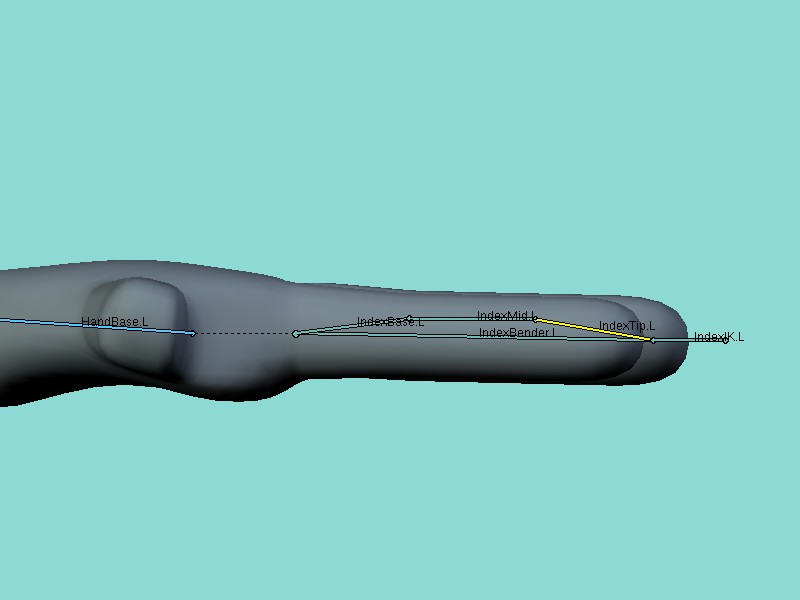 Download the ManCandy rig and look at it, it has “scaled” finger controls.

Finnaly i got it and reallyzed that the Bender had to be placed on the right side of the finger chain for roll placed the base of the bender bone right after the base joint.

But if one for example wants a move of the indexfinger like the T-3000 in Terminator at the metallplant did for saying no, no you cant win against me to Terminator alias the current Governeur of California. Has he to make new bones therefore?

I am not that good in that domain… but, probably, you still could add some more control bones and hang whole bunch of constraints on them…
Just my guess…
Well, sometimes the concerned scene are so short that one can just key the specific gestures manually.