IK Octopus Tentacle twisting arm instead of flexing both directions

Here is a gallery with all the images in my post for convenience: http://imgur.com/a/PVsKF

The majority of this character will be swimming, so IK will be the primary way I plan to animate him, as it is the fastest and most intuitive. The character will likely have to hold specific objects and do manipulation with their tentacles so FK is an option that is also part of the rig.

While a pose where the legs bent similarly to the original sculpt he looked just fine http://i.imgur.com/v79actI.png , but when I tried to do one with the curve going around the outside it’s a total mess. http://i.imgur.com/IbvfcKc.png The tops of his legs have splotches, the bottom has hearts for suction cups- the entire leg is twisted around http://i.imgur.com/MT1E0bG.png Not being able to do these basic poses limits my rig to half of what it should be able to do via IK.

I would like this rig to be able to do a full range of swimming motion which it falsely appeared to do when it was just the rig. I understand the problem, the rig arm rotates to face the pole target now instead of FLEXING in the direction of the pole target, which doesn’t work due the arm twisting. For a character with an elbow that would make sense, however I am not sure how to accomplish what I want instead of this. I don’t know how to rig it to do what I was originally expecting.

Here is how I have my IK set up http://i.imgur.com/8EjdaOO.png

If I prevent it from rotating somehow the pole target will simply not work at all.

• Perhaps there’s some way I can keep the skin from following the z rotation of the bone?
• Perhaps there’s some way I can get the leg bones to move as IK but have it flex toward a target rather than rotate?
(In either case I’d try to make a switch over influence so I could rotate in the future if needed.
• Maybe the pole target can influence the rotation but maybe I can use some other control to control what direction the leg flexes?
• Other IK relevant suggestions?

I’m not sure how to accomplish getting this rig to work properly. Please help?

Try this rig out. It is IK and FK switchable and also allows stretch controls that work on both the FK and IK controls. This is a single tentacle, but is this what you are wishing to create? If not, what are your other requirements?

The IK control does not use a pole target. (By far easier to control, especially with multi limbed creatures.) Change the angle of the tentacle by rotating the IK.CTRL. Also, the stretchy controls will work with this control set. To switch from IK to FK, the IK control must be selected. There is a custom property slider in the N panel that will switch between the two.

I am also using the bone layer management tool. You will not be able to see the custom bone layer information without that addon. ( If I recall correctly, it’s called UI management addon) I am including a screenshot so you can see the bones that are on each layer. 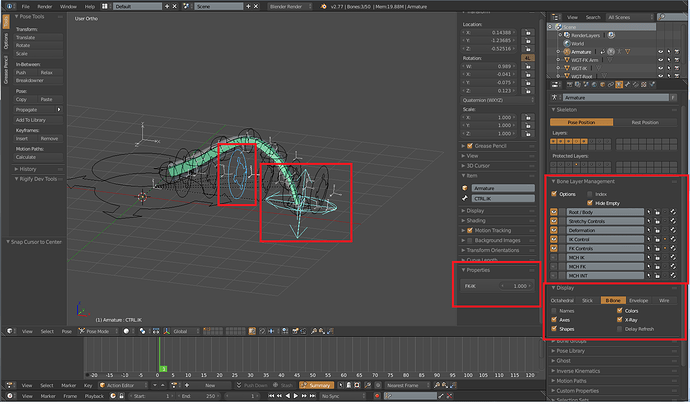 Thank you for sharing this rig. I’m trying to figure it out now and I’ve run into a few walls with it, it’s a little above my current experience level. It’s way out of my ability to create, but if I can get it to work with my model I’d be quite happy with it I think.

I’m having trouble positioning it to match the model, I figure once I position it, if I duplicate it I can rotate it to match all the others. http://i.imgur.com/EW5j640.png

I think I have the FK matched but the IK just goes crazy no matter what bone layer I move to try to match the position. I am not sure how to position it in Edit mode to match the tentacle so I can skin it, and have the default position when I hit ctrl R or ctrl G go back to the original model position. I’ve tried moving all the layers but something isn’t working.

Which bone layers should I match to the original tentacle in edit mode so that I can properly weight it?

It looks like the default tentacle shape is rigged to the bones “Def-arm.001” through “Def-arm.006” I’m not sure how to use automatic weighting to only bind to these bones- that’s more of a general question I haven’t figured out yet as I’m still learning. In the past even if I only have that layer showing and those bones selected it still automatically weighted to every bone that was a part of the rig.

It may be better if you supply a blend with your current rig. That way, some changes could be made to add some functionality to that, rather the reverse engineering the one I posted.

Including the mesh would help, but is not required. A stand in would be helpful, if you can make a simple mesh to the approximate size as the one you are rigging. You might be able to find an octopus on blendswap.com if you are not comfortable sharing your own mesh.

Any thoughts on your requirements for the “hands”? If you’d like the hands to pick things up, maybe a “thumb” or just a simple bone chain at the end of the limb to curl around objects.

I think it should be okay sharing here, though working with the rig I made via a tutorial, I’ve found it doesn’t work well for additional reasons. The IK is limited, and using the FK results in the mesh being folded and flattened, not moving like a tubular octopus tentacle. At this point it feels like the more I try to fix it the more I find broken with it XD I hope this is is normal? At least in learning rigging? Here is my model: https://dl.dropboxusercontent.com/u/23808236/Inky_079.blend And here is the spec texture I’ve been using to view him https://dl.dropboxusercontent.com/u/23808236/InkyGreyBody_Specularity.png (the regular texture is dark purple and black- this has much bigger contrast and is easier to see rigging etc)

As for the hands, this character has a mallet that he sometimes uses. Example 1: http://66.media.tumblr.com/3f0bb03f8b83c2de8ab95a5e332fa11d/tumblr_inline_o77kqa6MKK1qgvkbr_500.gif Example 2. http://i.imgur.com/gr6RCpY.gif It wouldn’t need the crazy curls, heck I’d be happy if both tentacles could hold on and move together without looking like a horror show (it’s hard to have two hands hold on to an object and move in sync.)

Basically he’s a character of mine that I have a lot of ideas for and I’m hoping to make a strong rig so that I can do a lot of animation practice with him.

I added custom shapes for the FK/IK arms. Not all the bone layers are showing, nor are all the object layers- but they are accessible in the bone and main panel as with any normal rig.

I only had time to skim through this thread but perhaps try the spline spine set up in my signature. It’s a very simple Ik Spline set up but I would recommend adding a top layer of FK controls too and get the best of both worlds. I left written description in the file.
It stretches and twists and is very robust.

@ Toka, Hang in there. I’ll keep you, and all affected, in my thoughts.

Sorry, I ran out of time tonight. I did some work to the rig but I did not have time to do a write up for the changes. I’ll try again after work tomorrow.

I only had time to skim through this thread but perhaps try the spline spine set up in my signature. It’s a very simple Ik Spline set up but I would recommend adding a top layer of FK controls too and get the best of both worlds. I left written description in the file.
It stretches and twists and is very robust.

Thank you for the link Toka. For me this rig is just as much learning to become a better 3D artist (I’m hoping he will be my main rig to practice animating with) so even if this isn’t the solution for this rig, I want to learn and get better as the failings with this rig have shown me that my skills are lacking!

I am sorry for what you are going through in the UK right now. It sounds really difficult, and it is probably trying to keep your spirits up. On my blog I’ve saved a collection of things that help cheer me up when I’m having a rough time, and they help me feel a bit hopeful again. Maybe some of them might help? http://floweryfanclub.tumblr.com/HOPE I don’t know if you like Pokemon, but this silly little dance video of them just about always picks me up a little higher than I was before https://www.youtube.com/watch?v=nabGwUfVIkQ .

Sorry, I ran out of time tonight. I did some work to the rig but I did not have time to do a write up for the changes. I’ll try again after work tomorrow.

I am thankful for whatever help you may be able to give. My current rig doesn’t deform well at all and I’m not quite sure the direction to go so that it’s usable for future animation. Ha I had no idea rigging a tentacled character would be so different when I first started. Currently I’m focusing on learning how to rig the face for lipsync so no need to apologize, you’re not holding me back at all.

Sorry for the delay. Holiday weekend here and lots of things going on.

The main thing causing the bad deformations in your rig is , every bone in the rig is set to deform. You have FK and IK legs bones fighting for control over the mesh. I started recording how I set up the my rig with a dedicated set of deformation bones. After completing the recording, I decided that I stupidly complicated the matter.

So back to the drawing board. I hope to record a simple setup that you can use. The simple setup should be expandable to allow any advanced feature that you want to add. Unfortunately,t will have to wait until after work hours.

Here is a quick tutorial on how to set up an FK/IK switchable tentacle rig. https://www.youtube.com/watch?v=r-G3ocQ5cjg

I hope this helps. I will be posting the video of the advanced rig in the next day or two. This simpler setup should get you started.

Advanced rig tutorial should be up:

This is slightly different then the rig I posted above. The big difference is a change in the FK rig. I am not using Action Constraints for this rig. I’ve found a simpler and easier solution.

I’m so sorry it has taken me so long to reply! I missed the notification I guess and never knew you replied! I’m going to go over these, and I’ll let you know how it goes.

Thank you so much for taking so much time and going so far as to make it into a tutorial so that I not only have a rig but I can understand and learn what I’m doing making it. this is going to be really cool. : 3