I'm having huge problems with this logo/text object project.

Hey, I’m new to blender. I’m a UX/Graphic designer professionally but recently wanted to start getting into Game and 3D stuff.

I figured that it might be kind of nice to use Blender to make a 3D logo. I’m having a bugger of a time though.

I took a font and put it in Photoshop which I am most comfortable with. I arranged the text together in a composition. Roughly what I thought I’d like to do. My plan was to take some text, extrude it, and then bend it around a central point. Kind of like the old japanese Voltron logo: I then took the PNG, took it to Illustrator and Image Traced it a vector format so that I could then export it as an SVG to Blender.

When I imported it into blender it came out look pretty gross. The image trace left a lot to be desired. It didn’t give it nice super minimalist vector like the original font. Instead it was super choppy. I then converted it from a curve into a mesh and then extruded it and then spent something like 6 hours cleaning up the mesh until I had a nice clean mesh. I then chopped it up sideways using the bisect tool to give it places to curve when I applied Simple Deform Bend, and then used AutoSmooth to get rid of the weird triangles in post render. 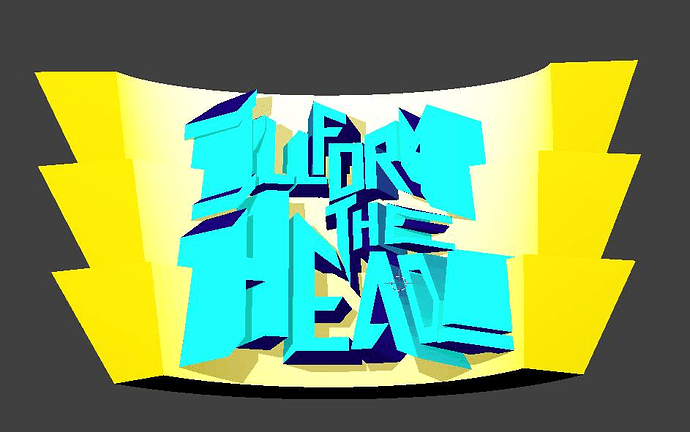 Eeehhh… not exactly what I wanted. I decided I need to change the font. The back (which I built from primitives) came out fine but the text was too hard to read.

Okay so I’m going to try again, and this time I want things to look cleaner, so I don’t have to spend another 7 hours fixing the mesh. Also because in the process of fixing the mesh I kind of messhed up the letters, sort of squished them around too much and stuff.

So I decide to try the Text Object tool. I write out the words in a different font, and then try extruding it using solidify. This looks good, but I can’t curve a text object, so I convert it into a curve. Curve looks awful, all wonky, just doesn’t work. The font I was using apparently had some overlapping points or something. So looks like text tool is a no go? While it is text it has probably the cleanest set of points etc, I would assume exactly like that of the font itself, but in the process of converting over to curves it all goes wrong. Converting it to mesh doesn’t work either, and waiting till after conversion to extrude it also doesn’t work. Converting this text to curves just won’t work. Additionally, I can’t seem to adjust the composition of the individual letters using the text editor, like I could in Photoshop.

Okay third time is the charm right? I decided to start over with the SVG. Instead of doing my compositing in PS, I’ll just do it properly as a vector in Illustrator. I write out my text, and I break it apart and unionize it using Pathfinder and then I save it as an SVG.

I import it as an SVG to Blender. And there it is! It looks pretty decent as a curve! I extrude it, and no problems. But if I then convert it to a mesh (which I have to do because the SVG imports each of the letters as a separate curve, and in order to apply the simple deform mod to them as a group, I have to apply a boolean unite mod, but that would require them to be meshes in order to do that ) the topology gets all messed up again. This time it isn’t as bad as when I converted from the first SVG or when I converted it from a text object. But it still has tons and tons of extraneous vertices and lines. I do not want to spend a bunch of time painstakingly cleaning it up. Is there no way I can clean this up? I don’t know much about the modifiers. I heard about remesh. Or like something like that? There’s stuff to recalculate the normals or the mesh or something? Anything that can make this stuff more regular and easier to deal with?

Any advice on how to do this in an easier fashion? (other than hand box modeling every single letter)

Also is this just the sort of thing that Blender isn’t very good at? Should I be using some other program like C4D or 3Ds Max? I would prefer to stick to Blender since it’s what I bought my tutorials on and it also seems to be a really great all around tool, but these text problems are driving me up the wall.

Didn’t read all of that, sorry.

But yes, it’s about the deformation and a needed structure that can deform. The import/export and conversions also require some careful steps. A .svg imports as curves which might not look good if those weren’t defined as paths and combined properly, and conversion from curves to mesh require adjustments in resolution before conversion and clean up after conversion.

How to curve SVG text object for 3D printing?

I have a vector text image (“York”) that I would like to 3D print to use as a bicycle badge (a small metal piece that wraps around the front of the head tube.) I saved the vector text image as an SVG, imported it into Blender 2.73, extruded and...

Also this might be helpful for a graphics designer: if you can make Blender viewport previews to show what you want as end result, you don’t actually need to use a render engine to calculate all that again much slower. Could hide interface stuff and things that don’t render with 3D view properties -> display: only render, maybe also enable world background, move to camera view and then use render menu -> opengl render image/animation to capture what is shown. The same menu has options submenu for opengl rendering.

Note that viewport behaviour depends on the active render engine. Blender render which is the default has had better viewport previews but Cycles has improvements in 2.78 which will be released shortly.