I am attempting to have a floating graphic in my 3D scene of a .PNG picture with three people. In the .PNG, the background is all dead Alpha space. My ultimate goal is to import the graphic into my Blender 3D scene and have the Alpha space from the .PNG be invisible in Blender, as well.

I’ve tried importing the .PNG as a plane (I enabled the “Import Image as Plane” add-on) but the Alpha channel came through on the plane as just black.

I then tried something different. I made a .SVG out of the outline of the three people in Gimp, and then imported that .SVG into Blender. In Blender, I converted that .SVG outline into a Mesh (Alt +C) and filled the outline with Faces (Alt + F). Then, I tried to use UV mapping to place the .PNG onto the new Mesh. But…that failed (I’m terrible with UV mapping).

So, can somebody please tell me how to import an image from .PNG source and not have its Alpha channel be visible? 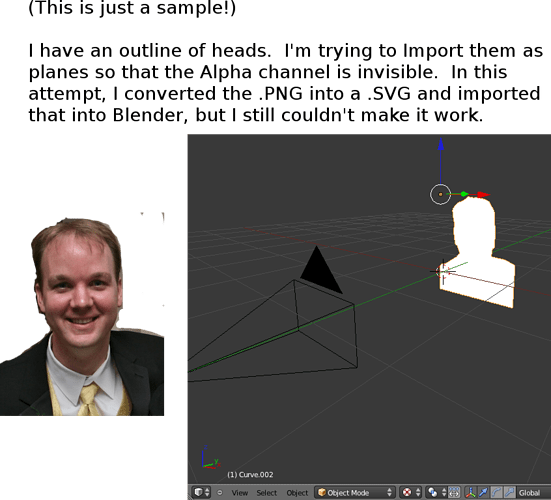 Solved it myself. For anybody who comes by this in the future, the way I personally achieved this was through the second method described above:

I’m sure there’s a simpler way than this to achieve it, but, if not, it worked for me in this case.

If anybody knows of a simpler way, please share it.

doesn’t turning on premultiply and checking use alpha in textures make the png transparent?

doesn’t turning on premultiply and checking use alpha in textures make the png transparent?

For me, the Alpha area showed up as white. Just to make sure we’re talking about the same thing, you meant:

Right? If this is what you meant, then it did not work for me: the Alpha showed up as white.

Argh! That looks PERFECT! Would’ve saved me a lot of time.

For anybody reading this in the future, just follow that link’s instructions for rendering Alpha channels of .PNG invisible. Much, MUCH faster than my method.