In Desert and Wilderness

Hi guys, this is my last project.

Staś and Nel are characters from the prose of Henryk Sienkiewicz, from the novel “In Desert and Wilderness”. My picture presents an alternative story that happens after a dozen or so years since the events in the book.
Nelly and Stanisław Tarkowski are in Africa on a mission commissioned by the Polish government, perhaps by Marshal Piłsudski himself. Mbewe, son of Kali, chief of the village, accompanies them. The expedition is carried out using Ursus, model K-20 “KING”.

Work strongly inspired by the works of Jakub Różalski.
Character models from Makehuman. 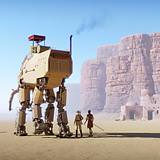 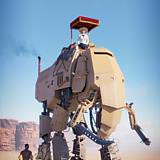 Love it.
Didn’t read this novel but it sure looks inspired from a Star Wars walker, yet in this context it’s quite interesting.

hmmm … Sienkiewicz wrote “In Desert and Wilderness” in 1911. In Poland, it is a school reading, everyone read it as a kid (almost everyone).

I have not expected Sienkiewicz here

Nice surprise and I really like the Elephant and the Dog. The characters are a little “stiff” though.

Agree on the stiffness of the characters.
Something that helps bring motion to a character on a still image is to break balance in the pose. My assumption as to why it works is that if a character looks like he wouldn’t stand in its pose without falling, it forces your brain to imagine a motion that would keep him from falling, and so the character appears like he’s moving.
Take this walking character for instance:

Hathor Medium : Digital Painting Software : Krita My entry for this month's Character Design Challenge on Facebook, on the theme of Egyptian Gods (I just couldn't resist such a theme lol) Hathor is...


She has one foot up and looks unbalanced.

Your characters all have both feet on the ground (or 4 legs for the dog) and are perfectly balanced. So your brain can easily imagine them standing like this. That’s the main problem I think.

thanks again,
You’re right about stiffness. I will not change it, but I will remember it for the future. It’s one of those things that you notice when someone pokes it to you.

too bad because I recommended your work for the top row but these character poses are the only reason why the admins didn’t consider it.

What can I do? no time

what you can do if you don’t want to work on it anymore is to add a few tags on it so when the gallery plugin is finished we can find this piece in, I don’t know… #sci-fi? #mecha? What theme is this artwork about?