For this scene I had in mind to create a composition of architecture and nature.
So I decided to create a garden, but not as usual outside of the house, but inside, like those japanese gardens which are surrounded by the house.
And this is what I came up with at the end. 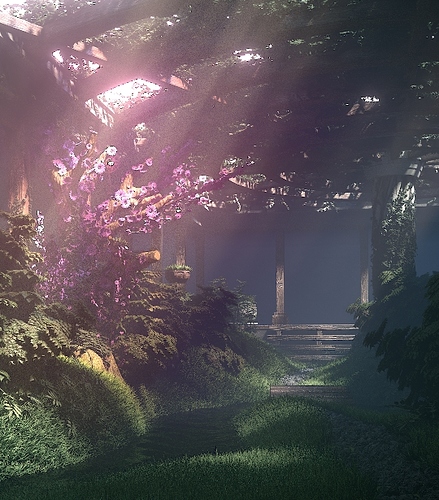 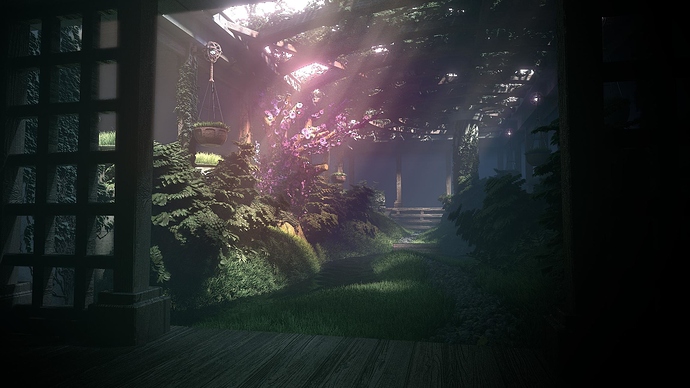 In general, I prefer this overgrown look because it shows the nature as a dominant factor.
Nature is for me something hard to create as for everyone else, but I love this challenge, and it always works as a way to create a certain level of detail in the scene.

As a focal point I was thinking of a tree, on which the only flowers in the garden grows. I am not sure though if this kind of tree exists, but I like the way it looks and works for this scene and I am pretty sure though that I’ve seen this kind of tree already. Besides this, the tree draws the attention to it by making use of the sunray which are literally presenting the tree.

The other focal point is the pillar, which represents the presence of architecture in this scene. To create the pillar I used the screw modifier to create this kind of structure. The pillar holds the roof which is made out of wooden bars and ivy which also draws the attention to the pillar.

At the end it was an interesting project for some few days.
It took me 30 Hours to render, which is something why I hate nature xD It always increases rendertime and its almost impossible to bake it or something like this to decrease it again.

I used 900 samples and a separate layer for the sunrays.

And here is the Speedart of my project

This looks awesome keep the good job up

All the vegetation desperately needs some translucency and less uniformity.

Right now all the leaves look like they are made from cardboard.

I will remember this for later projects.