Hello!
I noticed that the behavior of the Loop cut tool (Ctrl+R) has changed drastically in 2.66 with respect to previous versions.
As you may have noticed, the new behavior doesn’t confirm the action as you release the mouse button after inserting a loop cut. Instead it continues to slide the loop until you click again to actually confirm its position. Compared to the old behavior this is very annoying. Is there a way to revert to the old behavior where the position of the loop cut was adjusted by holding down the mouse button and dragging, and then confirmed by just releasing the mouse button? I still can’t figure out if the new behavior is a new feature or a bug - it’s much, much clumsier.

Also, I noticed that the Insert loop cut tool now has options visible in the toolbar (or F6) just after using it, as many other tools do, but all the options are greyed out and unavailable. Is this an expected behavior or a bug? 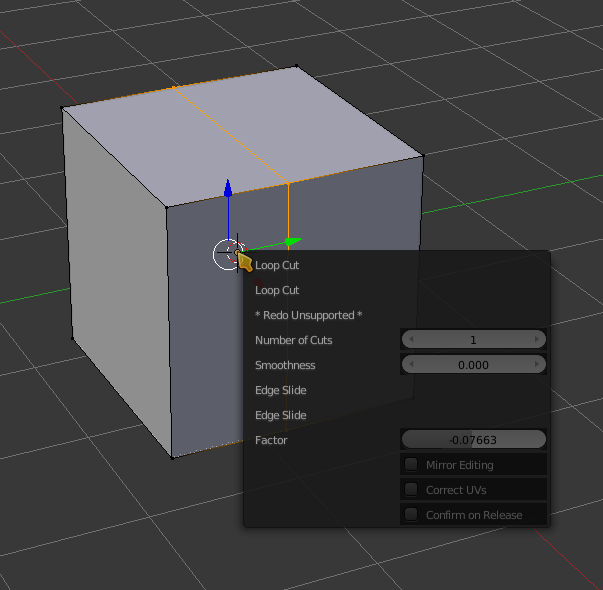 I genuinely dislike the way it works now and really hope there’s a way to fix this.

The only difference is that if you press [Right-Click] instead of the second [Left-Click] in the case of a single loop cut, Blender 2.49b cancels the whole operation while Blender 2.66 sets the loop cut in the middle. (I prefer this way.)

The only difference is that if you press [Right-Click] instead of the second [Left-Click] in the case of a single loop cut, Blender 2.49b cancels the whole operation while Blender 2.66 sets the loop cut in the middle

IIRC, middle click in blender 2.49 positioned the cut in the middle.

The only thing I can think of how that could’ve worked as described in the starting post is that the option “release confirms” is on. You can turn that on in the user preferences -> editing. That’s not so useful though, because release confirms everything after that.
Also, there’s also ‘even’ and ‘flip’ options for the loop cut which you can use before confirming the cut. Even makes the cut follow the edge which it slides against, and with flip you can tell it to use the other of the two.