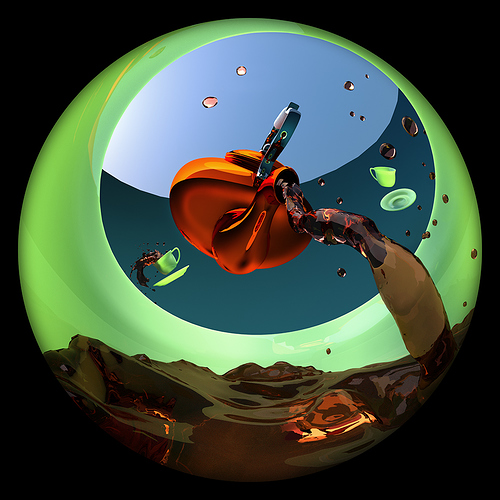 This is meant to be a surreal view from within a teacup. Rendered in cycles, 800 samples. Post processing was done in Photoshop, and consisted mostly of noise reduction.

I like your idea and I guess you did not use cycles render, did you ？

Thanks, everybody. Blackorange, I did use Cycles to render this.

nice render. What format is that image in? I’ve never seen an image load that slowly; not since the 90’s anyway. I’m working with 100Mbps here so just wondering. I like the idea a lot.

It’s a 3MB png file. I’ll see about replacing it.

Maybe it was just some a momentary issue. Loaded mine just now. that shouldn’t be an issue. jpg loads fastest for online stuff though. Maybe it was on my side.

It could have been my hosting site, since I was linking the image directly from there. I replaced it with a smaller filesize .jpg and uploaded it as an attachment here.

I love the glossiness on everything. I bet it took a lot to resist the urge to use the Utah Teapot when you used a teapot. :eyebrowlift:

@samgj: You know, I’d honestly never heard of it until just now! Funny – after looking it up, I realize that I’ve seen it before over and over but never knew of its significance. This teakettle and these tea cup/saucer models were some of the first things I modeled in Blender while familiarizing myself with the software.

Thanks for your comment! I’ll keep an eye out for it from now on.

Very imaginative, I really enjoy this image. Has a Hockney feel to it.

This is a very nice perspective, I like it a lot!