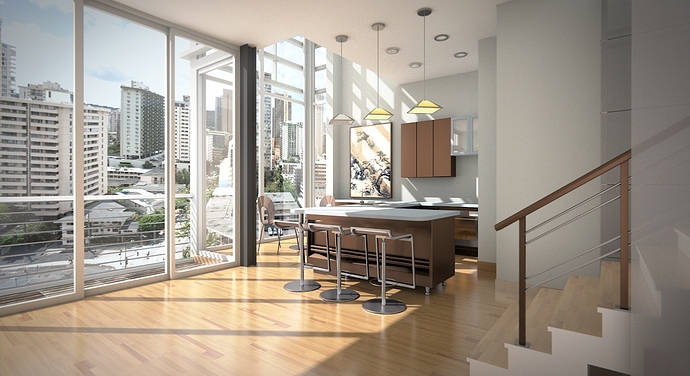 Nice one! 2 hours on which hardware? CPU or GPU?

I really like the way you lit the scene. Wood shaders could be improved imho, and the perspective of the background picture is off.

Nice one! 2 hours on which hardware? CPU or GPU?

I really like the way you lit the scene. Wood shaders could be improved imho, and the perspective of the background picture is off.

Agree.
And what’s the renderresolution ?

Thanks guys for the kind remarks

@marcoG_ita yes the perspective is off a bit. I realized that & will be posting the update soon. Thank u very much for pointing it out… It’s CPU rendering

Also check your levels before you post an image. Really nice interior, keep it comming the modeling and lighting is good but i can totally tell that the city outside is a textured plane the perspective is completely off but good work.

you could play with the orientation of the outside image plane to probably achieve the right perspective (twist and bend the plane)…and maybe also play with the camera angle a bit too. Nice work to:)

heres an update with the background adjusted… Also check your levels before you post an image.

I don’t get this, yours in underexposed, the original one is way better balanced

@milan981 - I’m with marcoG_ita on this, levels are fine in anthropoid’s pictures, your pic is to dark.

Are there glass in all the windows? isn’t that usually a problem with Cycles to be light good through glass?

Most surfaces are smooth, a little bump on the floor and maybe some light texture/bump on walls and other surfaces could spice it up a little.
Put a few items on the table, move/rotate one of the chair just a little so it looks like there is people presence.
Put some furniture or carpet or something on the left bottom, it feels a little empty now.

@marcoG_ita: sure if you like it that way, I always liked to see the well contrasted images, maybe that was my way of working, so that’s the reason why I (like you said) little underexposed image, because the colours on the image was washed out.

@DerekG1080 thank you so much… your advice really helped … although i had set the mapping (of the BG texture) to UV but i realized that the image was changing when i rotated the plane as if it was camera mapped on the plane … any ideas why ??? ideally it should just stick to the plane right ??

One thing that probably no one has noticed or pointed out is that one of the lamps is not working … it was not a conscious decision (although I like it that way now) … it has the same material as that of the others but it just simply refuses to light up (although it is lit up in the interactive viewport renders) … Bug??? i’ve no clue …

thanks guys for your support

The scene with the corrected background perspective is rather nice, looks kinda like what you might see in a home magazine or something (seriously, ever since I got into 3D art, I trust NOTHING I see in adverts) oh, and for carpet, im pretty sure there is some way you can use child objects to cut down on the strain on your computer, and with things like carpet it should still be pretty convincing.

Really nice work. I like making interiors myself. The only things I would point out is the hanging light fixtures could use some texture work. They look “sketched” to me. I think I downloaded those stools from 3D warehouse too. But I modified them as the base seems a little unrealistic. Just my 2 cents.

The background will always feel like a textured image plane unless it’s directly facing the camera. So I would suggest having the plane directly face the camera and just be photographed from the proper angle