I have been using Blender now for less than two weeks, but already I have read a lot of the help files and other documentation, as well as browsed numerous tuts. So, I’ve spent a lot of time on Blender already (I am retired), reading and experimenting, and I have not yet found the answer to a few questions I have. I’ll wait on other ones I have, and start with a really simple one. I fear I know the answer already, but would like some feedback to confirm.

Suppose I have a scene with oodles (a technical term) of objects in it (I know about using layers to help divide them up into distinct visible collections; maybe other good reasons to have also, but don’t yet know). My question is really a two-parter:

A couple of years ago I worked with 3DSMax for about a year, and I loved it. I see a bunch of complaining about the Blender interface on these forums. Gee, it’s just an interface folks! Really very different from Max, but I think it’s no better or worse than any other incredibly robust program. Just memorize the stuff, and get on with making things! Life’s way too long to spend time unhappy.

Just an addition/short cut to Ubuntuist’s first point: Move your mouse into a 3D window and press SHIFT-F9 for the outliner. Go back to 3D view by pressing SHIFT-F5.

Also to add to question 1, if in the 3d window you have objects on top of each other, hold down the alt button while right clicking, you get a list of objects under the cursor to select from.

All useful answers. Thanks, everyone! It does take awhile to learn all of the mouse-keyboard combinations. I know about the “HotKey and MouseAction Reference” under the Help menu, but still. Yeah, Ubuntuist, I think the limit is probably enough also; I was just curious.

Suppose I have a scene with oodles (a technical term) of objects in it (I know about using layers to help divide them up into distinct visible collections; maybe other good reasons to have also, but don’t yet know). My question is really a two-parter:

My standard screen setup has the view split into 7 windows :

You can quickly zoom any window to full screen by hovering the mouse in it and pressing SH-SPACEBAR.

There are a bunch of other neat new featuers in CVS, if you want to preview/ test them.

You can download a Windows version from here http://www.zoo-logique.org/3D.Blender/index.php3?zoo=com

I’ve been using those builds for months with very few problems. You can have it installed in the same directory or a separate directory if you wish, and have it and the official current version both available.

You can read about new features / bug fixes in the CVS commit logs here :

The most current docs are those in the “Summer of Documentation”, done this past summer, they cover modelling, animation, materials, lightiing. The link is on the main page of the Wiki and also in my signature.

If you’re interested in character animation, I have links to the best rigs in my “Best of Blender” thread (link in my sig). 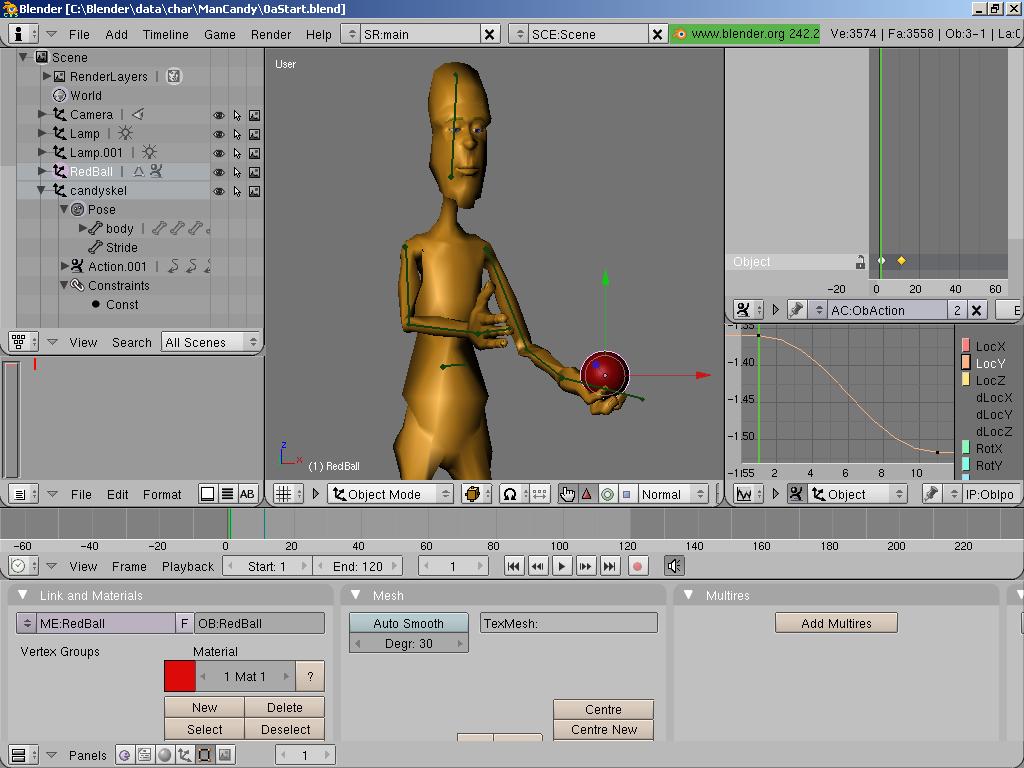 Wow, Mike! Talk about getting more than I asked for. Thanks for the added, but useful info. I appreciate that. Yeah, I know about the SoD, but only slightly. I had already downloaded and started reading Ryan Dale’s fantastic “Introduction to Character Animation”. After only a few pages, it is obvious it is clearly well done. But, I didn’t know aboout all the other docs available your link reveals. Also, I’ll definitely find your ideas about grouping and using library objects handy related to some ideas I have in mind to do (well, someday, after I tame this new-to-me beast).