Is there such thing as a '3D UV map' for 3D procedural textures?

Imagine a ‘UV cage’ that could distort 3D procedural textures - so your 3D chequerboard that runs through the volume of your model could be made to curve and warp throughout in places you wanted it to by manipulating the UV cage.

There has been several times I wished I could do this. Has anyone written a plugin to be able to?

3d UV map can be helpful in making 3d virtual tours of textures. Such kind of models can be used by property agents to give their customers well designed idea about the space or property can look like. You can also see some good example at the site of Mantis3d

wait 3D UV is for Surface mapping !
but you can also have 3D volume procedural texture!

so UV is not inside it is on the surface

Exactly my point, Ricky. Let me rephrase my question; can you distort volumetric 3 dimensional procedural textures in all 3 dimensions? All the demos I found using the UVW addon are only using 2d textures. Imagine a 3d volumetric chequerboard (texture coordinate = ‘object’) and the cubes of the chequerboard can be made wobbly, distorted, in all 3 directions.

This is why you would need a cubic cage to give the effect of UVs but in 3 dimensions.

Thats what I said, its render engine thing to have different projection modes, advanced render engines have triplanar etc. They dont use uvw maps at all.

You can attenuate one volumetric texture with another. In this example I have used the gradient texture to drive the size of a checker texture - changing the size of the checker through the volume of the cube. 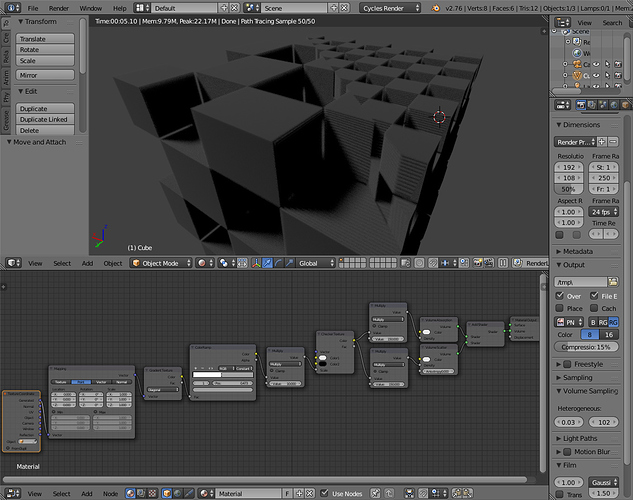 But I only used these values to make the checker look solid for the purposes of illustration.

Yes I was aware that you can distort on 3D texture with another… but with some kind of distortion cage that acts like a 3D version of UVs, it’d give me finer manual control for things like rock strata that have custom bends in them as if force from below has distorted it.

If no such thing exists, maybe I’ll put a suggestion forward! Thanks.

Every object has it’s own ‘Generated’ coordinates, and these are 3D. There are other coordinate systems that are also 3D. Basically they are composed of U, V and W.

Most procedural textures use the uvw ( bitmap textures and the brick texture ignore the W coordinate, so they only work in 2D space).

it’s also possible to create new textures based on 3D coordinates… and most of the functions available in cycles nodes are designed to work with the 3d space.

seen some of these 3D textures
but not easy to get something nice looking !
and no control of what and where things happen inside the volume

you can look into it yourself… the file is in the 7th post of that thread.

The OP used two UVmaps to create aN UVW map. Then he uses the distance of any point being shaded to the point(0.5,0.5,0.5) connected to a ramp node that will color the object parts.

Y’know, following this and reading some of the linked threads shows me how much I have to learn. I came to Blender from C4D, and whilst C4D has a decent material system, and node based was alien to me, I’m getting there, but 3D texturing is a whole new ball game to me. I considered normal maps 3D textures until I saw some of this stuff.

Kudos to all who get it!

Y’know, following this and reading some of the linked threads shows me how much I have to learn. I came to Blender from C4D, and whilst C4D has a decent material system, and node based was alien to me, I’m getting there, but 3D texturing is a whole new ball game to me. I considered normal maps 3D textures until I saw some of this stuff.

Kudos to all who get it!

Heh. I just posted a question involving volume textures, so this caught my eye. You asked the wrong question

What you’re really asking after is a “Volume map”, and since by definition maps are planar, I’m guessing not. At least in a general sense. After all, your 3d object IS the volume map.

Of course I could be a billion percent wrong. But here’s my thought… A point-density map would serve the purpose. Take a 3x array (U, V, W, in this case) and pack each coordinate with the values for location, property, and area of effect. Something like the 3d filters Photoshop uses, I think.

You mentioned rock strata, which minded me that geological mapping works something like that. Again I could be way off base, but it sounds feasible. If I knew better how to manipulate the geometry via scripting, I might be tempted to give it a try.